A Closer Look at an Interstellar Comet

The interest in ‘Oumuamua and comet 2I/Borisov makes it clear that interstellar neighbors wandering into our system generate loads of media coverage. And why not: Here is a way to study material from another stellar system while remaining within our own. 2I/Borisov, for example, reaches its closest approach to Earth in early December, closing to within roughly 300 million kilometers. Whatever pushed an object like this out of the parent system cannot be known, but we’re likely dealing with gravitational disruption related to planets in the birth system. But more about that in a moment.

For thanks to Yale University astronomers Pieter van Dokkum, Cheng-Han Hsieh, Shany Danieli, and Gregory Laughlin, we have a fine new image of 2I/Borisov. This was taken on November 24 using the W.M. Keck Observatory’s Low-Resolution Imaging Spectrometer in Hawaii. The tail of the comet, according to van Dokkum, is about 160,000 kilometers long. Note the size comparison below to be reminded, as always, of the immensity of the objects we routinely study in the sky. For those of us who occasionally get jaded, here is another corrective. 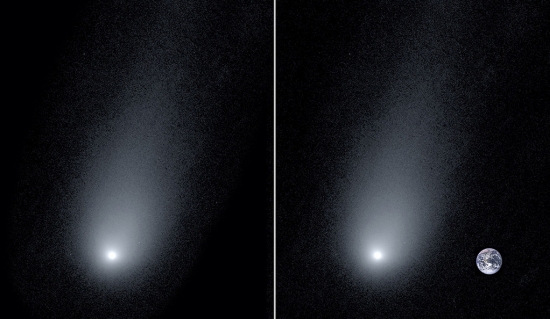 Image: Left: A new image of the interstellar comet 2l/Borisov. Right: A composite image of the comet with a photo of the Earth to show scale. (Pieter van Dokkum, Cheng-Han Hsieh, Shany Danieli, Gregory Laughlin).

Gregory Laughlin points out that 2I/Borisov is evaporating as it moves through the Solar System, releasing the gas and dust so visible in its tail. Says Laughlin: “Astronomers are taking advantage of Borisov’s visit, using telescopes such as Keck to obtain information about the building blocks of planets in systems other than our own.” So true, and what an opportunity we’re opening up as we begin what will become the more routine study of such objects.

Bear in mind that according to a current Laughlin paper, written with Yale graduate student Malena Rice, we can expect a few such objects showing up every year, with much smaller (and therefore all but impossible to detect) objects coming into the Solar System in the hundreds per year. The duo studied three protoplanetary disks from the Disk Substructures at High Angular Resolution Project (DSHARP). Says Rice:

“We were looking for disks in which it was pretty clear a planet was there. If a disk has clear gaps in it, like several of the DSHARP disks do, it’s possible to extrapolate what type of planet would be there. Then, we can simulate the systems to see how much material should be ejected over time…This is actual material that makes up planets in other solar systems, being flung at us. It’s a completely unprecedented way to study extrasolar systems up close — and this field is going to start exploding with data, very soon.”

The paper on the frequency of interstellar objects is Laughlin & Rice, “Hidden Planets: Implications from ‘Oumuamua and DSHARP,” Astrophysical Journal Letters Vol. 884, No. 1 (10 October 2019). Abstract / Preprint.