Calling it a ‘chance discovery,’ the University of Warwick’s Boris Gänsicke recently presented the results of his team’s study of some 7,000 white dwarf stars, all of them cataloged by the Sloan Digital Sky Survey. One drew particular interest because chemical elements turned up in spectroscopic studies indicating something unusual. Says Gänsicke, “We knew that there had to be something exceptional going on in this system, and speculated that it may be related to some type of planetary remnant.”

And that makes the star WDJ0914+1914 an example of what a stellar system that survived, at least partially, the red giant phase of its host star might look like as a planet orbits the Earth-sized white dwarf. This work, which draws on data from the European Southern Observatory’s X-shooter spectrograph at the Very Large Telescope in Chile, confirms hydrogen, oxygen and sulphur associated with the white dwarf, all found in a disk of gas around the star rather than being present in the white dwarf itself. Subsequent work determined that the only way to produce this particular disk configuration was through evaporation of a giant planet. 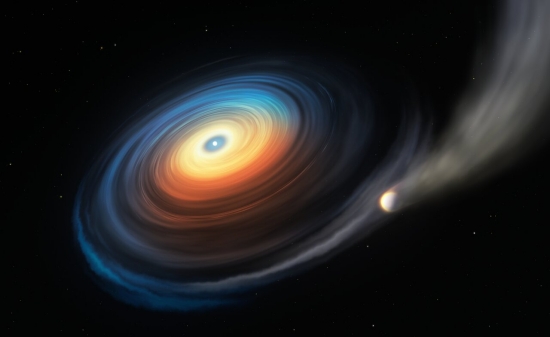 Thus this white dwarf makes history as the site of the first detection of a surviving giant planet around this class of star. You’ll recall previous work on white dwarf atmospheres, which has given us a look at the composition of infalling material that may have been the result of the breakup of a planet, comet or asteroid (see, for example, Survivors: White Dwarf Planets).

But now we’re looking at an actual planet in the act of shedding material while still retaining its structure. The oxygen, hydrogen and sulphur found here are similar to what we see in the deeper atmospheric layers of Neptune and Uranus. Placing such a planet in a tight orbit around a white dwarf would cause high levels of ultraviolet radiation to strip away the outer atmospheric layers, creating the same kind of disk we find at WD J0914+1914.

The star’s temperature is estimated at 28,000° Celsius, while the planet is at least twice as large as the star it orbits, a world whose atmosphere is being depleted due to interactions with the star’s high energy photons. While most of the gas escapes, about 3,000 tonnes per second fall onto the disk, which is what makes the presence of the planet accessible to observers. 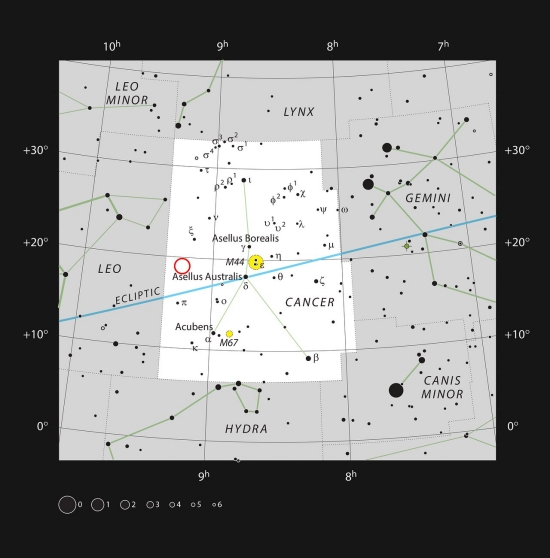 The planet orbits the primary at a scant 15 times the stellar radius, meaning it is 10 million kilometers away from the star, in a place that would have once been deep inside the red giant that was the white dwarf’s progenitor. The assumption here is that the planet moved closer to the star after the white dwarf had formed, perhaps through gravitational interactions with other worlds in this system. We also get a glimpse of this system’s future in the paper:

Gravitational interactions in multi-planet systems can perturb planets onto orbits with peri-centres close to the white dwarf, where tidal effects are likely to lead to circularisation of the orbit. Common envelope evolution provides an alternative scenario to bring a planet into a close orbit around the white dwarf, though it requires rather fine-tuned initial conditions and only works for planets more massive than Jupiter… As the white dwarf continues to cool, the mass loss rate will gradually decrease, and become undetectable in ~ 350 Myr… By then, the giant planet will have lost ∼ 0.002 Jupiter masses (or ∼ 0.04 Neptune masses), i.e. an insignificant fraction of its total mass.

The paper also notes a possible analogue to WD J0914+1914 in HAT-P-26b, a Neptune-mass planet orbiting a K-class star with a period of 4.26 days, adding that despite its high temperature, the small radius of WD J0914+1914 would make its planet cooler than the equivalent around a main sequence star. As to how common such planets may be, of the 7,000 white dwarfs examined by this study, only one planet has emerged. The authors point out that we can look forward to studying the roughly 260,000 white dwarfs identified by the Gaia mission, and thus could well find in this larger sample enough planets to make comparative study possible.