As if I don’t have enough trouble figuring out acronyms, I now have to figure out how to pronounce acronyms. The issue comes up because a new NASA instrument now in use at Kitt Peak National Observatory is a spectrograph built at Penn State called NEID. Now NEID stands for NN-EXPLORE Exoplanet Investigations with Doppler spectroscopy. Here we have an acronym within an acronym, for NN-EXPLORE itself stands for the NASA-NSF Exoplanet Observational Research partnership that funds NEID.

Here’s the trick: The acronym NEID is not pronounced ‘NEE-id’ or ‘NEED’ but ‘NOO-id.’ The reason: Kit Peak is on land owned by the Tohono O’odham nation, and the latter pronunciation honors a verb that means something close to ‘to see’ in the Tohono O’odham language.

As a person fascinated with linguistics, I’m delighted to see this nod to a language whose very survival is threatened by the small number of speakers (count me as one infinitely cheered by the resurrection of Cornish, for example). And as one absorbed with exoplanet science, I note that NEID first light results were discussed at the recent meeting of the American Astronomical Society in Honolulu. The instrument is mounted on the WIYN 3.5-meter telescope at Kit Peak. The first observations were of 51 Pegasi, the first main sequence star found to host an exoplanet.

Here we’re in the realm of using radial velocity measurements to ferret out the slight stellar motion that indicates planets. The better we get at doing radial velocity calibration, the better, not only because we can discover new planets, but because we can use the method to characterize already known worlds. Thus TOI 700 d, that interesting habitable zone world we looked at yesterday, is a case of discovery by transit methods, but having measured its size, we can now use followup radial velocity readings to get a read on its density. 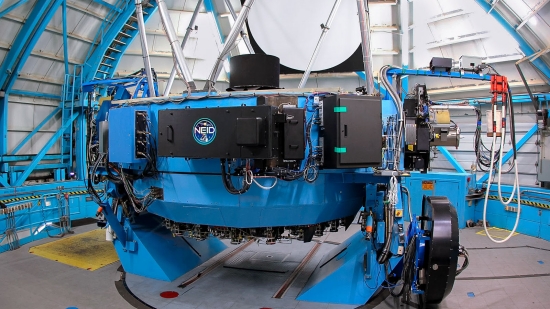 With NEID, we continue the movement in radial velocity studies down to measurements well below 1 meter per second. Long-time Centauri Dreams readers will know that for a long time, the HARPS spectrograph (High Accuracy Radial velocity Planet Searcher) at the ESO La Silla 3.6m telescope, has been considered the gold standard, taking us down to 1 meter per second, meaning that scientists could discern via Doppler methods the tiny pull of a planet on the star first towards us, and then away from Earth. The ESPRESSO instrument (Echelle Spectrograph for Rocky OxoPlanet and Stable Spectroscopic Observations) installed at the European Southern Observatory’s Very Large Telescope in Chile, takes us into centimeters per second range, which means detecting Earth-size habitable zone planets around Sun-like stars. 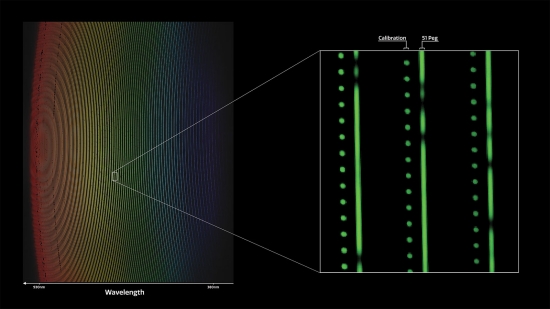 Image: The left side of this image shows light from the star 51 Pegasi spread out into a spectrum that reveals distinct wavelengths. The right-hand section shows a zoomed-in view of three wavelength lines from the star. Gaps in the lines indicate the presence of specific chemical elements in the star. Credit: Guðmundur Kári Stefánsson/Princeton University/NSF’s National Optical-Infrared Astronomy Research Laboratory/KPNO/NSF/AURA.

Can NEID likewise reach the realm of centimeters per second? At the AAS meeting, researchers described the instrument they are calling an ‘extreme precision Doppler spectrograph.’ Exploring radial velocity detection in this realm will demand the upgrades the NEID team has made to the observatory, allowing the spectrograph to achieve room temperature fluctuations below +/-0.2 degrees Celsius in the short term.

Vibration from the WIYN telescope also must be taken into account using high-precision accelerometers and speckle imaging data taken on-sky to achieve the needed precision. The team believes the instrument is capable of reaching 27 centimeters per second and perhaps lower. The goal of the ESPRESSO group is 10 centimeters per second. As we explore the capabilities of both instruments, we are revitalizing radial velocity and making it ever more relevant to the quest to discover and characterize small worlds that may support liquid water.