The dataflow from New Horizons has been abundant enough that we are now drilling down to atmospheric models that may explain the dwarf planet’s topography. Mention topography on Pluto and the first thing that leaps to mind is Tombaugh Regio, and a new paper in the Journal of Geophysical Research Planets actually takes us into its role in the formation of regional weather patterns on the icy orb. For at the heart of Pluto’s weather appears to be the terrain often called Pluto’s ‘heart,’ from the distinctive shape it imposes upon the landscape.

Pluto’s atmosphere, 100,000 times thinner than ours, is primarily nitrogen, with but small amounts of carbon monoxide and methane. Tombaugh Regio is covered by nitrogen ice, which warms during the day, turning to vapor that condenses in Pluto’s night to once again form ice. The researchers, led by Tanguy Bertrand, an astrophysicist and planetary scientist at NASA’s Ames Research Center in California and the study’s lead author, liken the process to a heartbeat that drives nitrogen winds around Pluto. And here we run into a distinct oddity.

For the paper suggests that this cycle actually produces retro-rotation in Pluto’s atmosphere, so that it circulates in a direction opposite to the dwarf planet’s spin. Air moving past the surface shifts not just heat but grains of ice and haze particles, resulting in the dark wind streaks and plains found across the north and northwestern regions of Tombaugh Regio. Here’s Bertrand on the matter:

“This highlights the fact that Pluto’s atmosphere and winds – even if the density of the atmosphere is very low – can impact the surface. Before New Horizons, everyone thought Pluto was going to be a netball – completely flat, almost no diversity. But it’s completely different. It has a lot of different landscapes and we are trying to understand what’s going on there.” 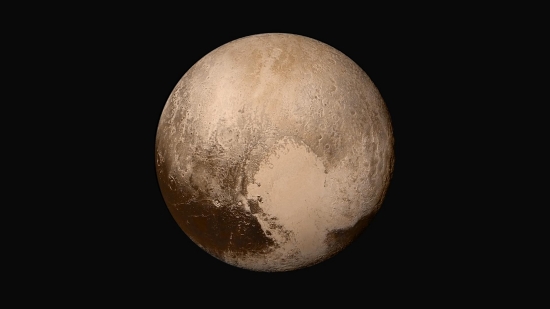 We learn that most of the nitrogen ice on Pluto is found in Tombaugh Regio, where the 3 kilometer deep basin called Sputnik Planitia (the left lobe of the ‘heart’) contains a 1,000 kilometer ice sheet. Next to this, in the right lobe of the ‘heart,’ we find nitrogen-rich glaciers and highlands. The range of landscapes was one of the most intriguing things found when the first close-up images from New Horizons began to come in. Few had expected to find Pluto an active, geologically interesting world.

The team’s work proceeded through the use of simulations of the nitrogen cycle with a weather forecast model that could be analyzed to study the movement of wind across the surface. The paper discusses the methods at work here:

We used the GCM [Global Climate Model] to investigate different surface-atmosphere interactions involving the near-surface winds, such as the effect of the conductive heat flux from the atmosphere, the erosion of the ice, and the transport of ice grains and dark materials. We find that the cumulative effect of these mechanisms could induce significant contrasts in ice sublimation rate and color, and could explain the formation of the bright and dark plains in Sputnik Planitia.

Winds above 4 kilometers in altitude are found to blow to the west, opposite to the planet’s eastern spin, for most of the dwarf planet’s year. Vaporizing nitrogen in the north of Tombaugh Regio turns to ice in the south, triggering these winds. Along the western boundary of Sputnik Planitia, a current of fast-moving air pushes near the surface, the result of the atmospheric nitrogen condensing back into ice, and the trapping of cold air inside the basin, where its circulation allows it to strengthen as it moves through high cliffs in the area. The western boundary current is strong and is clearly related to the specific terrain it flows across.

As to retro-rotation, it’s unusual, although perhaps not unique. From the paper:

This retro-rotation of Pluto’s atmosphere is a unique circulation regime in the Solar system, except maybe on Triton, where pole-to-pole transport of N2 could also lead to a similar regime. We find that the retro-rotation is maintained during most of Pluto’s year. It could be responsible for many longitudinal asymmetries and geological features observed on Pluto’s surface, such as the depletion of Bladed Terrains at eastern longitudes and the formation of bright pits in eastern Tombaugh regio, although this remains to be explored. Our work confirms that despite a frozen surface and a tenuous atmosphere, Pluto’s climate is remarkably active.

We can only imagine how different Pluto’s surface would look with different wind patterns as we consider Sputnik Planitia and contrast the dark plains and wind streaks to its west. What a curious place Pluto turns out to be, and what a role Sputnik Planitia plays. Says Bertrand:

The New Horizons dataset will be producing papers for many years to come. Oh for a similar mine of information about Triton!

Next post: In the Days before Centauri Dreams… An Essay by WDK