A Nearby ‘Planet’ in Formation

330 light years from the Sun is the infant planet 2MASS 1155-7919 b, recently discovered in Gaia data by a team from the Rochester Institute of Technology. It’s a useful world to have in our catalog because we have no newborn massive planet closer to Earth than this one. Circling a star in the Epsilon Chamaeleontis Association, 2MASS 1155-7919 b is thought to be no more than 5 million years old, orbiting its host at roughly 600 times the Earth/Sun distance. A stellar association like Epsilon Chamaeleontis is a loose cluster, with stars that have a common origin but are no longer gravitationally bound as they move in rough proximity through space.

“The dim, cool object we found is very young and only 10 times the mass of Jupiter, which means we are likely looking at an infant planet, perhaps still in the midst of formation. Though lots of other planets have been discovered through the Kepler mission and other missions like it, almost all of those are ‘old’ planets. This is also only the fourth or fifth example of a giant planet so far from its ‘parent’ star, and theorists are struggling to explain how they formed or ended up there.” 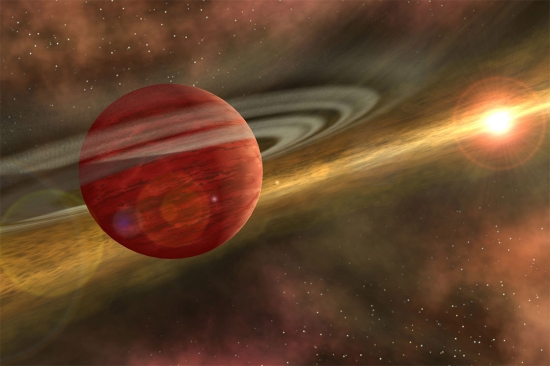 Image: Artist’s conception of a massive planet orbiting a cool, young star. In the case of the system discovered by RIT astronomers, the planet is 10 times more massive than Jupiter, and the orbit of the planet around its host star is nearly 600 times that of Earth around the sun. NASA/JPL-Caltech/R. Hurt (SSC-Caltech).

So a star a thousand times younger than the Sun has produced a giant planet far enough from its star to challenge our models of gas giant formation. But is it actually a planet?

The origins of systems involving such wide-separation substellar objects are presently the subject of vigorous debate (Rodet et al. 2019, and references therein). Given that 2MASS 1155-7919 b is quite possibly the youngest massive planet within ~100 pc—i.e., closer to Earth than the aforementioned massive young planets, as well as nearby star-forming clouds—this object is richly deserving of followup spectroscopy and imaging aimed at confirming its spectral type, age, and luminosity, in order to better understand its nature and origin.

Despite its unusual interest, the paper also reminds us, 2MASS J1155-7919 b joins other systems with wide separation, such worlds as HD 106906 b, 1RXS 1609 b, CT Cha b, and DENIS1538-1038. The fact that the latter two are thought to be brown dwarf candidates highlights the idea that such objects may form like low-mass stars, although the physical processes at work in their accretion and development are poorly understood. Here I’m going to switch to a different paper, this one on DENIS1538−1038 (Nguyen-Thanh et al., citation below).

The authors of the 2MASS J1155-7919 b discovery paper point out that their putative gas giant is only slightly below the boundary between brown dwarfs and massive planets, making the above brown dwarf formation scenario a possibility. In either case, we have much to learn about widely separated objects in the same system when we find them this early in their evolution. The intellectual ferment in this area is exciting to watch.

The paper is Dickson-Vandervelde et al., “Identification of the Youngest Known Substellar Object within ~100 pc,” Research Notes of the AAS Vol. 4, No. 2 (7 February 2020). Full text. The Nguyen-Thanh et al paper is “Sporadic and intense accretion in a 1 Myr-old brown dwarf candidate,” in process at Astronomy & Astrophysics (preprint).