Learning about the climate on exoplanets is not something that the designers of ESPRESSO had in mind. Installed at the European Southern Observatory’s Very Large Telescope at Paranal (Chile), the Echelle SPectrograph for Rocky Exoplanet and Stable Spectroscopic Observations combines the light of the four VLT telescopes, making it a powerful instrument indeed. We have what is in effect a 16-meter telescope that really ramps up the capability of radial velocity methods.

But climate? The case in point is WASP-76b, some 390 light years away in Pisces. So much of the excitement surrounding ESPRESSO has been its ability to drill down to detect small, rocky exoplanets, but this world is somewhere near Jupiter mass, considerably larger in radius, and hellishly close to its star, an F7-class object about 1.5 times as massive as the Sun. The planet orbits the star every 1.8 days at an orbital distance of 0.03 AU and appears to be tidally locked.

The result: Temperatures in the area of 2,400° C, breaking molecules apart and causing metals to evaporate. Throw in a dark-side temperature of about 1,500° C and you’ve got an incubator for extreme winds carrying iron vapor into the nightside, where it precipitates as what we might call an iron rain. This is more than conjecture, as ESPRESSO is powerful enough to detect a strong iron vapor signature at the edge of this planet’s ‘evening,’ with no such signature on the other side.

“Surprisingly… we don’t see iron vapour on the other side of the planet, in the morning. The conclusion is that the iron has condensed during the night. In other words, it rains iron on the night side of this extreme exoplanet.” 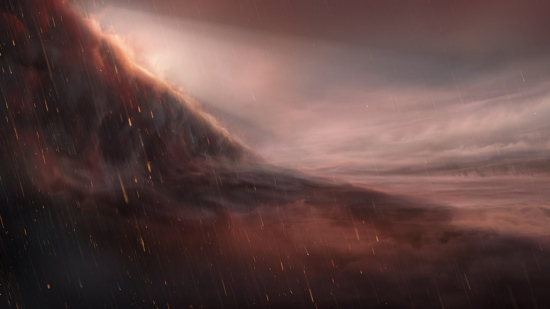 ESPRESSO is just coming into its own. First light occurred in 2017, and the WASP-76b work draws on the first scientific observations made with the instrument in September of 2018. We’re beginning to see that this spectrograph has unusual potential, as principal investigator Francesco Pepe notes:

“We thought very early on that we could use the instrument not only to discover new planets, but also to characterize those that are already known. However, until 2018, we didn’t realise how powerful ESPRESSO really was in this field.”

Climatology on extreme planets makes that case, and we can assume WASP-76b is only the first such investigation. Meanwhile, we continue to witness the ever increasing power of radial velocity methods, which measure tiny variations in the Doppler signature of stars as they are pulled back and forth by the planetary systems around them.

Transiting worlds have been of crucial assistance as we have built up the exoplanet catalog, but radial velocity can measure planets that do not cross the face of their star as seen from Earth. Moving beyond detection levels of 1 meter per second, the new goal is 10 centimeters per second and below, a radial velocity precision sufficient to detect an Earth-mass planet in the habitable zone of a small star.

And we should note this, from the journal: “This is an unedited manuscript that has been accepted for publication. Nature Research are providing this early version of the manuscript as a service to our customers. The manuscript will undergo copyediting, typesetting and a proof review before it is published in its final form. Please note that during the production process errors may be discovered which could affect the content, and all legal disclaimers apply.”

In the era of easily available preprints, we always have to keep in mind the consequences of authorial and editorial changes later in the process. These can sometimes be significant.