Extending the Hunt for Trans-Neptunian Objects

316 Trans-Neptunian Objects (TNOs) have turned up in a new analysis of data from the Dark Energy Survey, 139 of these being new objects that have not been previously published in the literature. With roughly 3,000 TNOs known, the catalog from this work represents a healthy 10 percent of the total, but more significantly, extends and fine-tunes our methods for tracking such objects.

Trans-Neptunian Objects, of which Pluto/Charon represents the best known, orbit beyond Neptune, with Kuiper Belt Objects being a sub-category existing between 30 and 55 AU from the Sun. Here the population is thought to be in the tens of thousands when restricting the definition by size to objects at least 100 kilometers across. But to these Kuiper Belt objects we can add the population of so-called Scattered Disk Objects, which exist in eccentric and inclined orbits, the more extreme of these with semi-major axes between 150 and 250 AU (and then there’s Sedna, with aphelion now estimated at more than 900 AU).

Carly Howett’s excellent overview of TNOs from the Southwest Research Institute (Boulder, CO) explains their wide-range and is highly recommended. For now, let’s focus on the DES dataset and the catalog that is growing out of it. The Dark Energy Survey wasn’t created to be a hunter of minor planets but rather an attempt to map hundreds of millions of galaxies while detecting supernovae in the thousands, the idea being to find patterns of cosmic structure that may give us insights into the ‘dark energy’ that seems to be accelerating the universe’s expansion.

DES is an international effort, with over 400 scientists from 25 institutions around the world using data collected by a highly sensitive 570-megapixel digital camera called DECam that is mounted on the Blanco 4-meter telescope at Cerro Tololo Inter-American Observatory in the Chilean Andes. Between 2013 and January of 2020, the collaboration carried out a wide-area survey, imaging 5000 square degrees of the southern sky in five optical filters.

“Dedicated TNO surveys have a way of seeing the object move, and it’s easy to track them down. One of the key things we did in this paper was figure out a way to recover those movements [in the DES dataset].”

Exactly so. What Bernardinelli and team had to construct was a methodology that could tackle deep-sky DES data and apply them to the TNO question. Unlike DES, TNO surveys generally take measurements as frequently as hourly, allowing astronomers to track object movements against the background field. Adapting DES data was a challenge. Working with the first four years of the DES images, Bernardinelli extracted an initial dataset of 7 billion ‘dots’ that represented objects detected by his software above the background levels of the images. 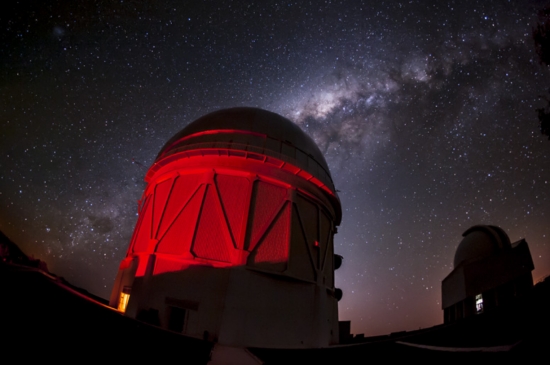 The researcher was able to build a ‘transient’ list of 22 million objects by culling out stars, galaxies and supernovae; he then began looking for movement on successive nights. 400 candidates emerged out of the 22 million-object field, all of them seen over at least six nights of observation and subsequently subjected to filtering and verification. The latter involved going back to the original dataset to see if more images of the object in question could be located.

Previously known TNOs were likewise useful, their location examined for 25 different nights as the researchers gathered information that helped them adjust their models. Stacking multiple images helped to confirm an object’s TNO status, while injecting fake objects into the analysis served as a check on how the methods handled them. The 316 TNOs isolated by this period of development and analysis revealed objects from 30 to 90 times Earth’s distance from the Sun. 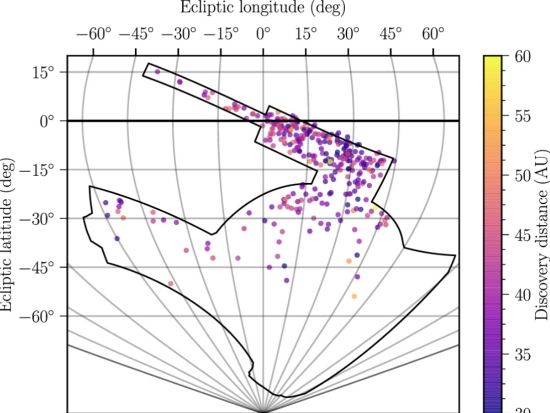 Image: The location of the objects found in the first four years of DES data. The outline shows DES’s search range and the color of each dot shows how far away the object is in astronomical units. Two of the detections were more than 90 AU, or almost 13 billion kilometers away. Credit: Pedro Bernardinelli.

Ahead for this team is an analysis incorporating the last two years of the DES dataset, with a lower threshold for object detection at the first filtering stage. As many as 500 new TNOs, the researchers estimate, may turn up in this work. The hope is that the programs the team has developed will now be useful when applied to other large datasets in the future. Remember that the orbits of the various categories of TNO help us to analyze as yet unseen objects beyond Pluto’s orbit that may include the hypothesized ‘Planet Nine,’ so the more TNOs, the better.

Next post: Ryugu’s Clues to the Early Solar System