We have all too little information about the heliosphere, the only data from beyond it being what we have collected from the two Voyagers. Altogether, only five spacecraft — Pioneer 10 and 11, the Voyagers and New Horizons — have escaped the gravity of the Sun enroute to interstellar space. To understand how the heliosphere operates, and the interactions between the solar wind of charged particles and magnetic fields with what lies beyond, we’d really like to be able to look back at our system in its entirety. The Interstellar Probe concept being pondered at Johns Hopkins Applied Physics Laboratory and elsewhere is one possible way to do this.

I’ll have more to say about Interstellar Probe in coming days, though I do want to give a nod to its history, which can be traced as far back as 1958 and a report from the National Academy of Sciences. APL’s Ralph McNutt has been studying interstellar concepts for decades, and was a major source as I worked on my original Centauri Dreams book. It’s important to realize that interstellar studies around mission concepts to get beyond the heliosphere have been in play for a long time, and the next Heliophysics Decadal Survey could contain this one. You might remember that McNutt’s Innovative Interstellar Explorer was an earlier design.

Even now, though, we’re learning more about the heliosphere itself, and that boundary region known as the heliopause, where the solar wind bumps up against the deep currents of the interstellar medium and is shaped by them. Look at an older diagram of the heliosphere and you usually find it depicted with a shape something like a comet, a rounded nose up front and a tail stretching out well behind. Interstellar Probe would reach 1,000 AU and give us that view back that we need to learn more.

But to firm up a mission concept like this, we need more data on the target, and it turns out that the shape of the heliosphere is anything but established. It was in 2015 that Merav Opher (Boston University) and James Drake (University of Maryland) put forth a new computer model that, incorporating Voyager data, suggested a heliosphere shaped something like a crescent, so that instead of a single, comet-like tail, two jets would extend downstream from the nose.

The shape of the heliosphere has been under debate ever since, with Cassini data (based on correlations between particles echoing off the heliopause and ions measured by Voyager) being used to suggest a spherical heliosphere. Both crescent and sphere were controversial, says Voyager veteran and Cassini scientist Tom Krimigis. “You don’t accept that kind of change easily. The whole scientific community that works in this area had assumed for over 55 years that the heliosphere had a comet tail.”

Now Opher and Drake, working with Harvard’s Avi Loeb and Gabor Toth (University of Michigan), are back with an even more complex possibility. In a paper just published in Nature Astronomy, the scientists distinguish between charged particles from the solar wind and hot ‘pickup’ ions, particles that enter the Solar System in electrically neutral form, only to subsequently lose their electrons. We’ve learned from New Horizons that these particles become far hotter than ordinary solar wind ions as they are carried along within that wind.

Voyager 2’s crossing of the heliosphere boundary showed how pickup ions dominate in the region of the heliosheath, but this paper is the first to explore the impact of pickup ions on the structure of the heliosphere. The authors examine the temperature, density and speed of both groups of particles independently. Their model produces a shape far different from the comet view, a rounder, baggy-looking topology that only vaguely preserves a crescent and one that can be further manipulated by how we define the heliosphere’s edge. Have a look. 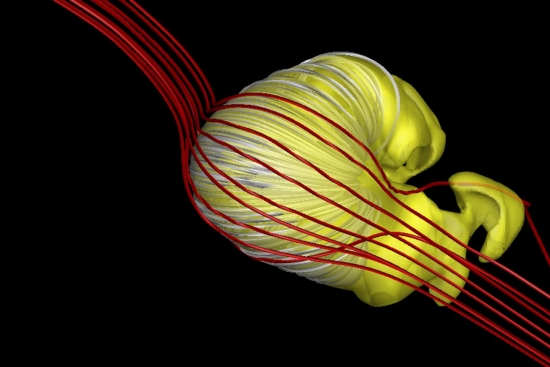 And let’s contrast this with the older view, at the left in this figure from the paper. In the caption, the reference to ‘case B’ notes one of two cases run in the scientists’ model, based on the fact that the interstellar magnetic field strength and direction are not well constrained (another reason for a properly instrumented probe in this region). For more on the distinction between the two cases, see the paper (citation below).

Image: This is Figure 4 from the paper. Caption: The new heliosphere. a, The HP [heliopause] is shown by the yellow surface (case B) defined by a solar wind density of 0.005 cm−3. The white lines represent the solar magnetic field. The red lines represent the interstellar magnetic field. b, The standard view of a comet long tail extending thousands of astronomical units. V1 and V2 are shown in this artist rendition; V2 has now passed the HP. The yellow dot represents the Sun. The supersonic solar wind region is represented by the blue region around the Sun. The extended region beyond the blue region represents the HS [heliosheath]. Credit: NASA/JPL-Caltech / Opher et al.

The authors describe the heliosphere’s shape as:

…a more ‘squishable’ heliosphere that has a smaller and rounder shape (Fig. 4a). This global structure is drastically different from the standard picture of a long heliosphere with a comet-like tail that extends to thousands of astronomical units (Fig. 4b). The distance from the Sun to the HP in the new round heliosphere is nearly the same in all directions.

Building a spacecraft like the APL Interstellar Probe would allow us to put instruments specifically designed for operating in this environment into play, among other things detecting pickup ions near the heliopause. This will further refine the heliosphere’s shape and also allow us to better compare our own heliosphere with those around other stars. There are astrobiological implications here, for the heliosphere deflects charged particles that could disrupt DNA. How interstellar particles enter stellar systems could thus play a role in evolution.

The paper is Opher et al., “A small and round heliosphere suggested by magnetohydrodynamic modelling of pick-up ions,” Nature Astronomy 16 March 2020 (abstract).