One reason I wanted to run yesterday’s article about the Opher et al. paper on the heliosphere, aside from its innate scientific interest (and it is a very solid, well crafted piece of work) is to illustrate how much we still have to learn about the balloon-like bubble carved out by the solar wind. The entire Solar System fits within it easily, but we observe only from inside and have little knowledge of its structure. None of the paper’s authors would argue that we have the definitive answer on the shape of the heliosphere. That will take a good deal more data, as the paper notes:

Future remote-sensing and in situ measurements will be able to test the reality of a rounder heliosphere. In Fig. 6, we show our prediction for the interstellar magnetic field ahead of the heliosphere at V2. In addition, future missions such as the Interstellar Mapping and Acceleration Probe will return ENA [energetic neutral atom] maps at higher energies than present missions and so will be able to explore ENAs coming from deep into the heliospheric tail. Thus, further exploration of the global structure of the heliosphere will be forthcoming and will put our model to the test.

We’ll learn more from the Voyagers, in other words, as well as from IMAP (more about this one in a later article), New Horizons, and whatever probe we next send out to system’s edge. Our two Voyager spacecraft may well last another seven years, which would give them 50 years of data return since their launch in 1977. 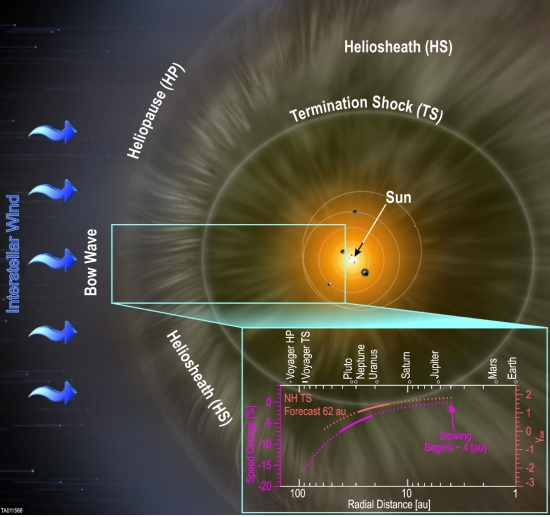 Image: And here’s something we’ve learned from New Horizons. The SWAP instrument aboard the spacecraft has confirmed that the solar wind slows as it travels farther from the Sun. This schematic of the heliosphere shows the solar wind begins slowing at approximately 4 AU radial distance from the Sun and continues to slow as it moves toward the outer solar system and picks up interstellar material. Current extrapolations reveal the termination shock may currently be closer than found by the Voyager spacecraft. However, increasing solar activity will soon expand the heliosphere and push the termination shock farther out, possibly to the 84-94 AU range encountered by the Voyager spacecraft. Credit: Southwest Research Institute; background artist rendering by NASA and Adler Planetarium.

The interstellar probe NASA has been contemplating, under study at various centers but most visibly at the Johns Hopkins Applied Physics Laboratory (APL) would, unlike Voyager, be built from the start with a 50 year goal in mind. Voyager 1 is now about 141 AU from Earth (21.2 billion kilometers). Interstellar Probe (APL capitalizes its design) would go for 1000 AU, but at much improved speeds, reaching the distance in 50 years.

How to do this? For one thing, achieve a boost from one of the huge rockets now coming onto the market, perhaps NASA’s own Space Launch System (SLS), or a commercial entry from a private company, perhaps SpaceX or Blue Origin. We’re not talking about launching until 2030, and that’s assuming the mission gets the green light in the upcoming heliophysics decadal survey, which will put in place missions related to the Sun over a ten year period.

A gravity assist at Jupiter added on to its kick from a massive booster would put us in familiar territory, given Jupiter’s history of flinging spacecraft like Voyager and New Horizons on their way, but a solar gravity assist is also contemplated, one that would take Interstellar Probe a good deal closer to the Sun than the Parker Solar Probe. You’d think closer is better, but at this stage in our technology, the perihelion numbers will be decided by factoring the weight of the required heat shielding. A balancing act ensues to get the most bang for the buck.

Exactly which instruments would fly on this modern era Voyager Plus would depend upon how instrument packages can be combined to save mass while maximizing power and data rates on the communications side. If you have a look at the APL page devoted to Interstellar Probe, you’ll see a notional payload, meaning this is what we’d like to cover with an ideal probe. The instrumentation includes:

A particle and fields suite for exploring the interstellar medium and its interaction with the heliosphere, with detectors such as:

Beyond the particle and fields instrumentation, the probe should include:

We know that Voyager 1 and 2 have both left the heliosphere, Voyager 1 in August of 2012 and Voyager 2 in November of 2018, the two craft on widely divergent trajectories (recall Voyager 1’s dogleg at Saturn to get a look at Titan, whereas Voyager 2 moved on for close passes at Uranus and Neptune). Yesterday’s paper offered a new proposal for the shape of the heliosphere which is rather interesting in this regard. If the heliosphere really is more circular, lacking that presumed cometary ‘tail,’ then getting outside it won’t necessarily be determined by what would have been considered the shortest route, avoiding a tail that was estimated to trail thousands of AU. Here astrophysics and engineering work together in the choice of optimum trajectories.

Yesterday we looked at the need to get beyond the heliosphere so we could study its structure and gain insights into other planetary systems. But there are other reasons that take us much farther afield. It’s worth remembering that within the heliosphere, we have to contend with the foreground infrared radiation from dust within the Solar System, known as the zodiacal cloud. Going beyond the heliosphere opens up the possibility of studying diffuse infrared radiation from other stars and galaxies that has been effectively blocked for us by that cloud.

We also get a look at the nature of the dust disk, one that we can observe around other stars but are unable to measure in terms of large-scale structure from within our own. Learning how the Sun affects the structure of the heliosphere will help us understand the dynamics of other stellar systems, and the data a probe like this will take will be crucial at defining the local interstellar medium, through which our much longer-range probes will eventually move.

Needless to say, a great deal of science can be accomplished along the way. Interstellar Probe would reach the Kuiper belt in a scant four years, where flybys of KBOs and long-range observation of the environment there would complement and extend what we are learning from New Horizons. The APL trade study is designed to craft “a realistic mission architecture that includes available (or soon-to-be available) launch vehicles, kick stages, operations concepts and reliability standards.” All of this produces the reference materials that will be needed for the science and technology definition team that will turn aspirations into hard designs.

We should always be thinking about the kinds of mission that might one day fly, the long-range improvements that can enable them, and the audacious targets we someday want to reach. But as we draw up these conjectures and think about eventually engineering them, we also must be thinking about the kind of missions that can fly today. An interstellar probe of the kind now under study at APL and other NASA centers was a part of the discussion for the last decadal survey, but only now are we reaching a technological level to make 1000 AU in 50 years possible.

We need these early steps to make the broader strides that will occur later, on a path toward a Solar System infrastructure that will eventually support probes into the Oort Cloud and one day beyond. So tracking the fortunes of Interstellar Probe will be a priority for Centauri Dreams in coming months.

Next post: Voyager 2: Digging Deeper into the Data from Uranus