Voyager 2: Digging Deeper into the Data from Uranus

Voyager 2’s flyby of Uranus and its moons occurred on January 24, 1986, returning images that for many of us will always be associated with the outpouring of grief over the loss of Challenger, which occurred a scant four days later. But Voyager’s data were voluminous, its images striking, as we examined the ice giant and its unusual moons up close. The spacecraft closed to 81,500 kilometers of the cloud tops, examining the ring system and discovering 11 new moons. 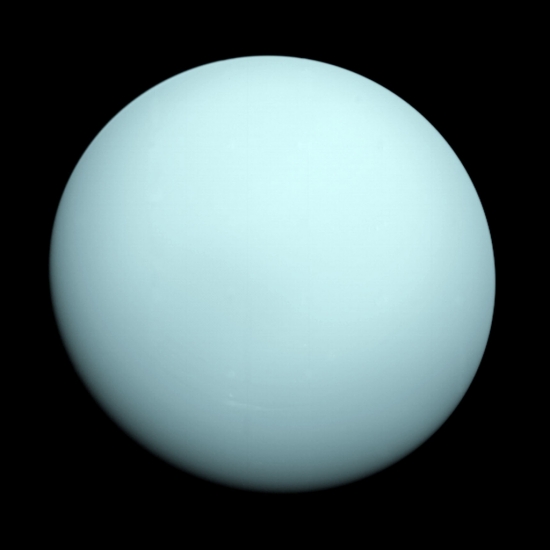 Image: The planet Uranus, in an image taken by the spacecraft Voyager 2 in 1986. The Voyager project is managed for NASA by the Jet Propulsion Laboratory. Credit: NASA/JPL-Caltech.

Uranus was already known from early analysis of the Voyager data to have an odd magnetosphere, created where solar wind plasma interacts with the planet’s magnetic field. The planet spins on its side, and its magnetic field axis is tilted 60 degrees away from its spin axis, producing a magnetosphere that wobbles in ways that researchers liken to a poorly thrown American football. Modeling a magnetosphere like this is no easy task, but we’d like to know more because these interactions with the solar wind affect local space and the circulation of plasma, with a known effect on atmospheric plasma escape.

Now we learn from a new paper taking a deeper look at the Voyager magnetometer data that the spacecraft’s passage past Uranus took it through a type of magnetic ‘bubble’ called a plasmoid, one that needs to be factored into our understanding of the planet’s magnetic environment. The paper calls plasmoids ‘helical bundle[s] of magnetic flux’ that pinch off the end of a planet’s magnetotail, as the magnetosphere is shaped and pushed by the Sun.

To turn up the plasmoid, a phenomenon little studied at the time of the flyby, authors Gina DiBraccio and Dan Gershman, both at Goddard Space Flight Center, fine-tuned the analysis of the magnetometer data by plotting new datapoints every 1.92 seconds. What they found was a quick blip that occupied 60 seconds out of a total 45-hour flyby, but it revealed a plasmoid believed to consist mostly of ionized hydrogen some 200,000 kilometers long and 400,000 kilometers across.

Plasmoids are interesting here and elsewhere because by drawing ions out of a planet’s atmosphere, they alter its composition. They’ve shown up from Mercury to Saturn and have been observed at Earth, but this is the first time one has been identified at Uranus. The smooth, closed magnetic loops the scientists found are characteristic of plasmoids formed as a rotating planet loses atmosphere to space. Says Gershman: “Centrifugal forces take over, and the plasmoid pinches off.”

This is the first observation of a plasmoid in an ice giant magnetosphere. Should we expect the same thing to occur at Neptune? From the paper:

Although no relevant measurements are available for Neptune due to the 1989 Voyager 2 flyby trajectory [Stone and Miner, 1989], we suggest that its systematic mass loss may include a significant plasmoid contribution as well. Similar to Uranus, Neptune’s magnetosphere exhibits a large variance between the rotation and magnetic axes at an angle of ~47. However, in contrast to Uranus, Neptune’s rotation axis is not aligned with the solar wind (~30 inclination). This difference may allow for internal effects to play a larger role in mass loss and overall plasma convection. For this reason, unlike at other magnetospheres throughout the solar system, the planet’s rotation and solar wind forcing may have nearly equal contributions to the energy and plasma input at Uranus and Neptune.

It’s clear that circulation within the magnetosphere and the processes of atmospheric loss are major topics for both of our ice giants, leading the authors to note the importance of new in situ measurements “to definitively determine the relative contributions of planetary rotation and solar wind forcing in driving global plasma dynamics…” For now, the ice giants remain mysterious, revealing themselves only through our single Voyager flyby.

Next post: Introducing the Q-Drive: A concept that offers the possibility of interstellar flight