As we improve our instrumentation, the search for worlds where life can flourish will generate more and more Earth-sized targets for extended investigation. Here time plays an interesting role, for our own planet seen two billion years ago would present a different aspect than the Earth of today. Atmospheres evolve, a fact that Lisa Kaltenegger has studied in a series of papers in recent years, working with colleagues at Cornell’s Carl Sagan Institute, where she is director. The result is a series of spectral templates applicable to Earth-like planets at various stages of evolution.

We have only one known example of a living planet to work with, so Kaltenegger’s atmospheric models are designed to match the Earth at different stages of development. The prebiotic Earth of 3.9 billion years ago is saturated with carbon dioxide, while what the paper refers to as Epoch 2, some 3.5 billion years ago, is a world without oxygen. Three more epochs can be defined covering the rise of atmospheric oxygen, from levels below 1 percent beginning about 2.4 billion years ago (the Grand Oxygenation Event) to 10 percent oxygen (the Neoproterozoic Oxygenation Event) and the modern Earth atmosphere with oxygen levels at 21 percent. 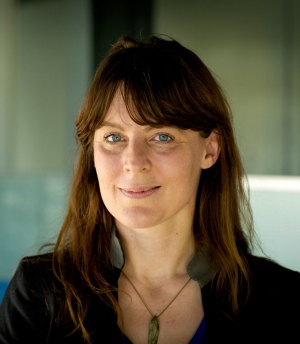 “Using our own Earth as the key, we modeled five distinct Earth epochs to provide a template for how we can characterize a potential exo-Earth – from a young, prebiotic Earth to our modern world,” Kaltenegger said. “The models also allow us to explore at what point in Earth’s evolution a distant observer could identify life on the universe’s ‘pale blue dots’ and other worlds like them.”

The resulting database draws on a solar evolution model that establishes the solar flux through the epochs described, all applied to a hypothesized planet with the same mass and radius as Earth orbiting at 1 AU from an evolving Sun. Note that in previous work, Kaltenegger and colleagues have developed reflection and emission spectra of Earth through its geological history, and have also applied these data to different classes of host stars. This model is different, in that it’s focused on transmission spectra, meaning we’re looking at what data a transiting planet would present to our spectrographs as the light of its host star passed through its atmosphere.

The high-resolution database that comes out of this work goes through visible wavelengths into the infrared (0.4–20 μm) through geological time. Transmission spectra of this kind are the current tool for probing exoplanet atmospheres and may well be the first derived from Earth-sized worlds in habitable zone orbits.

Throughout the atmospheric evolution of our Earth, different absorption features dominate Earth’s transmission spectrum…with CH4 and CO2 being dominant in early Earth models, where they are more abundant. O2 and O3 spectral features become stronger with increasing abundance during the rise of oxygen (Epoch 3–5). High-resolution (λ/Δλ = 100,000) spectral features that indicate life on Earth —the combination of O2 or O3 with a reducing gas like CH4 or N2O—can be detected for oxygen levels as low as 0.01 present atmospheric levels (0.21% O2), which correspond to a Neoproterozoic Earth model and a time about one to two billion years ago in Earth’s history.

The authors used a climate-photochemistry tool called EXO-Prime to compile the database, noting that its results have been validated for visible to infrared wavelengths when Earth is observed as an exoplanet. We’ve talked in the past about the EPOXI mission’s look back at Earth (see EPOXI: Clues to Terrestrial Worlds), but we also have data from Mars Global Surveyor and numerous Earthshine observations that have demonstrated the tool is robust. The results clearly show how different absorption features dominate the Earth’s spectrum through the course of atmospheric change. 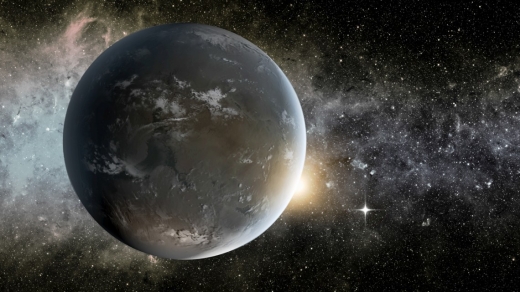 Image: This artistic depiction shows exoplanet Kepler-62f, a rocky super-Earth size planet, located about 1,200 light-years from Earth in the constellation Lyra. Kepler-62f may be what a prebiotic Earth may have looked like. Other exoplanets may look similar. Credit: NASA Ames/JPL-Caltech.

For those wanting to explore these issues further, the high-resolution transmission spectra database can be found online at www.carlsaganinstitute.org/data. The authors see it as a tool for data interpretation as well as optimizing observation strategy and training data retrieval methods as new instruments become available. The work is applicable not only to the introduction of the ground-based Extremely Large Telescopes like the Giant Magellan Telescope and the Thirty Meter Telescope, but also space-based missions like the James Webb Space Telescope as well as future mission concepts like LUVOIR (Large UV Optical Infrared telescope) and HabEx (Habitable Exoplanet Observatory).

Kaltenegger notes that these telescopes will be identifying Earth-like planets out to about 100 light years:

“Once the exoplanet transits and blocks out part of its host star, we can decipher its atmospheric spectral signatures. Using Earth’s geologic history as a key, we can more easily spot the chemical signs of life on the distant exoplanets…Our transmission spectra show atmospheric features, which would show a remote observer that Earth had a biosphere as early as about 2 billion years ago.”

Previous post: Introducing the Q-Drive: A concept that offers the possibility of interstellar flight