Getting Real with the Habitable Zone

Perhaps the most significant paper I have yet to read on the subject of habitable zones has emerged from the University of Oxford, with collateral help from the Lamb and Flag on nearby St. Giles St. (a stout place), along with two scientists who claim no affiliation other than ‘Earth.’ The paper defines the Really Habitable Zone, that region around a star within which acceptable gins and tonic are likely to be found. “We suggest that planets in the Really Habitable Zone be early targets for the JWST, because by the time that thing finally launches we’re all going to need a drink.” Which is so patently true that I can only nod with approval.

Adding that most habitable zone models now in play are defined by the need to justify the budget of the JWST to the US Congress, the authors proceed to note the difficulties in creating a habitable zone definition with which all astronomers can agree. What all astronomers can support, they argue, is a definition of what makes life worth living. Throw in a good infrastructure to support the distribution of limes and you are on your way. 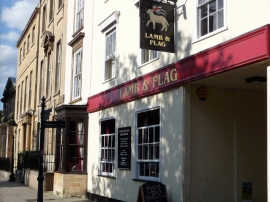 The Really Habitable Zone (RHZ) defined here has a substantial history in the literature, as the authors note:

Astronomers have long been interested in alcohol. Shortly after the introduction of gin to the UK, Flamsteed made the first observations of Uranus but mistook it for a star; we suggest a connection between these two events. In the twentieth century, papers by Coburn (1932) and Phenix & Littell (1933) discuss the use of alcohols to treat photographic plates, though they remain silent on its use in treating astronomers. Ball et al. (1972) detected methanol, though this is – in space, as on Earth – clearly undrinkable. Luckily, Zuckerman et al. (1975) soon found ethanol.

The chain of reasoning is tight. The paper continues:

It is therefore clear that conditions which support the creation of decent beverages will also support astronomers, which is a working definition of civilization. The choice of gin and tonic is based on the work of Adams (Adams 1979), who hypothesised that a drink named something similar existed in 85% of civilizations.

Image: Much of the research for this paper was conducted at the Lamb and Flag in Oxford.

A Minimum Acceptable Gin and tonIC (MAGIC) is defined; here the authors do extol the value of citrus, but being British, they seem unwilling to acknowledge lime as the acidic vehicle of choice, allowing sliced lemon in ways that have bewildered many an American scientist at conferences in the UK. We can expect some spirited pushback from the States in response, as MAGIC is critical for the theoretical and observational definition of the Really Habitable Zone.

As to gin, juniper is acknowledged as the essential ingredient, and an exo-Juniper is defined, with the understanding that its tolerance for varied climatic conditions does not force strong limits on the RHZ, whereas what the authors call ‘ginspermia’ (the transport of juniper berries between the stars) is unlikely on planets with efficient harvesting and maximal gin production. The RHZ is, on the other hand, defined by the necessity for citrus fruits to thrive in a relatively narrow temperature range and a supply of H2O. The authors’ equation 1 encapsulates their assumptions on atmospheric modeling and planetary weather (the equation is, unfortuntely, too baroque to insert easily into the Centauri Dreams format).

The inner RHZ defined here is loosely based on ‘Recent Venus’ work available in the literature. Curiously, the outer edge coefficients of the RHZ equation appear to align with the founding years of a number of well-known gin distilleries, a fact the paper acknowledges but fails to follow up on. Thus the paper’s major shortcoming, described disarmingly by the authors themselves:

We had planned to carry out a statistical test to determine whether the populations of planets within and without the Really Habitable Zone were really different. However, the undergraduate student we’d expected to apply a Bayesian Machine Learning model has stopped answering our emails, so we merely suggest you follow astronomical tradition and look at the graph for a few seconds before drawing sweeping conclusions from it.

And here is the graph. Note that BHZ stands for Boring Habitable Zone, the authors’ term for more conventional models now in circulation: 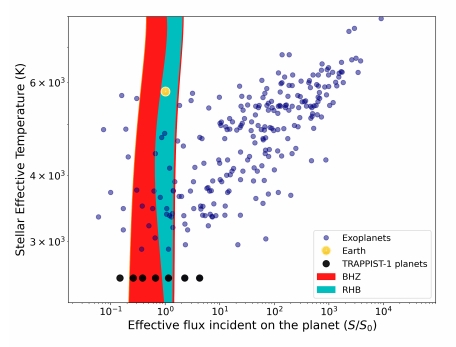 Image: This is Figure 1 from the paper. Caption: As this figure shows, the Earth (lemon) is worryingly close to the outermost edge of the Really Habitable Zone (teal blue region). One might think that this is cause for panic, however, the authors have extensively tested and verified the existence of gins and tonic on Earth. Our vigilance in this matter is (nearly) unceasing. Credit: Pedbost et al.

This compelling work includes an interesting section on observational prospects for detecting gins and tonic on exoplanets (“As with many exoplanet papers, this one includes a section on wildly infeasible future observations which, though difficult, would undoubtedly have enormous scientific impact”). The authors assume 1 bar atmospheric pressure in their calculations, for reasons that should be apparent, and evaluate methodologies for detection of both gin and citrus, assuming tonic is ubiquitous because gin without it is “literally unthinkable.” How true.

The paper is Pedbost et al. (with what I take to be a liberal contribution from the ever reliable Chris Lintott), “Defining the Really Habitable Zone,” available as a preprint. Thanks for the pointer goes to my friend Ashley Baldwin, who knows the value of the occasional jest in dire times.

Next post: WFIRST: Exoplanets in the Direction of Galactic Center