WFIRST: Exoplanets in the Direction of Galactic Center

The Kepler mission gave us, along with plenty of exoplanetary scenarios, a statistical look at a particular patch of sky, one containing parts of Lyra, Cygnus and Draco. Some of the stars within that field were close (Gliese 1245 is just 15 light years out), but the intention was never to home in on nearby systems. Most of the Kepler stars ranged from 600 to 3,000 light years away. Instead, Kepler would produce an overview of planets around different stellar types, including some in the habitable zone of their stars.

As with all such observations, we’re limited by the methods chosen, which in Kepler’s case involved transits of the host star. TESS, the Transiting Exoplanet Survey Satellite, likewise uses the transit method, though with particular reference to broad sky coverage and close, bright stars. We can deploy the widely anticipated James Webb Space Telescope, to be launched next year, to follow up interesting finds, but let’s also consider how useful the Wide Field Infrared Survey Telescope (WFIRST) is going to be, for this instrument brings a new population of planets into the mix.

Not that WFIRST won’t be able to spot transits as well, but the real interest here is microlensing, a phenomenon a good deal less common than transits, but one holding the promise of finding planets far more distant than Kepler. Looking toward the passage of a star and planetary system in front of a background star, astronomers can catch the lensing effect produced by the warping of spacetime. That quick brightening can contain within it the signature of one or more planets.

As you would imagine, finding these occultations is tricky, for they don’t occur very often. David Bennett is head of the gravitational microlensing group at NASA’s Goddard Space Flight Center. Kepler monitored more than 150,000 stars in its primary mission, but WFIRST will have a lot more to play with, says Bennett :

“Microlensing signals from small planets are rare and brief, but they’re stronger than the signals from other methods. Since it’s a one-in-a-million event, the key to WFIRST finding low-mass planets is to search hundreds of millions of stars.” 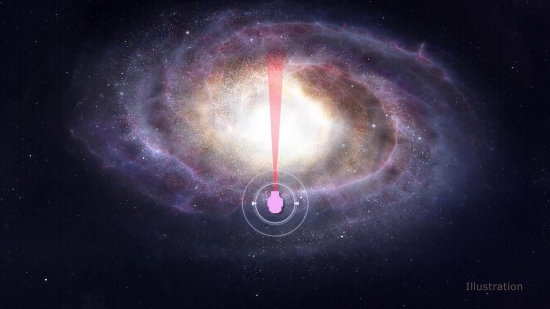 Image: WFIRST will make its microlensing observations in the direction of the center of the Milky Way galaxy. The higher density of stars will yield more exoplanet detections. Credit: NASA’s Goddard Space Flight Center/CI Lab.

Slated for launch in the mid-2020s, WFIRST will round out what we’ve learned from previous missions and different exoplanet detection methods. Radial velocity is sensitive to planets close to the host star and, with ever greater spectroscopic precision, can tease out information about smaller worlds further out. Transits are excellent for finding small worlds in tight orbits. What microlensing brings to the table are planets of all sizes — and perhaps even large moons — orbiting at a wide range of distances from the host, as far out as Uranus and Neptune and potentially much farther.

Here the bias, if we want to call it that, is toward planets from the habitable zone outward, fully complementing our other methods, which function so much better in inner systems. We have no idea how common ice giants are, but WFIRST should help us build the census. We go from Kepler’s 115 square degree field of view of stars typically within 1,000 light years to a 3 square degree field that, because it’s toward galactic center, will track 200 million stars. Their average distance will be in the range of 10,000 light years, far beyond the reach of other methods.

Microlensing has produced its share of planets — 86 so far — but bear in mind that the observations that have turned them up have been in visible light, which means that looking toward the center of the galaxy, shrouded in dust, has not been feasible. That’s beginning to change with the United Kingdom Infrared Telescope (UKIRT), which from its vantage in Hawaii has begun mapping the region. Data from UKIRT will help determine the WFIRST microlensing observation strategy.

“Our current survey with UKIRT is laying the groundwork so that WFIRST can implement the first space-based dedicated microlensing survey. Previous exoplanet missions expanded our knowledge of planetary systems, and WFIRST will move us a giant step closer to truly understanding how planets – particularly those within the habitable zones of their host stars – form and evolve.”

But WFIRST microlensing goes beyond exoplanet discovery to take in everything from black holes to neutron stars, brown dwarfs and ‘rogue’ planets that have been ejected from their planetary systems. TESS is currently tracking 200,000 stars over the entire sky. The infrared studies of WFIRST will dramatically add to what Kepler and TESS have given us, using machine learning tools now being refined by UKIRT to comb through the data. An overview of planetary populations at all distances from the host star, and with a target field containing hundreds of millions of stars, is the much desired result.