Impact in the Outer System

We looked recently at Voyager 2’s flyby of Uranus, via a new paper that examined the craft’s magnetometer data to draw out information about the planet’s magnetic environment. Science fiction author Stanley Weinbaum, author of the highly influential “A Martian Odyssey” in 1935, christened Uranus ‘The Planet of Doubt’ in a short story of the same name. Weinbaum couldn’t have known about the world’s magnetic field axis, which we’ve learned is tilted 60 degrees away from its spin axis. The latter itself is 98 degrees off its orbital plane. Doubtful planet indeed.

Here we have a world that is spinning on its side, one that demands answers as to how it got that way. A giant impact at some point in its history is a natural assumption, but how do we explain the fact that the Uranian moons as well as the planet’s ring system all show the same 98 degree orbital tilt as their parent? Back in 2011, a team led by Alessandro Morbidelli (Observatoire de la Cote d’Azur) ran a variety of simulations to test impact scenarios and discovered that a sufficiently early impact could have reformed the entire protoplanetary disk, leading to its 27 moons being in the position we see today. See the Centauri Dreams post A New Slant on the Planet of Doubt for more on the Morbidelli et al. paper. 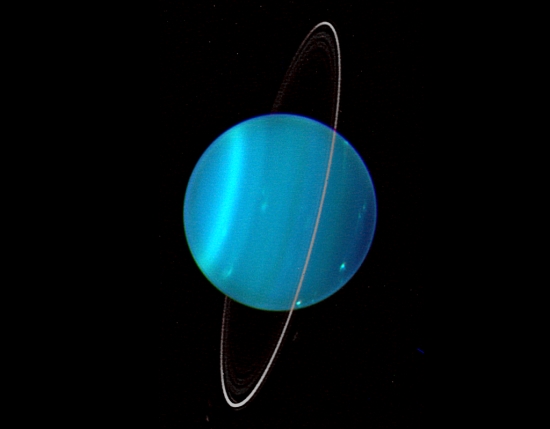 Image: Uranus is uniquely tipped over among the planets in our Solar System. Uranus’ moons and rings are also orientated this way, suggesting they formed during a cataclysmic impact which tipped it over early in its history. Credit: Lawrence Sromovsky, University of Wisconsin-Madison/W.W. Keck Observatory/NASA.

Now we have another look at the problem, this from a team led by Shigeru Ida (Earth-Life Science Institute, Tokyo Institute of Technology). The key to this new paper is the understanding that while impacts would have been more common in the early Solar System than now, the outer planets would have experienced impacts that were different in result than those in the inner system. A rocky Mars-sized object might smack into a rocky Earth to create our Moon, but collisions between two icy objects have different results in the outer Solar System.

Out here, we’re dealing with planets with an abundance of volatiles, elements that would be gases or liquids in the warmer regions of the inner system, but are frozen at large distances from the Sun. The temperature needed to vaporize water ice is low, and the team assumes, reasonably, that both Uranus and its impactor were dominated by ices. Thus an impact early in the formation history of Uranus would have vaporized this ice, with leftover materials remaining gaseous and becoming incorporated primarily into the forming planet. Ida’s computer modeling shows that such impacts produce not one or two large moons but a number of small ones.

The inclination of both ring and moon system at Uranus makes it clear that the impact was early and formative for the entire Uranian system. Bear in mind that the ratio of the planet’s mass to its moons is larger than the ratio of Earth’s mass to its Moon by a factor of more than one hundred. Working with substantial water vapor mass loss, the researchers’ simulation reproduces the observed mass-orbit configuration of the Uranian satellites by incorporating the predicted distribution of ices as they re-condense. The results parallel the system we see today, indicating it is the result of the evolution of this volatile-laden impact-generated disk.

The authors contrast this with the giant impact model for Earth’s Moon, arguing that about half of the solid or liquid disk created by the strike was integrated into the Moon. The difference is the high condensation temperature at Earth’s orbital distances, meaning that the rocky and liquid material of the Earth-Moon impact would have solidified quickly, allowing the Moon to collect a significant amount of the debris created by the collision due to its gravity shortly after impact.

The work may have applications in other stellar systems. From the paper:

We have shown that the current Uranian major satellites are beautifully reproduced by the derived analytical formulas based on viscous spreading and cooling of the disk generated by an impact that is constrained by the spin period and the tilted spin, independent of details of the initial disk parameters. Although we have focused on Uranus, the model here provides a general scenario for satellite formation around ice giants with the scaling by the mass and the physical radius of a central planet, which is totally different from satellite formation scenarios around terrestrial planets and gas giants. It could also be applied for the inner region of Neptune’s satellite system, where we can neglect the effect of Triton that may have been captured. Observations suggest that many of [the] discovered super-Earths in exoplanetary systems may consist of abundant water ice, even in close-in (warm) orbits. The model here may also give a lot of insights into possible icy satellites of super-Earths.

Next post: Cassini: How Saturn Heats Its Upper Atmosphere