Given their distance from the Sun, the gas and ice giants of our Solar System should not have upper atmospheres as hot as they are. Clearly, something is happening at the planets themselves to account for the warmth, and new analysis of Cassini data, just published in Nature Astronomy, lays out the case for auroral activity at the north and south poles of Saturn as the explanation there. The paper offers the results of the most complete mapping yet made of the temperature and density of a gas giant planet’s upper atmosphere.

Tommi Koskinen, a co-author on the paper describing these findings is a member of Cassini’s Ultraviolet Imaging Spectrograph (UVIS) team:

“The results are vital to our general understanding of planetary upper atmospheres and are an important part of Cassini’s legacy. They help address the question of why the uppermost part of the atmosphere is so hot while the rest of the atmosphere – due to the large distance from the Sun – is cold.” 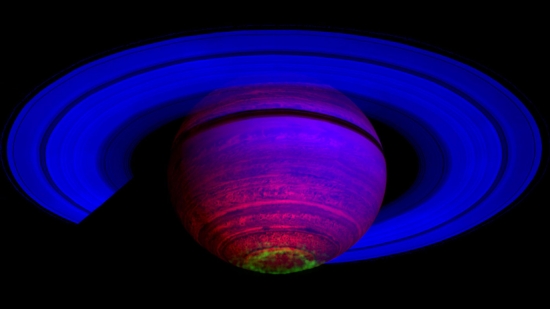 Image: This false-color composite image, constructed from data obtained by NASA’s Cassini spacecraft, shows the glow of auroras streaking out about 1,000 kilometers (600 miles) from the cloud tops of Saturn’s south polar region. It is among the first images released from a study that identifies images showing auroral emissions out of the entire catalogue of images taken by Cassini’s visual and infrared mapping spectrometer. Credit: NASA/JPL/ASI/University of Arizona/University of Leicester.

The process at Saturn is much the same as what drives Earth’s auroral activity. Plasma from the solar wind moves along magnetic field lines in the upper atmosphere, where electrons collide with atmospheric atoms and molecules, exciting them to higher energy levels that radiate light at various colors and wavelengths. The differences in atmospheric composition mean that at Saturn, the light we see comes from emissions of molecular and atomic hydrogen.

Like Voyager, the trove of Cassini data keeps churning up new insights. In this case, we’re dealing with data collected during the spacecraft’s Grand Finale, the 22 breathtakingly tight orbits made before the craft was flown into Saturn’s atmosphere to protect potentially life-bearing moons like Enceladus. Cassini had already orbited Saturn for more than 13 years and was at the end of its fuel supply, but those final orbits were exceedingly productive.

Targeting bright stars in the constellations of Orion and Canis Major, Cassini spent six weeks observing the stars rising and setting behind the planet, allowing scientists to measure the changes in starlight passing through the atmosphere. The temperature map used in the new paper relies on density measurements that provided the information needed to calculate atmospheric temperatures. Temperatures were found to peak near the auroras, giving credence to the idea that auroral electric currents are the heat source for the upper atmosphere. 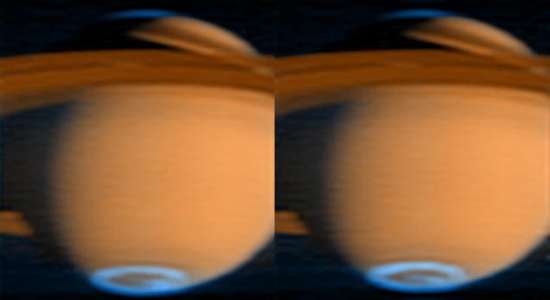 Image; The aurora at Saturn’s southern pole is visible in these false-color images, gathered by Cassini’s ultraviolet imaging spectrograph (UVIS) on June 21, 2005. Blue represents aurora emissions from hydrogen gas excited by electron bombardment, while red-orange represents reflected sunlight. The images show that the aurora lights at the polar regions respond rapidly to changes in the solar wind. Previous images have been taken closer to the equator, making it difficult to see the polar regions. Changes in the emissions inside the Saturn south-pole aurora are visible by comparing the two images, taken about one hour apart. The brightest spot in the left aurora fades, and a bright spot appears in the middle of the aurora in the second image. Credit: NASA/JPL/University of Colorado.

The rate of density decrease in the atmosphere depends on temperature, and the combination of temperature and density measurements helped the researchers determine the speed of the winds at altitude. Thus we get a glimpse of the zone where space weather interacts directly with a planet, showing how a global wind system distributes energy that is initially accumulated near the poles and then flows on into the equatorial regions. We wind up with the observed temperatures at altitude that are twice what we would expect from solar heating alone.