The brown dwarf 2MASS J10475385+2124234 is about the size of Jupiter, but maybe 40 times more massive. 33.2 light years from Earth, this object is in that category between planet and star, not massive enough to launch the same kind of nuclear reactions that power the Sun, but considerably more massive than any planet. Combining two tools — the Very Large Array (VLA) and NASA’s Spitzer Space Telescope — scientists have now measured the wind speed here.

Katelyn Allers (Bucknell University), who led the research team, realized that the combination of radio observations (VLA) and infrared (Spitzer) would make this kind of measurement possible, and expressed surprise that no one else had thought to do it before. After all, we already knew that the rotation period of Jupiter found through radio measurements differs from the period found at visible and infrared wavelengths. That disparity is key to the new measurement.

For the difference is the result of two separate phenomena. Radio emissions from Jupiter are caused by electrons interacting with the planet’s huge magnetic field, located deep in the interior. The infrared emission is measured at the top of the atmosphere. Because the atmosphere is rotating more quickly than the interior, we have a difference in velocity due to atmospheric winds. The same kind of measurement is now put to use at a brown dwarf.

“Since the magnetic field originates deep in the planet, or in this case brown dwarf, the radio data allows us to determine the interior period of rotation,” Allers says. “When you have an interior rotation rate and an atmospheric rotation rate, you can compare them to see how fast the wind is blowing.” 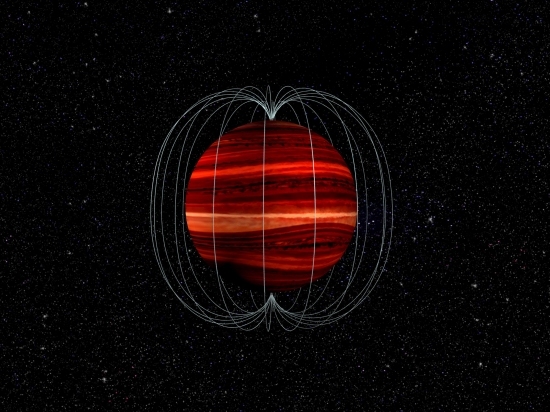 Image: Artist’s conception of a brown dwarf and its magnetic field. The magnetic field, rooted deep in its interior, rotates at a different rate than the top of the atmosphere. The difference allowed astronomers to determine the object’s wind speed. Credit: Bill Saxton, NRAO/AUI/NSF.

Allers and company observed 2MASS J10475385+2124234 with Spitzer in 2017 and 2018, noting the interesting fact that its infrared brightness varies regularly, indicating a long-lived feature of some sort in the upper atmosphere. Does this brown dwarf have something analogous to Jupiter’s Great Red Spot? That we can’t know at this point, but a set of VLA observations from 2018 measured the rotation period of the brown dwarf’s interior, so we do know about the winds.

This initial measurement may alert us to a technique that can measure winds not only on other brown dwarfs but on some giant exoplanets, although as co-author Peter K.G. Williams notes, the magnetic fields of such worlds are weaker than those of brown dwarfs, so the radio measurements would be conducted at lower frequencies than those used in the 2MASS J10475385+2124234 work. Williams (Center for Astrophysics | Harvard & Smithsonian) led the radio astronomical observations at the VLA.

“For the first time ever, we measured the speed of the winds of a brown dwarf — too big to be a planet, too small to be a star,” Williams adds. “The results rule out a few unusual models and prove that this new technique works and can be applied to more objects… This new technique opens the way to better understanding the behavior of atmospheres that are unlike anything found in our solar system.” 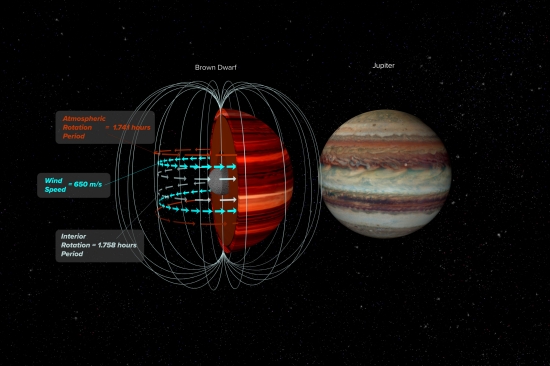