A Formation Scenario for ‘Oumuamua

The interstellar object we call ‘Oumuamua was bound to be fascinating no matter what it actually was. You discover the first incoming object from interstellar space only once. But this one had its own share of peculiarities. Here was what was assumed to be a comet, but one that showed no outgassing as it reached perihelion and in fact seemed to be unusually dry. Here was an object of an apparently elongated shape, an aspect ratio with which we had nothing to compare in our own system. A tiny but detectable acceleration on the way out of the system seemed to indicate later outgassing, but how was that consistent with earlier data?

I think Harvard’s Avi Loeb was exactly right to point out that among the possible explanations of new objects, we can’t disregard the possibility of a technology from another civilization. That ‘Oumuamua was a natural object is an obvious default position, but we are at a stage in our understanding of the cosmos when we realize that the conditions for life occur elsewhere. We don’t know how often it forms — abiogenesis may be spectacularly rare. But maybe not.

But while we’ll never know with 100 percent certainty what ‘Oumuamua was, we can look forward to many more interstellar objects to evaluate as new instrumentation comes online. Meanwhile, that apparently elongated shape that so distinguished ‘Oumuamua has come under scrutiny from Yun Zhang (National Astronomical Observatories of the Chinese Academy of Sciences) and Douglas N. C. Lin (UC-Santa Cruz), who have run computer simulations that show how it could have formed and go on to explain its other oddball quirks.

“We showed that ‘Oumuamua-like interstellar objects can be produced through extensive tidal fragmentation during close encounters of their parent bodies with their host stars, and then ejected into interstellar space,” says Lin. “Our objective is to come up with a comprehensive scenario, based on well understood physical principles, to piece together all the tantalizing clues.” 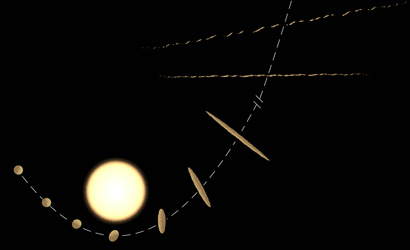 Image: This illustration shows the tidal disruption process that can give rise to ‘Oumuamua-like objects. Credit: NAOC/Y. Zhang.

Tidal forces are the key to this work, which is described in a paper in Nature Astronomy. Think Shoemaker-Levy 9, whose spectacular disintegration produced the famous ‘chain of pearls’ as the comet was progressively torn apart by Jupiter’s gravity. In Zhang and Lin’s simulations, the modeling of the structural dynamics of an object passing close to its star produces extremely elongated fragments that are then ejected into deep space. The work shows that aspect ratios even greater than 10 to 1 are not out of the question.

Could such a shape be stable? Evidently so, for the scientists used thermal modeling to show that at tight stellar distances, the surface of such an object would melt and then recondense on its way out of the system, producing a crust that should remain cohesive. We get a ‘shard’ of material being flung into the cosmos in a random direction. Moreover, this is a process that contains within it other unusual aspects of the ‘Oumuamua encounter with our system.

“Heat diffusion during the stellar tidal disruption process also consumes large amounts of volatiles, which not only explains ‘Oumuamua’s surface colors and the absence of visible coma, but also elucidates the inferred dryness of the interstellar population,” Zhang said. “Nevertheless, some high-sublimation-temperature volatiles buried under the surface, like water ice, can remain in a condensed form.”

So we circle back to the fact that ‘Oumuamua showed no cometary activity but an apparent outgassing sufficient to produce a non-gravitational motion, albeit a tiny one. Under the modeling Zhang and Lin performed, the warmth of the approach to perihelion would have activated residual water stores that match the observed trajectory of ‘Oumuamua. 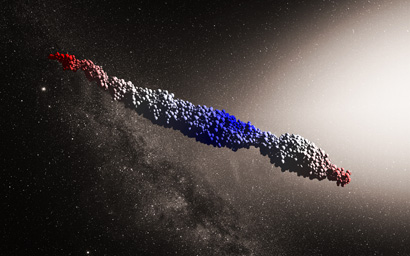 We should expect quite a few more interstellar objects in our future. Zhang and Lin believe that on average, a single planetary system should eject a total of about a hundred trillion objects like ‘Oumuamua. The tidal forces in play in these simulations work for any number of source objects, from super-Earths to long-period comets and other material from a debris disk. In other words, there is hardly a shortage of material out of which to form interstellar objects. Doubtless our Sun has spewed its share into nearby interstellar space, shard-like or not.

We’ve had a second interstellar object since ‘Oumuamua, the much more comet-like 2I/Borisov. Whether Zhang and Lin are right in their assessment may eventually become clear as we detect and study further examples. Given their apparent plenitude, we should by virtue of these simulations assume that some, if not many, will share some of the traits of ‘Oumuamua. Eventually we’ll build a catalog that may teach us something about planetary evolution.