What intrigues me about Kepler-1649c, a newly discovered planet thrust suddenly into the news, isn’t the fact that it’s potentially in its star’s habitable zone, nor that it is close to being Earth-sized (1.06 times Earth’s radius). Instead, I’m interested in the way it was found. For this is a world turned up in exhaustive analysis of data from the original Kepler mission. Bear in mind that data from the original Kepler field ceased being gathered a full seven years ago.

I share Jeff Coughlin’s enthusiasm on the matter. Coughlin is an astronomer affiliated with the SETI Institute who is a co-author on the new paper, which appears in Astrophysical Journal Letters. One of the goals of the mission that began as Kepler and continued (on different star fields) as K2 was to find the fraction of stars in the galaxy that have planets in the habitable zone, using transit methods for initial detection and radial velocity follow-up on Earth. Of the new find, made with an international team of scientists, Coughlin says:

“It’s incredible to me that we just found [Kepler-1649c] now, seven years after data collection stopped on the original Kepler field. I can’t wait to see what else might be found in the rich dataset from Kepler over the next seven years, or even seventy.”

Yes, because we’re hardly through with a dataset that has taken in close to 200,000 stars. What the new planet reminds us is that the initial detection stage of Kepler’s work long ago ceded to analysis of how many of the acquired signals are due to systematic effects in the instrumentation, or variable stars, or perhaps binaries, for so many things can appear to be the signature of a planet when they are not. Making computer algorithms to automate this work has occurred only after intensive human study to learn the best ways to distinguish between signals.

But consider: The algorithm, called Robovetter, that was used to distinguish false positives was working on data in which only 12 percent of the transit signals turned out to be planets. We have false positives galore, out of which we now get the Kepler False Positive Working Group to serve as a double-check on the algorithm’s work. The KFPWG is a dedicated team indeed, taking years to review the thousands of signals from the original Kepler dataset. Kepler-1649c comes out of this review, a world that had been misclassified by the automated methods earlier on. Clearly, humans and machines learn from each other as they make such difficult calls. 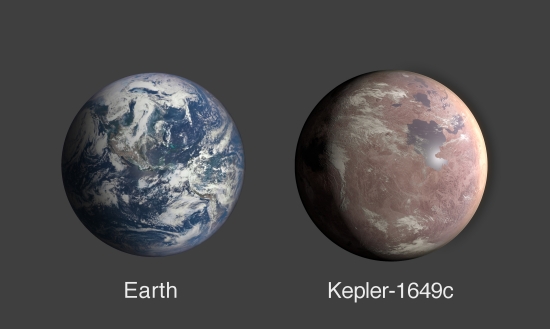 I yield to the experts when it comes to habitability, and trust our friend Andrew LePage will weigh in soon with his own analysis. What we do know is that this planet receives about 75 percent of the amount of light Earth receives from the Sun, though in this case the star in question is a red dwarf of spectral type M5V, the same as Proxima Centauri, fully 300 light years out. As always with red dwarfs, we bear in mind that stellar flares are not uncommon. The planet orbits its star every 19.5 days. We have no information about its atmosphere.

Even so, lead author Andrew Vanderburg (University of Texas at Austin) notes the potential for habitability:

“The more data we get, the more signs we see pointing to the notion that potentially habitable and Earth-sized exoplanets are common around these kinds of stars. With red dwarf stars almost everywhere around our galaxy, and these small, potentially habitable and rocky planets around them too, the chance one of them isn’t too different than our Earth looks a bit brighter.”

There is a planet on an orbit interior to Kepler-1649c, a super-Earth standing in relation to the former much as Venus does to the Earth. The two demonstrate an uncommon nine-to-four orbital resonance, one that hints at the possibility of a third planet between them. This would give us a pair of three-to-two resonances, a much more common scenario, though no trace of the putative world shows up in the data. If there, it is likely not a transiting planet.

I rather like the image that comes out of NASA Ames, where the Kepler effort is managed, but I like it as a kind of science fictional art, the sort of thing to be found on SF paperbacks. It’s evocative and suggestive, but of course we have no idea what this world really looks like. 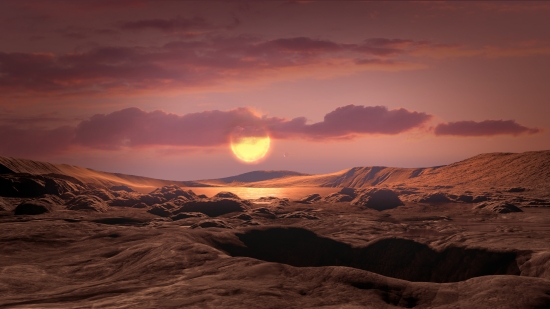 Image: An illustration of what Kepler-1649c could look like from its surface. Credit: NASA/Ames Research Center/Daniel Rutter.