Back in January — and boy does that seem like another era — I wrote about the plan to look at two nearby stars with the help of the New Horizons spacecraft as well as observations from the general public. If you’d like to get involved, there is still time, but the date is fast approaching. Amateur equipment and digital cameras have reached the point where astronomy at a very high level can be conducted from small observatories and even back yards. Here’s another chance to make the case for the value of such work.

Tha planned observations take advantage of parallax, the apparent shift in position of nearby stars as measured using the radius of the Earth’s orbit. Friedrich Bessel’s groundbreaking work on stellar distances involved taking such measurements to calculate the distance of 61 Cygni, all this back in 1838. The apparent shift of the star against background stars allowed him to peg 61 Cygni’s distance at 10 light years, reasonably close to the modern figure of 11.4.

New Horizons gives us a baseline extending all the way to the Kuiper Belt. By the time we take the upcoming observations of Proxima Centauri and Wolf 359, the spacecraft will be 46 times farther from the Sun than Earth (some 8 billion kilometers out). Combining the New Horizons data with Earth-based images made on April 22 and 23 will yield a record-setting parallax measurement as the two stars seem to shift in position against the background.

“These exciting 3D images, which we’ll release in May, will be as if you had eyes as wide as the solar system and could detect the distance of these stars yourself,” said New Horizons Principal Investigator Alan Stern, of the Southwest Research Institute, Boulder, Colorado. “It’ll be a truly vivid demonstration of the immense distance New Horizons has traveled, and a cool way to take advantage of the spacecraft’s unique vantage point out on the very frontier of our solar system!” 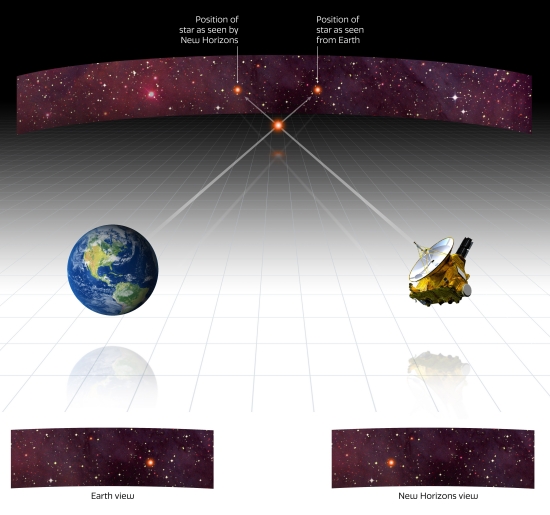 Image: This figure illustrates the phenomenon of stellar parallax. When New Horizons and observers on Earth observe a nearby star at the same time, it appears to be in different places compared to more distant background stars — this is because New Horizons has traveled so far out in space that it has to look in a different direction to see that star. The small images below Earth and New Horizons show each unique view. Note that the farther-away background stars stay in the same place, but the nearby star appears to move between the two vantage points. Credit: Pete Marenfeld, NSF’s National Optical-Infrared Astronomy Research Laboratory.

Those wishing to participate will need a camera equipped telescope with 6-inch aperture or larger. To learn more, click here. Proxima Centauri is 4.244 light years away, a distant companion to the primary Centauri A and B stars. It’s also at quite a large angle in the sky from Wolf 359, making both stars a useful reference as the team explores autonomous interstellar navigation. Robotic missions within the Solar System have used optical imagery for navigation before, but New Horizons takes the technique into interstellar trajectories as it heads out ever deeper into the Kuiper Belt. Thus New Horizons science team member Tod Lauer:

“For all of history, the fixed stars in the night sky have served as navigation markers. As we voyage out of the solar system and into interstellar space, how the nearer stars shift can serve as a new way to navigate. We will see this for the first time with New Horizons.” 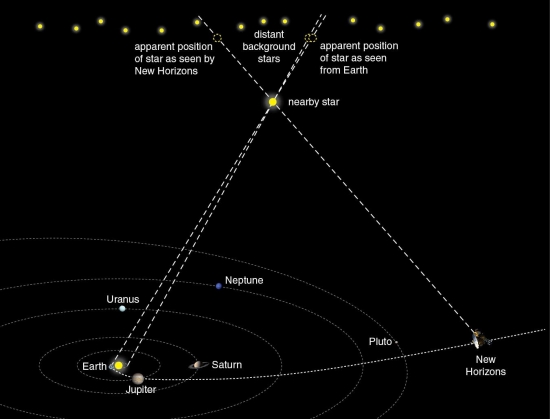 Image: This figure, by New Horizons contributing scientist Brian May, shows the parallax as an effect of New Horizons’ travels deeper into the Kuiper Belt. Traditionally, parallax is measured as the Earth orbits around the sun. The two lines at left show the lines of sight from Earth to the star on either side of Earth’s orbit. This causes a small shift in the position of the nearby star compared to more distant stars. New Horizons is so far away that a much larger shift in the line of sight to the star occurs. Credit: Brian May.

As for Wolf 359, it’s a red dwarf 7.9 light years away in Leo. You may recall numerous science fiction references to the star, ranging from “Wolf 359”, an episode on the 60’s TV show The Outer Limits to Harry Harrison’s Captive Universe (1969), a generation ship novel, and a double episode of Star Trek: The Next Generation. More recently, there is the Hugo nominated Ken MacLeod short story “Who’s Afraid of Wolf 359?”

While Proxima Centauri is not visible for most northern hemisphere observers, Wolf 359 should be observable from both hemispheres with telescopes of sufficient aperture. Star charts of the Wolf 359 and Proxima Centauri fields are available at the project site.

Next post: A Look into the Origins of Interstellar Comet 2I/Borisov