A Look into the Origins of Interstellar Comet 2I/Borisov

We’re learning interesting things about 2I/Borisov, the first interstellar comet discovered entering our Solar System (‘Oumuamua may have been a comet as well, but the lack of an active gas and dust coma makes it hard to say for sure). Moving at 33 kilometers per second, 2I/Borisov is on a trajectory clearly indicating an interstellar origin. Now two different studies have shown that in terms of composition, the visiting object is unlike most of the comets found in our own system.

Both the Hubble Space Telescope and the Atacama Large Millimeter/submillimeter Array (ALMA) have found levels of carbon monoxide (CO) higher than expected, a concentration greater than any comet yet detected within 2 AU of the Sun (about 300 million kilometers). The ALMA team finds the CO concentration to be somewhere between 9 and 26 times higher than inner system comets, while Hubble sees levels at least 50 percent more abundant than the average of comets in the inner system. Dennis Bodewits (Auburn University) is lead author of the paper on the Hubble work, which appears in Nature Astronomy:

“The amount of carbon monoxide did not drop as expected as the comet receded from the Sun. This means that we are seeing the primitive layers of the comet, which really reflect what this object is made of. Because of the abundance of carbon monoxide ice that survived so close to the Sun, we think that comet Borisov comes from a much colder place and from a very different debris disk around a star than our own.”

Image: Comet 2I/Borisov, captured here in two separate images from NASA’s Hubble Space Telescope, including one with a background galaxy (left), is the second interstellar object known to enter our Solar System. New analysis of Borisov’s bright, gas-rich coma indicates the comet is much richer in carbon monoxide gas than water vapor, a characteristic very unlike comets from our Solar System. Credit: NASA, ESA and D. Jewitt (UCLA).

2I/Borisov isn’t completely off the charts — there is one Oort Cloud comet, the recently discovered C/2016 R2 (PanStarrs), that showed even higher CO levels than Borisov when it reached a distance of 2.8 AU from the Sun. But the Borisov results are intriguing and give us a preliminary benchmark against which to measure interstellar objects discovered in the future. The Hubble work was performed using the instrument’s Cosmic Origins Spectrograph, sensitive to ultraviolet, with data taken in four periods from Dec. 2019 to Jan. 2020. NASA’s Swift satellite was able to confirm Hubble’s readings with measurements taken over the same period.

Carbon monoxide is volatile enough that it begins to sublimate (turn from ice to gas) far out in the Solar System, perhaps as much as three times the distance between Pluto and the Sun. Water, on the other hand, remains an ice until somewhere between Mars and the inner edge of the main asteroid belt, and water is the prevalent signature of comets in the inner system. Adds Bodewits: “Borisov’s large wealth of carbon monoxide implies that it came from a planet formation region that has very different chemical properties than the disk from which our solar system formed.”

In a second study reported in the same issue of Nature Astronomy, scientists using ALMA data collected in the same time frame as Hubble’s (15–16 December 2019) detected both hydrogen cyanide (HCN) and CO in Borisov. The HCN showed up at levels that were not surprising to researchers, but the CO amounts had researchers speculating on the object’s origins. Martin Cordiner, along with Stefanie Milam, led an international team at NASA GSFC:

“Most of the protoplanetary disks observed with ALMA are around younger versions of low-mass stars like the Sun. Many of these disks extend well beyond the region where our own comets are believed to have formed, and contain large amounts of extremely cold gas and dust. It is possible that 2I/Borisov came from one of these larger disks… This is the first time we’ve ever looked inside a comet from outside our solar system, and it is dramatically different from most other comets we’ve seen before.” 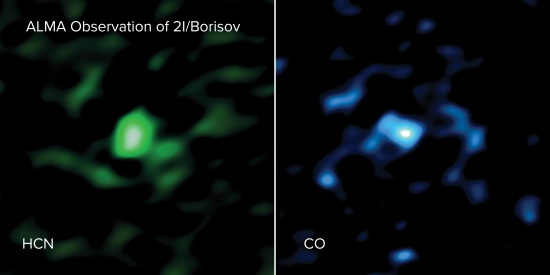 Image: ALMA observed hydrogen cyanide gas (HCN, left) and carbon monoxide gas (CO, right) coming out of interstellar comet 2I/Borisov. The ALMA images show that the comet contains an unusually large amount of CO gas. ALMA is the first telescope to measure the gases originating directly from the nucleus of an object that travelled to us from another planetary system. Credit: ALMA (ESO/NAOJ/NRAO), M. Cordiner & S. Milam; NRAO/AUI/NSF, S. Dagnello.

The Hubble team considers a carbon-rich circumstellar disk around a cool red dwarf as one possibility for 2I/Borisov’s birthplace. Here, gravitational interactions with a planet orbiting in the outer reaches of the system could have ejected the comet. “These stars have exactly the low temperatures and luminosities where a comet could form with the type of composition found in comet Borisov,” says John Noonan (Lunar and Planetary Laboratory, University of Arizona, Tucson).

This is interesting speculation, but the real news here is that this is the first measurement of the carbon monoxide composition of a comet from another star. The work points to the entirely new area of exoplanetology that is opening up, the study of debris from other stellar systems that will be further enabled as new telescopes and survey methods come online. Future objects should help us clarify how to use such data as we explore planet formation around other stars.