It will surprise few Centauri Dreams readers that at least some brown dwarfs have bands of clouds, just as we see similar bands on our Solar System’s largest planet. In fact, three brown dwarfs have recently shown signs of cloud banding, and today’s subject, Luhman 16, has previously been analyzed in terms of large cloud patches. I think new work based on data from the European Southern Observatory’s Very Large Telescope (VLT) in Chile may be less significant for what it says about brown dwarfs than what it says about how we study them. 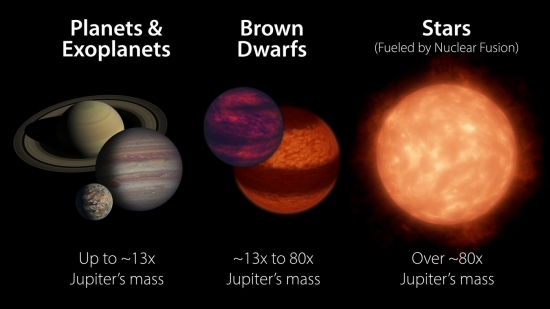 For the work in question, reported in a paper from Maxwell Millar-Blanchaer (Caltech) and colleagues, is the first time polarimetry has been put to work to infer bands in brown dwarf clouds. Polarization tells us the direction that a light wave oscillates. Millar-Blanchaer likens polarimetric instruments to polarized sunglasses — here, one direction of polarization is blocked to reduce glare — but adds that astronomers are less concerned with reducing glare than measuring it. Light reflecting off cloud droplets can favor a measurable angle of polarization.

We’re beginning to see methods to analyze polarized light cropping up more and more in astronomy, with implications for exoplanets. Thus Dimitri Mawet (Caltech), a senior research scientist at the Jet Propulsion Laboratory:

“Polarimetry is receiving renewed attention in astronomy. Polarimetry is a very difficult art, but new techniques and data analysis methods make it more precise and sensitive than ever before, enabling groundbreaking studies on everything from distant supermassive black holes, newborn and dying stars, brown dwarfs, and exoplanets, all the way down to objects in our own solar system.” 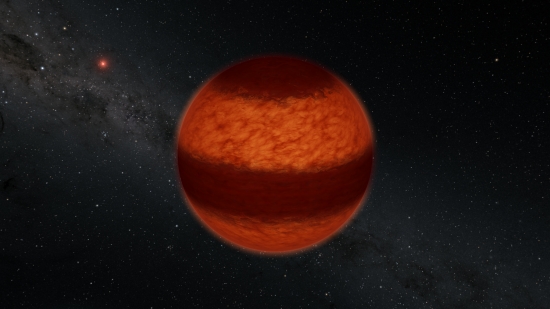 Image: Astronomers have found evidence for a striped pattern of clouds on the brown dwarf called Luhman 16A, as illustrated here in this artist’s concept. The bands of clouds were inferred using a technique called polarimetry, in which polarized light is measured from an astrophysical object much like polarized sunglasses are used to block out glare. This is the first time that polarimetry has been used to measure cloud patterns on a brown dwarf. The red object in the background is Luhman 16B, the partner brown dwarf to Luhman 16A. Together, this pair is the closest brown dwarf system to Earth at 6.5 light-years away. Credit: Caltech/R. Hurt (IPAC).

Luhman 16 draws attention for being the closest known brown dwarf binary, approximately 6.5 light years away. Both brown dwarfs weigh in at roughly 30 times Jupiter’s mass, examples of ‘failed stars’ that formed from collapsing clouds of gas but lacked the mass to ignite hydrogen fusion. Millar-Blanchaer and team used the VLT’s NaCo instrument (Nasmyth Adaptive Optics System, coupled with the Near-Infrared Imager and Spectrograph called CONICA) to study the polarized light from both of the Luhman brown dwarfs. Luhman 16A’s polarization can only be explained by bands of clouds, while the data on bands are inconclusive for Luhman 16B. The latter’s variability in brightness seems to be the result of irregular, patchy clouds instead.

Consider what we’re doing here. It took NASA’s Wide-field Infrared Survey Explorer (WISE) to find Luhman 16 in 2013, and Millar-Blanchaer’s team now detects clouds through polarization that cannot be directly resolved. The scientists used atmospheric modeling run against measurements of the polarized light to infer the presence of the cloud bands on Luhman 16A.

“To determine what the light encountered on its way we compared observations against models with different properties: brown dwarf atmospheres with solid cloud decks, striped cloud bands, and even brown dwarfs that are oblate due to their fast rotation. We found that only models of atmospheres with cloud bands could match our observations of Luhman 16A,” says Theodora Karalidi (University of Central Florida), a member of the discovery team.

The beauty of using polarimetry this way is that it is sensitive to cloud properties, a trait that should serve us well not only with brown dwarf atmospheres but those of exoplanets. A follow-up study is on the way that will examine later observations looking for short- and long-term variability in the polarization. Meanwhile, the current work confirms the existence of banded clouds near the L/T transition in brown dwarfs, an evolution in spectral type that ultimately results in relatively cloud-free regions across the brown dwarf disks. The previously studied cloud bands have all been in similar L/T transition dwarfs. From the paper:

We have demonstrated that polarimetry provides a promising avenue to answer this question; variability occurrence rates and amplitudes decline outside of the L/T transition, and therefore many targets are unsuitable to cloud mapping via variability monitoring. High-accuracy targeted polarimetric studies sensitive to cloud bands similar to those found in this study may therefore be critical to furthering our understanding of the cloud dynamics in substellar objects. The characterization presented herein relies heavily on previous characterization of Luhman 16. Similar polarimetric studies should be pursued for other brown dwarfs with comparable levels of characterization (e.g., brown dwarfs with well-constrained masses and/or inclinations).

So we have a path forward in studying brown dwarf atmospheres and, potentially, the atmospheres of giant exoplanets. Follow-up work on Luhman 16’s two brown dwarfs is complicated by the fact that the NaCo instrument package has just been decommissioned , but other near-infrared polarimeters are out there, and we should anticipate new atmospheric studies growing out of the data they collect. Bear in mind that the WFIRST mission will be able to conduct polarimetry, which may be its first application using reflected light to study giant exoplanet atmospheres.

The paper is Millar-Blanchaer et al., “Detection of Polarization due to Cloud Bands in the Nearby Luhman 16 Brown Dwarf Binary,” Astrophysical Journal Vol. 894, No. 1 (5 May 2020). Abstract.