More Evidence for Plumes on Europa

Were deviations in Jupiter’s magnetic field, recorded by Galileo’s magnetometer during a flyby of Europa in 2000, an indication of a cryovolcanic eruption? The data on this event have been evaluated by several independent groups in Europe and the US, an indication of how much interest such a plume would generate. If, like Enceladus, Europa occasionally blows off material from below the surface, we would have the possibility of collecting water from its ocean without having to drill through kilometers of ice.

Now a team of European Space Agency scientists led by Hans Huybrighs, working with colleagues at the Max Planck Institute for Solar System Research (MPS), has gone to work on the question, this time through the measurements made by Galileo’s Energetic Particles Detector (EPD), an instrument with roots both at MPS and the Applied Physics Laboratory of Johns Hopkins University (APL). EPD recorded significantly fewer fast-moving protons near Europa than expected during the same flyby. This adds weight to the conclusions of those finding evidence for a plume in the magnetometer data.

Jupiter’s magnetic field is twenty times stronger than Earth’s, extending far enough into space that Europa orbits within it. What Huybrighs and company set out to do was to simulate conditions during the flyby, modeling high-energy proton movements that correspond with what the EPD recorded.

The question raised by the EPD instrument is why these energetic protons were disappearing during the E26 flyby, an observation earlier considered to be caused by Europa itself obscuring the detector, making the measurement unreliable. But the paper makes the case that some of the proton depletion could only be explained by a plume of water vapor that disrupted Europa’s tenuous atmosphere and perturbed magnetic fields in the region. Indeed, the simulations are only successful under the assumption of a plume, whose effects are added into those caused by the atmosphere. Evidence for a plume noted by earlier researchers is thus strengthened by an analysis drawn from an independent dataset. 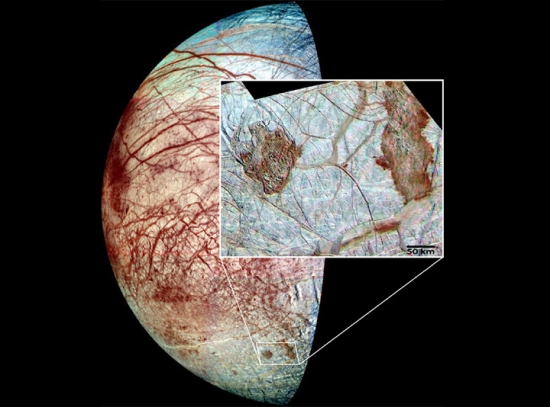 The authors’ conclusion also highlights how much we do not know about the environment at Europa, while pointing to a helpful tool for planning purposes on future missions:

Large uncertainties remain in the properties (density profile, 3D structure, temporal variability…) of Europa’s tenuous atmosphere and plumes (Plainaki et al., 2018). This study emphasizes that energetic ions are an important tool that can contribute to the detection and characterization of Europa’s tenuous atmosphere and plumes and probe its moon-magnetosphere interaction, independently of other methods. This is in particular relevant for the upcoming JUICE mission (Grasset et al., 2013), which has the instrumentation to detect both energetic ions and ENAs, using the Particle Environment Package (PEP)…

The ability of JUICE to detect energetic charged and neutral particles near Europa will help us spot future plumes. Note this ESA description of the Particle Environment Package:

A plasma package with sensors to characterise the plasma environment in the Jovian system.

PEP will measure density and fluxes of positive and negative ions, electrons, exospheric neutral gas, thermal plasma and energetic neutral atoms in the energy range from <0.001 eV to >1 MeV with full angular coverage. The composition of the moons’ exospheres will be measured with a resolving power of more than 1000.

For more on the science payload of this mission, with 10 instruments onboard, click here. JUICE launches in 2022 in a mission aimed at Europa, Callisto and eventual orbit at Ganymede.

Previous post: Ryugu: An Asteroid’s Interactions with the Sun