You would think that the orbits of planets would align closely with the spin of their star, since they emerged from the same primordial disk. Many planets do just that, and in our own system, the orbits of the planets are aligned within 6 degrees of the Sun’s rotation. But the numerous cases of star-planet orbital misalignment around other stars cause us to question whether these systems formed out of alignment or were influenced by later perturbations. A massive companion in a wide orbit could do the trick, and other mechanisms to tilt the orbital or spin axes are discussed in the literature.

To examine the question, the Rossiter-McLaughlin effect comes into play. Discovered by studying binary stars, the effect is named after the two University of Michigan graduate students who figured it out back in the 1920s. They realized that as a star rotates, part of it seems to be coming toward the observer, creating a blueshift, while the other side seems to be moving away, producing a redshift. As a transiting planet blocks part of the background stellar disk, it creates an observable effect in the redshift that flags the direction of the planet’s rotation.

Thus we tease out yet further information about planets we cannot directly see. Now a team of astronomers using the Subaru Telescope has been able to deploy the Rossiter-McLaughlin effect to measure the obliquity, or spin-orbit angle, of three of the planets in the intriguing TRAPPIST-1 system. Here we have an M-dwarf orbited by seven small planets, evidently rocky, with three in or near the habitable zone as defined by the possibility of liquid water on the surface.

What we learn is that the three transiting planets the team observed on August 31, 2018 (two of them near the habitable zone) have an obliquity that is near zero. This marks the first time that stellar obliquity has been measured in a system around a very low-mass star like TRAPPIST-1. Led by Teruyuki Hirano (Tokyo Institute of Technology), the astronomers used the InfraRed Doppler (IRD) spectrograph, a new instrument on the Subaru Telescope, to make the measurement. Says Hirano:

“The data suggest alignment of the stellar spin with the planetary orbital axes, but the precision of the measurements was not good enough to completely rule out a small spin-orbit misalignment. Nonetheless, this is the first detection of the effect with Earth-like planets and more work will better characterize this remarkable exoplanet system.” 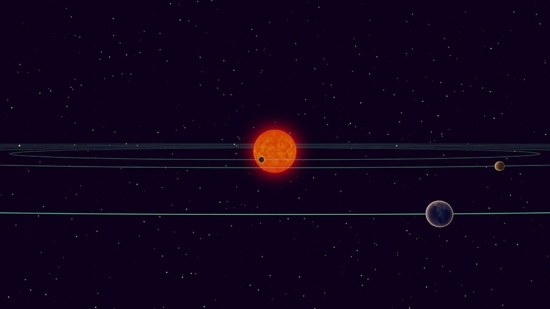 Learning about spin-orbit misalignment (or the lack of same) is useful as we try to understand how planets around low mass stars evolve. The lack of larger worlds around this star, or the presence of a nearby star, means that the planetary orbits here are probably located close to where the planets first formed, so the orbits offer a window into the early days of the system. Rossiter-McLaughlin analyses have hitherto been restricted to planets of at least Neptune mass, so we’re pushing into new territory as we take advantage of IRD’s high spectral resolution.

Assuming the orbits of the TRAPPIST-1 system are coplanar, the authors offer their take on the system’s evolution:

Our result supports the idea that the known planets in the TRAPPIST-1 system achieved their compact configuration through convergent migration, and did not experience any substantial misaligning torques from processes such as planet–planet scatterings or long-term gravitational perturbations from a massive outer companion on an inclined orbit. It is unlikely that any primordial obliquity has been erased by tidal realignment between the star and these low-mass planets.

And on that assumption of a coplanar system, the authors add that they were unable to test it by measuring the mutual inclinations between the planets:

The mutual inclinations might be measurable in the future using repeated observations of Doppler transits to give a higher S/N. The mutual inclination between two planetary orbits might also be measured by observing the photometric effect of a planet–planet eclipse during a double transit event (Hirano et al. 2012). This would be another important clue to understand the architecture and dynamical history of the TRAPPIST-1 system.

No equivalent studies have been performed on a star this small, but the window is clearly opening on methods for studying the orbital architectures of such planetary systems.

Next post: The Odds on Intelligent Life in the Universe