I had never considered the possibilities for life on Uranus until I read Geoffrey Landis’ story “Into the Blue Abyss,” which first ran in Asimov’s in 1999, and later became a part of his collection Impact Parameter. Landis’ characters looked past the lifeless upper clouds of the 7th planet to go deep into warm, dark Uranian oceans, his protagonist a submersible pilot and physicist set to explore:

Below the clouds, way below, was an ocean of liquid water. Uranus was the true water-world of the solar system, a sphere of water surrounded by a thick atmosphere. Unlike the other planets, Uranus has a rocky core too small to measure, or perhaps no solid core at all, but only ocean, an ocean that has actually dissolved the silicate core of the planet away, a bottomless ocean of liquid water twenty thousand kilometers deep.

It would be churlish to give away what turns up in this ocean, so I’m going to direct you to the story itself, now available for free in a new anthology edited by Julie Novakova. Strangest of All is stuffed with good science fiction by the likes of David Nordley, Gregory Benford, Geoffrey Landis and Peter Watts. Each story is followed by an essay about the science involved and the implications for astrobiology. 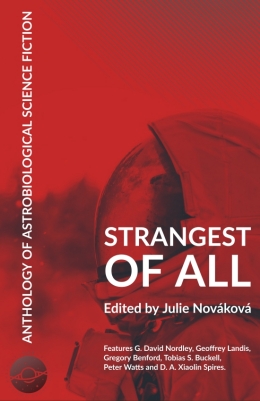 Although I’ve been reading science fiction for decades, our discussions of it in these pages are generally sparse, related to specific scientific investigations. That’s because SF is a world in itself, and one I can cheerfully get lost in. I have to tread carefully to be able to stay on topic. But now and then something comes along that tracks precisely with the subject matter of Centauri Dreams. Strangest of All is such a title, downloadable as a PDF, .mobi or .epub file. I use both a Kindle Oasis and a Kobo Forma for varying reading tasks, and I’ve downloaded the .epub for use on the Forma, but .mobi works just fine for the Kindle.

What we have here is a collaborative volume, developed through the European Astrobiology Institute, containing work by authors we’ve talked about in these pages before because of their tight adherence to physics amidst literary skills beyond the norm. The quote introducing the volume still puts a bit of a chill down my spine:

“…this strangest of all things that ever came to earth from outer space must have fallen while I was sitting there, visible to me had I only looked up as it passed.”

That’s H. G. Wells from The War of the Worlds (1898), still a great read since the first time I tackled it as a teenager. What Novakova wants to do is use science fiction to make astrobiology more accessible, which is why the science commentaries following each story are useful. Strangest of All looks to be a classroom resource for those who teach, part of what the European Astrobiology Institute plans to be a continuing publishing program in outreach and education. We’ve talked before about science fiction’s role as a career starter for budding physicists and engineers.

Gerald Nordley’s “War, Ice, Egg, Universe” takes us to an ocean world with a frozen surface on top, a place like Europa, where the tale has implications for how we approach the exploration of Europa and Enceladus, and perhaps Ganymede as well. In fact, with oceans now defensibly proposed for objects ranging from Titan to Pluto, we are looking at potential venues for astrobiology that defy conventional descriptions of habitable zones as orbital arcs supporting liquid water on the surface. Referring to characters in the story, the EAI essay following Nordley’s tale comments:

Chyba (2000) and Chyba & Phillips (2001) tried to work even with these unknowns and calculate the amount of energy for putative Europan life, and to describe what ecosystems might potentially thrive there. According to these estimates, even a purely surface radiation-driven ecosystem might yield cell counts of over one cell per cubic centimeter; perhaps even a thousand cells per cubic centimeter in the uppermost ocean layers. Putative hydrothermal vents, of course, would create a different source of energy and chemicals for life (albeit one much more difficult to discover – in contrast, life near the icy shell might erupt into space in the geysers and be discovered by “simple” flybys). Any macrofauna, though, seems highly improbable given the energy estimates. Since Loudpincers was about eight times larger than the human Cyndi, by his own account, we’ll really have to look for his civilization elsewhere, perhaps on a larger moon of some warm Jupiter.

You see the method — the follow-up essay explores the ideas, but goes beyond that to provide references for continuing the investigation in the professional literature. This essay also speculates about Ganymede, where a liquid water ocean may be caught between two layers of ice. The ‘club sandwich’ model for Ganymede posits several layers of oceans and ice, which would make Ganymede perhaps the most bizarre ocean-bearing world in the Solar System, one with incredible pressures bearing down on high-pressure ice at the bottom (20 times the pressure of the bottom of the Mariana Trench on Earth).

Gregory Benford’s “Backscatter” is likewise ice-oriented, this time in the remote reaches of the Kuiper Belt and the Oort Cloud beyond. From the essay following the story:

Although it’s difficult to imagine a path from putative simple life in early water-soaked asteroids heated by the radioactive aluminum to vacflowers blooming on the surface of an iceteroid, life in the Kuiper Belt, the Oort Cloud and beyond cannot be ruled out – and we haven’t even touched the issue of rogue planets, which might have vastly varying surface conditions stemming from their size, mass, composition, history and any orbiting bodies.

The essay gives us an overview of the science that, as in Benford’s story, conceives of possible life sustained by sparse inner heat and the presence of ammonia and salts, perhaps with tidal heating thrown in for good measure. Cold brines would demand chemical and energy gradients to sustain life, a difficult thing to discover or measure unless cryovolcano activity coughs up evidence of the ocean below the ice. Some silicon compounds may support a form of life in ice as far out as the Oort, or perhaps in liquid nitrogen. Usefully, the essay on “Backscatter” runs through the scholarship.

The European Astrobology Institute has put together a project team around “Science Fiction as a Tool for Astrobiology Outreach and Education,” out of which has come this initial volume. The references in the science essays make Strangest of All valuable even for those of us who have encountered some of these stories before, for the fiction has lost none of its punch. Thomas Bucknell’s “A Jar of Goodwill” looks at new forms of plant metabolism on a world dominated by chlorine and a key question in addressing alien life: Will we know intelligence when we see it? Peter Watts’ “The Island” looks at Dyson spheres in an astrobiologically relevant form that Dyson himself never thought of (well, he probably did — I bet it’s somewhere in his notebooks).

All told, there are eight stories here along with the essays that explore their implications, an easy volume to recommend given the EAI’s willingness to make the volume available at no cost to readers. See what you think about the Fermi paradox as addressed in D. A. Xiaolin Spires “But Still I Smile.” Plenty of material here for discussion of the sort we routinely do here on Centauri Dreams!

Previous post: The Odds on Intelligent Life in the Universe