Hard on the heels of the confirmation of Proxima Centauri b, we get news of Proxima c, which has now been analyzed in new work by Fritz Benedict (McDonald Observatory, University of Texas at Austin). Benedict has presented his findings at the ongoing virtual meeting of the American Astronomical Society, which ends today. The work follows up and lends weight to the discovery of Proxima c announced earlier this year by a team led by Mario Damasso of Italy’s National Institute for Astrophysics (INAF), which had used radial velocity methods to observe the star. We need further work, however, to say that Proxima c has been confirmed, as Dr. Benedict explained in an email this morning.

But first, let’s straighten out a question of identity. Yesterday, when discussing the confirmation of habitable zone world Proxima b, we talked about a second signal in data culled by the ESPRESSO spectrograph. If the second ESPRESSO signal does turn out to be a planet, it will be a third Proxima Centauri planet, not Proxima c. That signal does not rise to candidate planet status, nor does the ESPRESSO team claim it as such, but it suggests a minimum mass about a third of Earth’s at an orbital distance inside Proxima b in a five-day orbit. 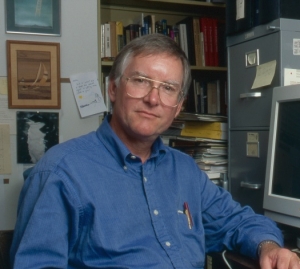 Proxima c as studied by Benedict is a different world entirely. What the new work addresses is the Damasso finding of a planet in a 1,907-day orbit at a distance of 1.5 AU, well outside the star’s habitable zone. Seeing Damasso’s work, Benedict made the decision to re-examine data he had collected on Proxima Centauri using the Fine Guidance Sensors (FGS) on the Hubble Space Telescope. This is a classic case of tapping old data, as the Hubble work was done in the 1990s.

And while Damasso used radial velocity methods (examining the star’s movements toward and away from Earth as influenced by planetary companions), the Hubble FGS, which were designed for pointing accuracy, allowed Benedict to use astrometry, the measurement of the positions and motions of stars. In the earlier study, Benedict worked with Barbara MacArthur, also at McDonald Observatory, to look for planets with orbital periods of 1,000 days or fewer, and found none. A re-investigation of the dataset looking for planets in longer orbital periods turned up the signal at 1,907 days.

Benedict then turned to images collected by INAF’s Raffaele Gratton using the SPHERE instrument on the Very Large Telescope in Chile, which showed what could be Proxima c at several points in its orbit. In An Image of Proxima c?, I ran a figure from the Gratton paper reproduced below, along with the paper’s caption. 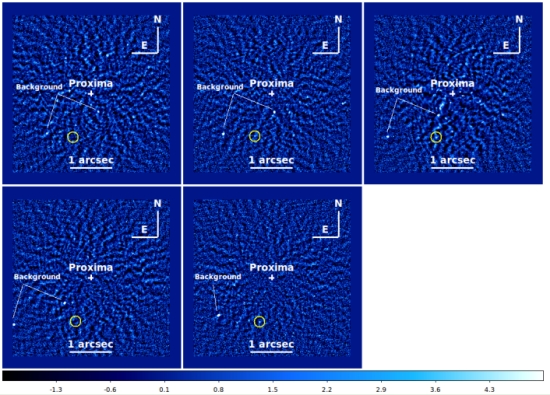 What we now have on Proxima c, then, is the result of Hubble astrometry, radial velocity studies (Damasso et al.) and direct imaging (Gratton et al.), all of which allowed Benedict to refine the mass of the planet to about 7 times that of Earth. Older data serve us well.

“Basically, this is a story of how old data can be very useful when you get new information,” Benedict said. “It’s also a story of how hard it is to retire if you’re an astronomer, because this is fun stuff to do!”

Amen to that. Indeed, it’s hard to see how any astronomers specializing in planets around other stars could bring themselves to retire as we go ever deeper into what will surely be described as the ‘golden age’ of exoplanet studies.

When I contacted Dr. Benedict this morning, he told me that for now, his official statement on Proxima Centauri c is “A Preliminary Mass for Proxima Centauri C,” in Research Notes of the AAS Volume 4, Issue 4, id.46 (full text).

Because the individual detections from FGS, radial velocity and imaging, are all at the limit of detection, we should look toward more observations from SPHERE and future Gaia data on orbital perturbation at Proxima Centauri to serve as a further check for confirmation.