55 Cancri e is a confirmed planet, and thus a departure from our topic of the last two days, which was the act of exoplanet confirmation as regards Proxima Centauri b and c, the latter still in need of further work before it can be considered confirmed. But 55 Cancri e has its uses in offering a tight orbit around a Sun-like star that can be detected using the transit method. That was just what was needed for ASTERIA (Arcsecond Space Telescope Enabling Research in Astrophysics), a technology demonstration mission involving a tiny CubeSat.

Sara Seager (MIT) has been at the heart of the investigation of CubeSats as exoplanet research platforms. I think the idea is brilliant. If we want to mount the most effective search of nearby Sun-like stars for Earth analogs, multiple telescopes must be in use. CubeSats are cheap. Why not launch a fleet of them, each with the task of monitoring a single star at a time. Launched in 2017, ASTERIA was the prototype, a nanosatellite equipped with precision pointing control and thermal stability of the sort needed to meet the tight tolerances of such observations. 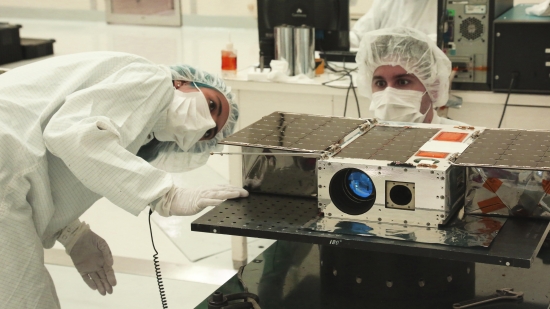 Image: Left to right: Electrical Test Engineer Esha Murty and Integration and Test Lead Cody Colley prepare the ASTERIA spacecraft for mass-properties measurements in April 2017 prior to spacecraft delivery ahead of launch. ASTERIA was deployed from the International Space Station in November 2017. Credit: NASA/JPL-Caltech.

ASTERIA is a collaboration between the Jet Propulsion Laboratory and MIT, one in which MIT retains the lead in science operations while JPL handles overall project management. Seager is principal investigator on the project. Three mission extensions pushed the original 90 day prime mission into extensive prototype testing, which culminated in the CubeSat using its fine pointing control to detect 55 Cancri e’s transits. This is quite an achievement for the tiny satellite, given the need for a steady platform without movement or vibration as the star is examined.

And ponder this: 55 Cancri e blocks only 0.04% of the host star’s light. Mary Knapp is ASTERIA project scientist at MIT’s Haystack Observatory and lead author of the paper on this work, which will appear in the Astronomical Journal:

“We went after a hard target with a small telescope that was not even optimized to make science detections – and we got it, even if just barely. I think this paper validates the concept that motivated the ASTERIA mission: that small spacecraft can contribute something to astrophysics and astronomy.” 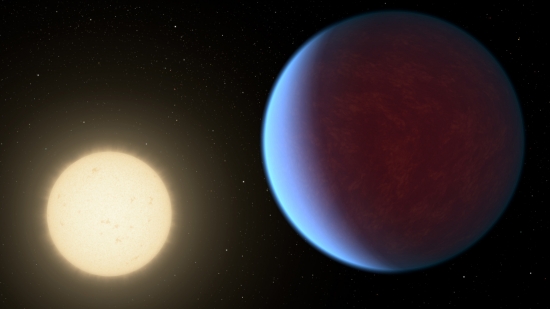 Image: The super-Earth exoplanet 55 Cancri e, depicted with its star in this artist’s concept, likely has an atmosphere thicker than Earth’s but with ingredients that could be similar to those of Earth’s atmosphere. Scientists say the planet may be entirely covered in lava. The planet is so close to its star that one face of the planet consistently faces the star, resulting in a dayside and a nightside. Credit: NASA/JPL-Caltech.

Yesterday we saw how data from three different sources were used to investigate Proxima Centauri c, strengthening the case for its existence but not yet confirming it. On its own, the ASTERIA data would be suggestive of a planet but not proof of it, but it was when comparing the CubeSat data with previous observations that it could be determined that the CubeSat had indeed seen the planet. As we develop CubeSat capabilities, we can use them to follow up on detections made by larger telescopes, focusing on one star and keeping our gaze fixed.

That’s especially useful for potential Earth analogs, where around G-class stars orbital times are long enough to require persistence if we are to see a transit. Thus it’s good news that Sara Seager has been awarded a NASA Astrophysics Science SmallSat Studies grant to develop a follow-on mission involving a constellation of satellites, each about twice the size of ASTERIA.

This excerpt from the paper describes the constellation concept:

ASTERIA was a successful technology demonstration of a future constellation of up to dozens of satellites, dubbed the ExoplanetSat Constellation. Each satellite would share ASTERIA’s precision pointing and thermal control capabilities, operate independently from the others, but may have different aperture sizes in order to reach down to fainter stars than ASTERIA’s current capability. The primary motivation is the fact that if there is a transiting Earth size planet in an Earth-like orbit about the nearest, brightest (V<7) Sun-like stars, we currently have no way to discover them; current missions saturate on these bright stars. The ultimate goal for the constellation is to monitor dozens of the brightest sun-like stars, searching for transiting Earth-size planets in Earth-like (i.e., up to one year) orbits.

The advantages of this ‘fleet’ approach are apparent. The paper continues:

Because the brightest sun-like stars are spread all across the sky, a single telescope will not do. Instead, each satellite would monitor a single sun-like star target of interest for as long as possible, before switching to another star, with targets only limited by the Sun, Earth and Moon constraints. To narrow down the approximately 3,000 target stars brighter than V=7, one would have to find a way to constrain the stellar inclinations and assume the planets orbit within about 10 degrees of the stars equatorial plane. This would reduce the number of target stars from about 3000 to about 300 (Beatty & Seager 2010), a much more tractable number of targets. The ExoplanetSat Constellation has a unique niche in context of existing and planned space transit surveys…, but is still in concept phase.

How to keep these spacecraft small? The use of CMOS detectors (complementary metal-oxide-semiconductor) working in visible light allowed ASTERIA to operate without a large cooling system, as would have been required by a CCD (charge-coupled device) to keep the instrument cold. We’ll follow MIT’s CubeSat work as the lessons learned from ASTERIA are drawn into the next design.

The paper is Knapp et al., “Demonstrating high-precision photometry with a CubeSat: ASTERIA observations of 55 Cancri e,” in process at the Astronomical Journal (preprint). Thanks to Centauri Dreams regular Andrew Tribick for the heads-up on this paper.

Next post: Are Classic Habitable Zones Too Wide for Complex Life?