Finding out that Titan is migrating away from Saturn should cause little surprise. Our own Moon moves away from the Earth at about 38 millimeters per year (even as Earth’s rotation slows ever so slightly, lengthening the day by 23 microseconds every year). Titan’s gravitational pull on Saturn causes frictional processes inside the giant world that ultimately impart energy to Titan, moving it away from its host in a similar way. The surprise attendant to a new paper on this phenomenon is the size of the movement, about 100 times greater than had been expected.

Tidal friction within Saturn causes its moons to migrate outwards, driving them into orbital resonances that pump their eccentricities or inclinations, which in turn leads to tidal heating of the moons.

What we’re wrestling with here are the processes of energy dissipation in giant planets, which determine the timescale for their moons’ tidal migration. The theory advanced in this work may explain them.

The paper appears in Nature Astronomy, with Valéry Lainey (Paris Observatory) as lead author. Two teams of scientists used both astrometric and radiometric datasets, two different approaches into the same question, to measure Titan’s orbit over a ten year period. Astrometry produced measurements of Titan’s position in relation to background stars, tapping data from the Cassini orbiter. The radiometry work measured Cassini’s velocity as it was affected by the gravitational influence of Titan, revealed by analysis of the spacecraft’s radio transmissions during ten close flybys of the giant moon.

Usefully, the two datasets produced results in tight agreement. Co-author Jim Fuller (Caltech) proposed in 2016 that Titan’s migration rate would be considerably faster than predicted by standard tidal theories. Fuller’s idea was that Titan’s effect on Saturn, a gravitational squeeze at a particular frequency, would create strong oscillations, what the paper refers to as “inertial waves,” inside the planet. The process is a tidal forcing effect known as ‘resonance locking.’ Saturn’s oscillations, Fuller believed, would cause energy to be dissipated, allowing Titan to migrate outward at a faster rate only weakly sensitive to orbital distance.

The Cassini data from two different analyses confirm what Fuller has been saying. Indeed, whereas the prediction had earlier been that Titan would be migrating outward at 0.1 centimeters per year, the actual number is 11 centimeters per year. Resonance locking means that we can’t assume that moons like Titan form at the orbital distance at which we see them now. Instead, we see at Saturn a system that Fuller believes evolved far more dynamically. 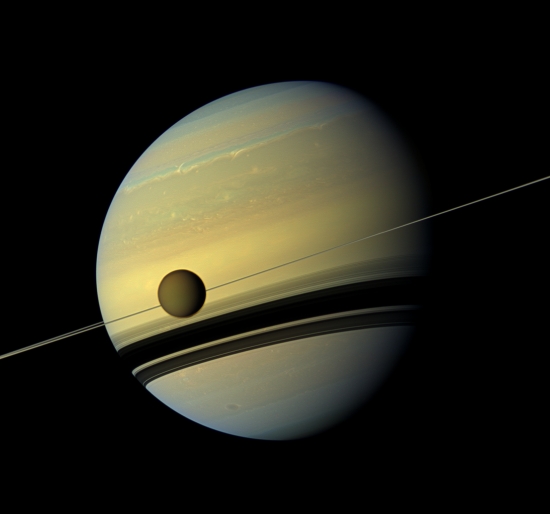 Image: A giant of a moon appears before a giant of a planet undergoing seasonal changes in this natural color view of Titan and Saturn from NASA’s Cassini spacecraft. Titan, Saturn’s largest moon, measures 5,150 kilometers across and is larger than the planet Mercury. This mosaic combines six images — two each of red, green and blue spectral filters — to create this natural color view. The images were obtained with the Cassini spacecraft wide-angle camera on May 6, 2012, at a distance of approximately 778,000 kilometers)from Titan. Image scale is 29 miles (46 kilometers) per pixel on Titan. Credit: NASA/JPL-Caltech/Space Science Institute.

So we’re beginning to re-think how planets affect the orbits of their moons. These results suggest that Titan started out much closer to Saturn, with the system of moons expanding more quickly than earlier thought. Rather than assuming that outer moons like Titan migrated outward more slowly than inner moons, we learn that these outer moons can migrate at a similar rate. Migration turns out to be even more complex than first believed, with results at Saturn that have implications for how we study far more distant systems including exoplanets around host stars. Thus the paper’s conclusion:

Resonance locking could operate in other moon systems, such as the Jovian system, where it might drive the outward migration of Io/Europa/Ganymede and predicts a much smaller effective Q [the tidal quality factor] for Callisto if it is caught in a resonance lock. Resonance locking can also act in stellar binaries and exoplanetary systems, but it will not always dominate tidal dynamics, for instance, at very close separations when equilibrium tidal dissipation is more important, or when resonances are saturated by chaotic or non-linear effects. But resonance locking could be especially important at wider separations where equilibrium tidal dissipation is negligible (as it is for Titan’s migration), or in situations when a star or planet evolves on a relatively short timescale owing to a rapid evolutionary phase, accretion, magnetic braking or gravitational wave-driven inspiral.