Trident: Keeping an Eye on the Triton Flyby

38 K, which translates to -235 Celsius or -390 Fahrenheit, is cold enough to allow atmospheric nitrogen to condense as surface frost, which appears to be what is happening on Neptune’s large moon Triton. This is an intriguing place, with pinkish deposits at the enormous south polar cap that are thought to contain methane ice — the color would derive from reactions with sunlight to form a variety of pink or red compounds. Moreover, there are geyser-like plumes here that leave dark streaks over the ices, some of them active when Voyager 2 flew past.

All this and Triton’s odd ‘cantaloupe’ terrain, still mysterious, and what appear to be landscape features produced by liquid eruptions from Triton’s interior. Absorbed by Triton and its mysteries for decades now, I’m all in on a Discovery Program mission concept called Trident, now under discussion at NASA (see Firming Up the Triton Flyby for my initial take on this one). It has been 31 years since Voyager’s August 25, 1989 flyby. I still have TV coverage of the event, hours of it, preserved in the now archaic VHS video tape format.

There was a bit of the New-Horizons-at-Pluto feel to the Neptune encounter, because what Triton was showing us was a young surface obviously resurfaced again and again with fresh material. Thus even then we were forced to consider what processes could drive this activity at the outer rim of the Solar System. What might be under the ice? A surviving ocean? Let’s take another look at the mission and its possibilities.

Louise Prockter (Lunar and Planetary Institute/Universities Space Research Association, Houston) is principal investigator for Trident, which would be managed at JPL:

“Triton has always been one of the most exciting and intriguing bodies in the solar system. I’ve always loved the Voyager 2 images and their tantalizing glimpses of this bizarre, crazy moon that no one understands.”

“Triton is weird, but yet relevantly weird, because of the science we can do there. We know the surface has all these features we’ve never seen before, which motivates us to want to know ‘How does this world work?’ As we said to NASA in our mission proposal, Triton isn’t just a key to solar system science – it’s a whole keyring: a captured Kuiper Belt object that evolved, a potential ocean world with active plumes, an energetic ionosphere and a young, unique surface.” 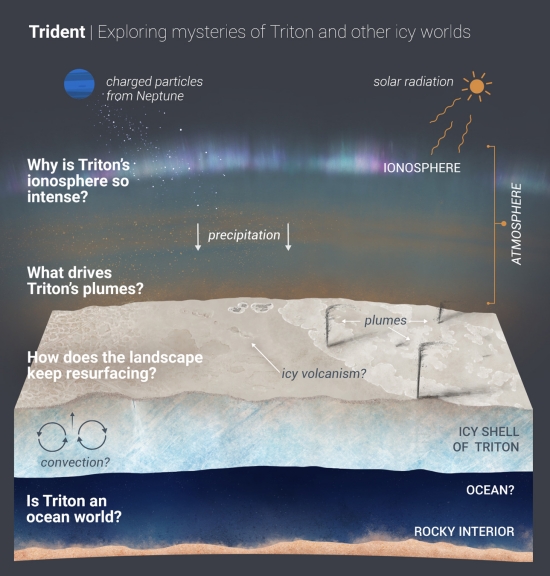 Image: A new Discovery mission proposal, Trident would explore Neptune’s largest moon, Triton, which is potentially an ocean world with liquid water under its icy crust. Trident aims to answer the questions outlined in the graphic illustration above. Credit: NASA/JPL-Caltech.

Remember, Trident is still no more than a mission concept, which means it’s in a competition, in this case with three other entrants in NASA’s Discovery Program, which complements larger flagship missions like Cassini with smaller missions having shorter development times. The other concepts: VERITAS (Venus Emissivity, Radio Science, InSAR, Topography, and Spectroscopy); DAVINCI+ (Deep Atmosphere Venus Investigation of Noble gases, Chemistry, and Imaging Plus); and Io Volcano Observer (IVO). Each of the nine-month studies receives $3 million to develop a Concept Study Report, with up to two missions selected for further development.

Given its likely origins, Triton gives us another look at a Kuiper Belt object, one that found its way into its current retrograde orbit around Neptune at an extreme tilt of 23 degrees from the planet’s equator. The moon’s ionosphere is 10 times more active than that of any other moon, an oddity given how far Triton is from the Sun. Nitrogen snows keep up a climatic churn here, while energy in the interior is produced by gravitational interactions with the parent planet. The matter is considered in this mission summary from the 50th Lunar and Planetary Science Conference (2019):

The possibility of an endogenic heat source is considered more likely over the past few years, given recent studies that have suggested sufficient heat to maintain an internal ocean. Radiogenic heating alone may play an important role, possibly providing sufficient heat to sustain an ocean over ~4.5 Ga [8]. Capture into orbit around Neptune [9, 10 and references therein] would have almost certainly resulted in substantial heating [11]; the time of capture is not constrained, but if sufficiently recent some of that heat may be preserved. Finally, despite having a highly circular orbit, Triton’s high inclination also results in significant obliquity, which should be sufficient to maintain an internal ocean if sufficient “antifreeze” such as NH3 is present [12]. Confirmation of the presence of an ocean would establish Triton as arguably the most exotic and probably the most distant ocean world in the solar system, potentially expanding the habitable zone to 30 AU.

There’s a lot of territory to explore at Triton, given that Voyager 2 data yielded a view of no more than 40 percent of its surface. If Trident flies, we’ll capture more views of the area where Voyager 2 found plumes, making for useful comparisons. The young surface may be no more than 10 million years old — note the lack of craters in the now familiar image below. 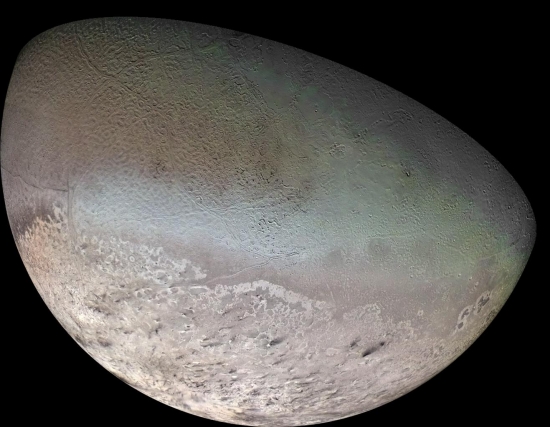 Image: Global color mosaic of Triton, taken in 1989 by Voyager 2 during its flyby of the Neptune system. Color was synthesized by combining high-resolution images taken through orange, violet, and ultraviolet filters; these images were displayed as red, green, and blue images and combined to create this color version. Credit: NASA/JPL/USGS.

Interior oceans may be the key to understanding many outer system objects, from Europa and Enceladus to Triton and perhaps Pluto itself. Trident would carry a magnetometer to probe the moon’s magnetic field to firm up or refute the ocean theory; a high-resolution mapping and compositional infrared spectrometer for characterizing surface materials; a narrow-angle camera for the largely unseen anti-Neptune hemisphere; a wide-angle camera for imaging the sub-Neptune hemisphere to look for signs of change over time; a gravity and atmospheric occultation radio system; and a plasma spectrometer to sample Triton’s outer atmosphere.

Trident would pass within 500 kilometers of Triton, actually inside its atmosphere, and close enough for high-quality magnetometer data, while passage through a total eclipse will allow atmospheric occultations. A proposed launch date is October of 2025, with a gravitational assist at Jupiter for a 2038 encounter at Triton. It would be good to make these dates, as the gravitational slingshot window with Jupiter opens only once every 13 years. This New Horizons-like mission — the concept uses heritage components and builds on New Horizons concepts of operation — has the potential to yield a similarly useful trove of data.

The mission summary I referred to above is Prockter, et al., “Exploring Triton with Trident: A Discovery-Class Mission,” 50th Lunar and Planetary Science Conference 2019 (LPI Contrib. No. 2132), available here.