A Suggestive Model for Europa’s Ocean

What we learn about Europa may resonate with other moons in the Solar System, making the study of this ‘ocean world’ even more valuable as we look elsewhere among the gas giants. I notice this morning that a team of researchers from the Jet Propulsion Laboratory has presented results on Europa at the Goldschmidt conference, held virtually from the 21st to 26th of this month. The work models geochemical reservoirs within Europa, analyzing the composition and properties of the core, a layer of silicates, and the ocean itself.

In the absence of hard data, models will have to do, and here we learn that a plausible composition for the Europan ocean can be advanced, one that postulates the breakdown of water-bearing minerals and the release of the trapped water. Mohit Melwani Daswani is lead researcher:

“We find that different minerals lose water and volatiles at different depths and temperatures. We added up these volatiles that are estimated to have been lost from the interior, and found that they are consistent with the current ocean’s predicted mass, meaning that they are probably present in the ocean.” 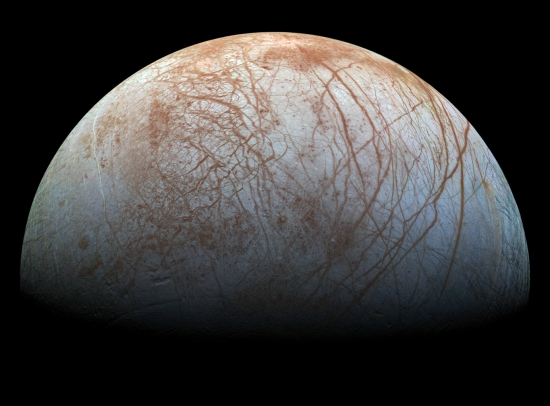 Image: The puzzling, fascinating surface of Jupiter’s icy moon Europa looms large in this newly-reprocessed color view, made from images taken by NASA’s Galileo spacecraft in the late 1990s. This is the color view of Europa from Galileo that shows the largest portion of the moon’s surface at the highest resolution. The view was previously released as a mosaic with lower resolution and strongly enhanced color. To create this new version, the images were assembled into a realistic color view of the surface that approximates how Europa would appear to the human eye. Credit: NASA/JPL-Caltech/SETI Institute.

Much depends upon internal sources of heat, and here we need data from future missions to the moon. According to the model, however, early radioactive decay or tidal movement below the surface could force the breakdown of water-containing minerals, releasing the water that formed the ocean. A mildly acidic ocean results from these calculations, highly concentrated in carbon dioxide, calcium and sulfate. The team used data from the Galileo mission as well as the Hubble instrument showing chloride on Europa’s surface, indicating that the water probably became chloride-rich. Says Daswani: “In other words, its composition became more like oceans on Earth. We believe that this ocean could be quite habitable for life.”

Geologist Steve Mojzsis (University of Colorado), not a part of the JPL team, sees the work in terms of chemical equilibrium, or more interestingly, the lack of it:

“A long-standing question over whether a ‘cloaked ocean’ world like Europa could be habitable boils down to whether it can sustain a flow of electrons which might provide the energy to power life. What remains unclear is whether such icy moons could ever generate enough heat to melt rock; certainly interesting chemistry takes place within these bodies, but what reliable flow of electrons could be used by alien life to power itself in the cold, dark depths? A key aspect that makes a world ‘habitable’ is an intrinsic ability to maintain these chemical disequilibria. Arguably, icy moons lack this ability, so this needs to be tested on any future mission to Europa.”

Europa Clipper is on the horizon, of course, and Daswani sees the current modeling as part of the scientific preparation for the mission. Noting the need to refine our ideas on the migration of fluids through Europa’s rocky interior, he adds that the current model of ocean formation could be readily extended to neighboring Ganymede, and even to Saturn’s large moon Titan. The JPL researchers are now collaborating with colleagues in Nantes and Prague to consider the possibility of seafloor volcanoes as contributing factors to Europa’s chloride-rich water.

Or is it actually chloride-rich? In 2019, Samantha Trumbo (Caltech) produced a paper with colleague Michael Brown and JPL’s Kevin Hand that studied the issue. How closely we can link the moon’s icy surface shell with the underlying ocean is an open question. Note this:

The Daswani paper is not yet available, so we’ll need to revisit this work in coming months. On the question of chloride on Europa’s surface, the paper is Trumbo et al., “Sodium Chloride on the Surface of Europa,” Science Advances Vol. 5, no. 6 (12 Jun 2019). Full text.

Next post: A 20th Anniversary Review of Ward and Brownlee’s ‘Rare Earth’