Perhaps the hottest planet ever discovered spotlights yet another way to interpret light curves produced by transiting worlds. KELT-9b comes out of data gathered by the KELT transit survey, the acronym standing for Kilodegree Extremely Little Telescope. KELT consists of two robotic telescopes, one at Winer Observatory in southeastern Arizona, the other at the South African Astronomical Observatory in Sutherland, South Africa. The planet orbits an A-class star in Cygnus about 670 light years away and turned up in the KELT data in 2017.

We’ve learned a lot more about KELT-9b thanks to the TESS mission, allowing us to understand just how unusual this planet is. 2.9 times as massive as Jupiter, the world orbits its star in 36 hours, receiving 44,000 times the energy from its host that Earth receives from the Sun. Reaching 4,300 degrees Celsius, this is a tidally locked planet whose dayside is hotter than the surfaces of some stars. Its orbital path takes it almost directly above both the star’s poles.

But this mix gets even more intriguing. The primary, KELT-9, is roughly twice the size of the Sun, 56 percent hotter, and spins 38 times as fast. That makes for a complete stellar rotation in 16 hours. As you would imagine, the rapid spin causes the star to deform, flattening at the poles and broadening at the equator. As a result, we run into the phenomenon known as gravity darkening — the poles brighten as the equatorial region cools and dims by comparison.

We get a temperature differential of almost 800 degrees Celsius. The effects on the transit light curve are interesting. Beginning near the star’s poles, the transit blocks less light as KELT-9b travels over the stellar equator. We have an asymmetry here we can work with to gain information about the temperature and brightness changes over the surface of the star, learning more about its shape and orientation.

Jason Barnes (University of Idaho) is a co-author of the paper on this work:

“Of the planetary systems that we’ve studied via gravity darkening, the effects on KELT-9 b are by far the most spectacular. This work goes a long way toward unifying gravity darkening with other techniques that measure planetary alignment, which in the end we hope will tease out secrets about the formation and evolutionary history of planets around high-mass stars.” 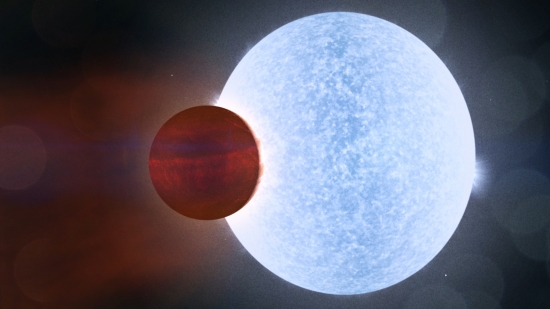 Depending on which part of the star is being referenced, the phenomenon behind gravity darkening is sometimes called gravity brightening, reflecting the fact that the oblate shape of such a rapidly spinning star causes higher surface gravity at the poles, producing higher temperature and brightness; by contrast, the equator is darker. Because of the temperature differential on the surface of the star, KELT-9b experiences an unusual kind of seasonality, hotter over the poles, colder over the star’s equator. A kind of summer, a kind of winter, with each season lasting nine hours, only to repeat during the brief year.

A planet like this is going to be useful for research into hot Jupiters. There is a clear trend among such worlds in that they are often spin-orbit misaligned. The paper continues: 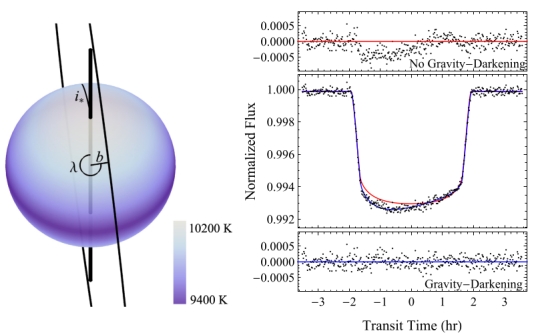 Image: This is Figure 2 from the paper. Caption: (Left) KELT-9 b begins its transit near the star’s hot pole and moves toward the star’s cooler equator. Our transit analysis directly measures the stellar inclination ( i ), the planet’s projected alignment (λ), and the orbital inclination (i.e., the impact parameter b). We find that KELT-9 varies in effective temperature by ∼800 K between its hot poles and cooler equator. (Right) KELT-9 b’s phase-folded primary transit from TESS. The transit depth steadily decreases throughout the eclipse, indicating that KELT-9 b begins its transit near one of the host star’s hotter poles and moves toward the dimmer stellar equator. Credit: Ahlers et al.

Models of rapidly rotating stars are still being developed, but will be needed to analyze the high number of such stars expected to be discovered by TESS. In fact, I was surprised to learn that in a previous paper, lead author John Ahlers (NASA GSFC) had estimated on the order of 2,000 exoplanets will turn up orbiting A/F stars in the TESS data, and the expectation is that a large number of these will be spin-orbit misaligned. Thus KELT-9b gives us a window into fast rotators, which are expected to comprise a large number of the A/F systems discovered.