I hadn’t planned to write about the recent work out of the University of Exeter on Beta Pictoris, but yesterday’s article on KELT-9b dealt with planetary alignment, given that the planet shows marked spin-orbit misalignment. At Beta Pictoris, an international team of researchers led by Exeter’s Stefan Kraus has carried out measurements of the spin-orbit alignment of Beta Pictoris b, a gas giant orbiting a young star in an orbit about as distant as Saturn from the Sun. Here we have the first spin-orbit alignment measurement of a directly imaged planetary system.

How such alignments occur is clearly relevant to planet formation theories. There’s a bit of astronomy history here, for spin-orbit issues became significant for both Immanuel Kant (1724-1804) and Pierre-Simon Laplace (1749-1827), who looked at spin-orbit alignment in our own Solar System. It was apparent to both that the planets known to them orbited the Sun not only in alignment with each other but in alignment with the Sun’s axis as well. Hence the idea that the entire system formed from a rotating planetary disc, and a flattened one at that.

Other planetary systems may follow different paths of development, as Kraus notes:

“It was a major surprise when it was found that more than a third of all close-in exoplanets orbit their host star on orbits that are misaligned with respect to the stellar equator. A few exoplanets were even found to orbit in the opposite direction than the rotation direction of the star. These observations challenge the perception of planet formation as a neat and well-ordered process taking place in a geometrically thin and co-planar disc.”

Which is to say that close-in exoplanets can depart markedly from the apparent norm, making the study of these hot Jupiters significant for initial formation scenarios. Kraus and company went to work with the GRAVITY instrument at the Very Large Telescope Interferometer (VLTI) in Chile, exploiting the fact that a star’s spectral lines show a spatial displacement — an exceedingly small one, to be sure — caused by gas absorption in the star’s atmosphere. The team used this effect to determine the orientation of the star’s rotation axis.

At Beta Pictoris, some 63 light years from Earth, a displacement about 1/100th the apparent diameter of the star itself is used to demonstrate that planet and star are as well-aligned as our own Solar System. Thus the classic model of planet formation seems to apply, with implications for the hot Jupiters we see that demonstrate marked spin-orbit misalignment. From the paper (internal references removed for brevity):

Our finding of spin-orbit alignment for β Pic b suggests that this planet formed in a coplanar disks without primordial misalignments. This is in contrast to theories that describe the occurence of obliquities as a natural by-product of the star formation process, for instance through turbulent motions in the star-forming cloud and fluid-dynamical effects during disk formation. In case our finding of a well-aligned system is representative for wide-separation planets, it would suggest that the population of Hot Jupiters on oblique orbits (found in RM survey at orbit separations between ∼ 0.02 and 0.3 au) are likely transferred to oblique orbits through dynamical processes post-formation. Possible mechanisms include planet-planet scattering, stellar flybys, or the Kozai-Lidov mechanism, where a wide companion orbiting a close binary on a highly inclined orbit can induce oscillations in inclination/eccentricity of the close pair. 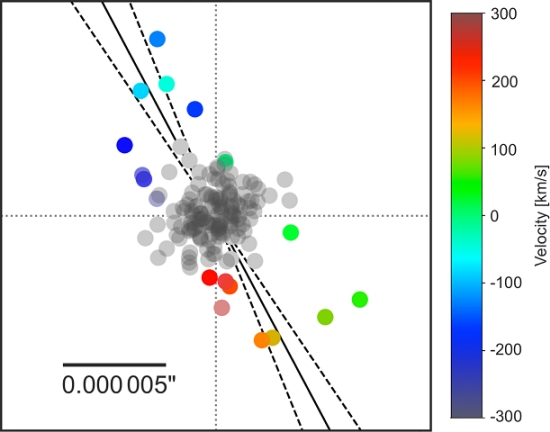 Image: To derive the stellar rotation axis of Beta Pictoris the team used the unique high angular and high spectral resolution mode of VLTI/GRAVITY to measure shifts in the centroid position in the hydrogen Brackett-gamma absorption line on micro-arcsecond scales. In the blue-shifted part of the absorption line, the centroid of the emission is displaced to the North-East, which indicates that the South-Western hemisphere of the star is approaching the observer. Credit: Kraus et al. / University of Exeter.

Much depends on just how representative Beta Pictoris b really is of gas giants with wide separation from their star. The authors propose a new high-spectral resolution interferometric instrument at the VLTI to measure the spin-orbit alignment of hundreds of gas giants, dramatically increasing the data on long-period planets. Kraus is involved in a proposed VLTI
visitor instrument called BIFROST that could enable such an observing campaign. This, in turn, should stoke the discussion of planet formation and system evolution when it comes to architectures as extreme as the one we see at KELT-9.

Next post: What Can SETI Scholars Learn from the Covid-19 Pandemic?