In addition to being a rather well-known character on television, SPOCK also stands for something else, a software model its creators label Stability of Planetary Orbital Configurations Klassifier. SPOCK is handy computer code indeed, determining the long-term stability of planetary configurations at a pace some 100,000 times faster than any previous method. Thus machine learning continues to set a fast pace in assisting our research into exoplanets.

At the heart of the process is the need to figure out how planetary systems are organized. After all, after the initial carnage of early impacts, migration and possible ejection from a stellar system, a planet generally settles into an orbital configuration that will keep it stable for billions of years. SPOCK is all about quickly screening out those configurations that might lead to collisions, which means working out the motions of multiple interacting planets over vast timeframes. To say this is computationally demanding is to greatly understate the problem. 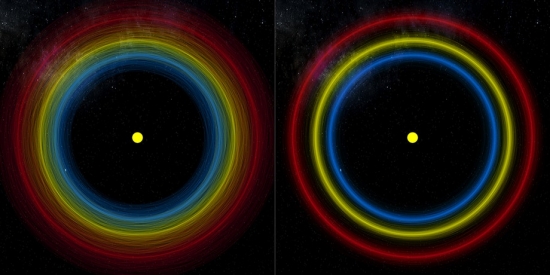 Image: While astronomers have confidently detected three planets in the Kepler-431 system, little is known about the shapes of the planetary orbits. The left-hand image shows many superimposed orbits for each planet (yellow, red and blue) consistent with observations. Using machine learning methods, researchers removed all unstable configurations that would have resulted in planetary collisions and would not be observable today, leaving only the stable orbits (right-hand image). Using previous methods, this process would have taken more than a year of computing time. The new method instead takes just 14 minutes. Credit: D. Tamayo et al./Proceedings of the National Academy of Sciences 2020.

Thus we rule out dynamically unstable possibilities in, compared to older methods, the blink of an eye, a useful fact for making sense of planetary systems we can observe, and possibly giving us information about the composition of some of these worlds. Bear in mind that while we’ve discovered more than 4,000 planets around other stars, almost half of these occur in multi-planet systems, so understanding orbital architectures is vital.

The lead author on this work is Daniel Tamayo, a NASA Hubble Fellowship Program Sagan Fellow in astrophysics at Princeton. As you would expect, Tamayo and his co-authors relish the resonance of the acronym, as witness the note that closes their paper:

We make our ≈ 1.5-million CPU-hour training set publicly available (https://zenodo.org/record/3723292), and provide an open-source package, documentation and examples (https://github.com/dtamayo/spock) for efficient classification of planetary configurations that will live long and prosper.

A good choice, and an acronym with almost as much going for it as my absolute favorite of all time, TRAPPIST (Transiting Planets and Planetesimals Small Telescope), which contains within it not only a description of the twin telescopes but a nod to some of the world’s best beers (the robotic telescopes are operated from a control room in Liège, Belgium).

Thus we move from brute force calculations run on supercomputers to machine learning methods that quickly eliminate unstable orbital configurations, replacing tens of thousands of hours of computing time with the time it takes to quaff a Westmalle Tripel (well, maybe a Westmalle Dubbel). Configurations that would, over the course of a few million years, result in planetary collisions — the team calls these ‘fast instabilities’ — are identified.

The paper notes the relevance of the work to compact systems and the ongoing observations of TESS:

In the Kepler 431 system with three tightly packed, approximately Earth-sized planets,we constrained the free eccentricities of the inner and outer pair of planets to both be below 0.05 (84th percentile upper limits). Such limits are significantly stronger than can currently be achieved for small planets through either radial velocity or transit duration measurements, and within a factor of a few from transit timing variations (TTVs). Given that the TESS mission’s typical 30-day observing windows will provide few strong TTV constraints [Hadden et al., 2019], SPOCK computationally enables stability constrained characterization as a productive complementary method for extracting precise orbital parameters in compact multi-planet systems.

SPOCK can’t provide a solution to all questions of long-term stability, as Tamayo acknowledges, but by identifying fast instabilities in compact systems, where the issues are the most obvious, it can sharply reduce the options and allow astronomers to focus on likely solutions. Freeing up a significant amount of computer time for other uses is a collateral benefit.

The paper is Tamayo et al., “Predicting the long-term stability of compact multi-planet systems,” Proceedings of the National Academy of Sciences July 13, 2020 (preprint).