A Population of Interstellar Asteroids?

It was hard enough to find ‘Oumuamua, the first object on an interstellar trajectory discovered within our own Solar System. The emergence of new resources like the Large Synoptic Survey Telescope (LSST) should help us develop a preliminary catalog of such interlopers, thought to be not uncommon if we can identify them. But tracking down objects that wandered from one star to another and found their way into residence in our system is another matter entirely.

In April we looked at a study of an unusual set of Centaurs, asteroids whose orbit perpendicular to the orbital plane of the planets and other asteroids raises questions about their origin. A letter to Monthly Notices of the Royal Astronomical Society had appeared, written by Fathi Namouni (Observatoire de la Côte d’Azur, France) and Maria Helena Moreira Morais (Universidade Estadual Paulista, Brazil). The scientists identified what seems to be a population of asteroids that were probably drawn into the Sun’s gravitational pull at the time of the Solar System’s formation, when the Sun’s birth cluster stars would still be nearby. See Identifying Asteroids from Other Stars for a preliminary look at the idea.

The study has now been expanded and appears as a full paper in the same journal, calling renewed attention to the dynamical evolution of this particular branch of the Centaur family. Let’s quickly note that not all Centaurs fit into parameters implying an interstellar origin. Similar to asteroids in size but likely icy in composition, most Centaurs revolve in relatively unexceptional but ultimately unstable orbits in the outer Solar System between Jupiter and Neptune.

Namouni and Morais are interested in the small number of high-inclination Centaurs — and a few at lower inclination — whose computed orbital history points to an origin far from home. The subsequent orbits of these objects may be more stable than we have realized. Says Morais:

“The Solar System formed 4.5 billion years ago in a stellar nursery, with its systems of planets and asteroids. The stars were close enough to each other to foster strong gravitational interactions that led to an exchange of material among the systems. Some objects now in the Solar System must therefore have formed around other stars. Until recently, however, we couldn’t distinguish between captured interstellar objects and objects that formed around the Sun. The first identification was made by us in 2018.” 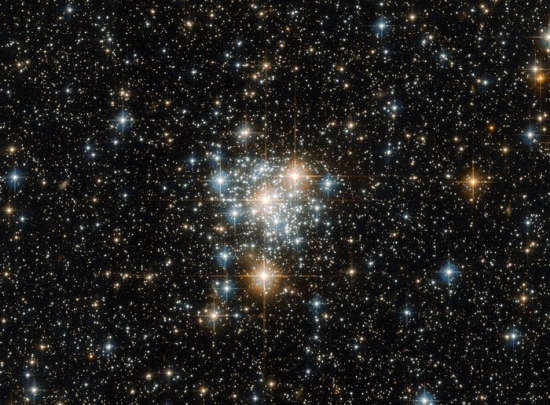 Image: NGC 299 is an open star cluster of a kind similar to the one that produced the Sun, located within the Small Magellanic Cloud. Open clusters are weakly bound collections of stars, all formed from the same massive molecular cloud of gas and dust. Because of this, all the stars have the same age and composition, but vary in mass because they formed at different positions within the cloud. In the close conditions of such a birth cluster, comets and asteroids may have moved readily from star to star. Image credit: ESA/Hubble & NASA.

The object Morais talks about as the duo’s first detection is a retrograde co-orbital asteroid of Jupiter called (514107) Ka‘epaoka‘awela, whose name translates from Hawaiian into the delightful “mischievous opposite-moving companion of Jupiter.” Using computer simulations to unwind Centaur orbits back 4.5 billion years to the formation of the Solar System, the researchers find 19 Centaurs of likely interstellar origin. Again we’re presented with the chance to study objects from another star that may be reachable much closer to home.

The authors contest earlier theories about the origin of Centaurs as being from the primordial planetesimal disk. The paper goes on:

When 4.5 Gyr-stable orbits were found in Paper I for Ka‘epaoka‘awela with a majority of retrograde orbits in Jupiter’s co-orbital region, it was concluded that Ka‘epaoka‘awela is likely of interstellar origin as no internal Solar system dynamical process could produce asteroid orbits with an inclination of 162° at Jupiter’s location at that early epoch. Ka‘epaoka‘awela could be a representative of a class of asteroids captured from the interstellar medium by the Sun and Jupiter owing to the strength of Jupiter’s co-orbital resonance at large inclination that is responsible for shielding the asteroid from disruptive perturbations from the other planets…

And note the whole issue of orbital stability, for an important point in the authors’ work is their contention that there are long-term, stable orbits for interstellar objects that are not as extreme as most of the Centaurs studied here and thought to be interstellar. Indeed, Chiron may be a case of such:

Chiron, in fact, gets more and more interesting. On an eccentric orbit that crosses the orbit of Saturn and extends close to that of Uranus, the object seems to have the composition of a comet. The authors see Chiron either as an outlier that was once part of the planetesimal disk or an interstellar object, and urge further study of low-inclination Centaurs as we learn more about the kind of capture events that occurred in the early days of the Solar System. Some Centaurs may be more orbitally stable, and more interesting, than we have previously thought.

Next post: A Directly Imaged Multi-Planet System around a Sun-like Star

Previous post: The Cathedral and the Starship: Learning from the Middle Ages for Future Long-Duration Projects