A Directly Imaged Multi-Planet System around a Sun-like Star

At this point in the exoplanet hunt, actual images of our quarry are uncommon, but few more so than today’s image, made with the European Southern Observatory’s Very Large Telescope. This is being billed as the first image ever taken of a young Sun-like star accompanied by multiple planets, in this case two gas giants. And I do mean young: At 17 million years old, this star has spawned planets recently enough that their hot glow makes the image possible. 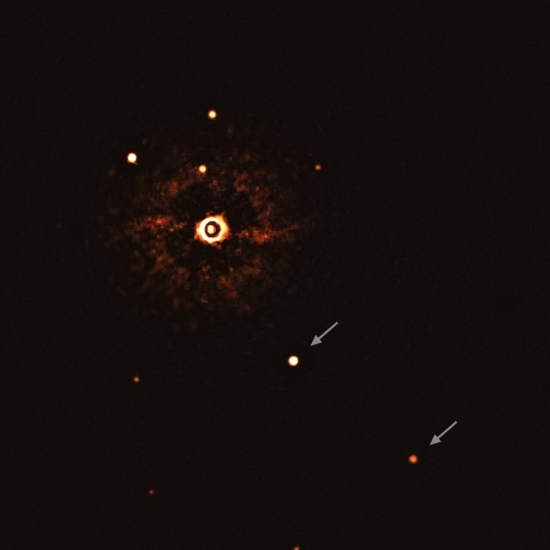 Image: First ever image of a multi-planet system around a Sun-like star. The arrows point to the planets; the other bright objects are background stars. Credit: European Southern Observatory.

Designated TYC 8998-760-1, the host star is some 300 light years away in the southern constellation of Musca (The Fly), with a mass close to that of the Sun, described in the paper on this work as a solar analogue. The two gas giants orbit the star at 160 and 320 AU, and both are more massive than our Jupiter and Saturn, with the inner planet at 14 times Jupiter’s mass and the outer at six times Jupiter’s mass. The youth of the system suggests what our Solar System may have been like early in its formation. Did these gas giants migrate to their current position, or did they form in place?

The answer would depend on the various values for the eccentricities of their orbits, which the authors can vary in their calculations to produce stable orbits on billion-year timescales if the eccentricity is low (near-circular orbits), and a chaotic system with likely future interactions between the planets if the eccentricity is high. It will take further observations to make the call. Young systems like these should prove useful for analyzing both scenarios around other stars, as the authors note, while also pointing to the opportunities for future observation from space:

TYC 8998-760-1 is a prime system to further study the dynamical and chemical properties of two coeval, gravitationally bound, gas giant planets. Continuous astrometric monitoring will constrain the orbital solutions for both companions and thus enable testing of potential formation scenarios. Due to the wide separations of both companions, contaminating flux from the primary is negligible, so spectral characterization at high resolution is easily accessible to determine rotational periods and molecular abundances in the planetary atmospheres… Multi-wavelength photometric variability monitoring with space-based observatories such as HST and JWST… will facilitate studies of the vertical cloud structures in these Jovian companions. Even mid-infrared spectroscopy with JWST/MIRI will be feasible to provide benchmark spectra for theoretical atmosphere models of young, sub-stellar companions at wavelengths longer than 5 microns.

We’ve seen the number of directly imaged worlds increasing because of imagers that use adaptive optics, like the Gemini Planet Imager (GPI) and the Spectro-Polarimetric High-contrast Exoplanet REsearch (SPHERE) instrument. The image above is from SPHERE, mounted on the VLT in Chile, which operates at highest contrast at optical and near-infrared wavelengths. 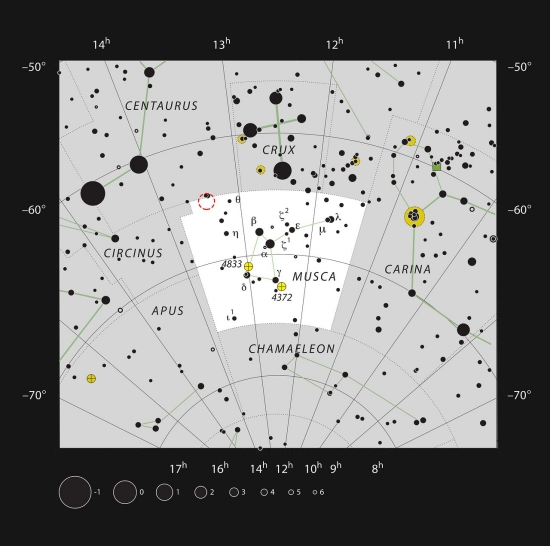 The other two exoplanet systems currently in our catalog with two or more directly imaged planets both involve stars considerably different from the Sun. One of them is found at HR 8799, a 30 million year old star in spectral class A5, with four giant planets orbiting between 15 and 70 AU from their host. The other, at PDS 70, is a K7-class star that is even younger, with an age estimated at 5.4 million years and two accreting protoplanets inside the circumstellar disk.