Aerographite: An Advance in Sail Materials with Deep Space Implications

Invented at the Technical University of Hamburg and developed with the aid of researchers at the University of Kiel, a new material called aerographite offers striking prospects for solar sail missions within the Solar System as well as interstellar precursor implications. Judging from the calculations in a just published paper in Astronomy & Astrophysics, aerographite conceivably enables a mission to Proxima Centauri with a flight time of less than two centuries. We are not talking about laser-driven missions here, but rather meter-scale craft that would be pushed to interstellar velocities by solar radiation; i.e., true solar sails.

But let’s focus near-term before going interstellar. I’ve been talking to René Heller (Max Planck Institute for Solar System Research, Göttingen) about the paper, along with co-authors Guillem Anglada-Escudé (Institut de Ciencies Espacials, Barcelona), Michael Hippke (Sonneberg Observatory, Germany) and Pierre Kervella (Observatoire de Paris). Just what are the prospects for aerographite, and what are its problems? The authors stress that aerographite for space applications implies a development path through laboratory work and near-term experimentation in space. “Before we run, we need to walk,” as Anglada-Escudé told me in an email that summarized how the idea grew.

Anglada-Escudé and Heller had been studying the conditions that would allow a sail pushed by solar radiation, as opposed to laser beaming, to leave the Solar System, developing calculations for the kind of material needed, and initially envisioning a sail made of graphene (about which more in a moment). As Hippke and Kervella joined the discussion, the connection with aerographite was made and the previous computations recalculated. Says Heller:

“Aerographite is both ultralight and opaque (= black) so that it effectively absorbs photons and overcomes the gravitational attraction from the Sun under certain circumstances. We find that a hollow sphere (or shell) with a diameter of a few meters and a shell thickness less than 1 mm would become unbound from the solar system if it were submitted to sunlight in interplanetary space. It could be brought into space as a piggyback mission to any interplanetary mission without adding significant amounts of mass to the payload (because aerographite is so ridiculously lightweight)”.

Adds Anglada-Escudé, on how a material might be ‘unbound’ from the Solar System:

It is known that small dust (mostly SiO2 [silicon dioxide] balls, which are quite dense) in the solar system are blown away at some 100 nanometer sizes, so any material lighter than that should work. Also, one does not need to be reflective. Absorbance is also OK (only a factor of 2 worse than a fully reflective material).

The reference to Starshot is useful because it sets up some technology comparisons I want to make, while also driving home the point that as a near-term goal, something as relatively “local” as a demonstrator released from the International Space Station could move the ball forward. So what I want to do in the course of the next several posts is to examine the Astronomy & Astrophysics paper and consider the uses of aerographite in a variety of mission concepts as we begin to explore how such a sail could be constructed and flown.

But we also need some context, and a nod to a slightly earlier and itself promising sail material gets the story in motion. 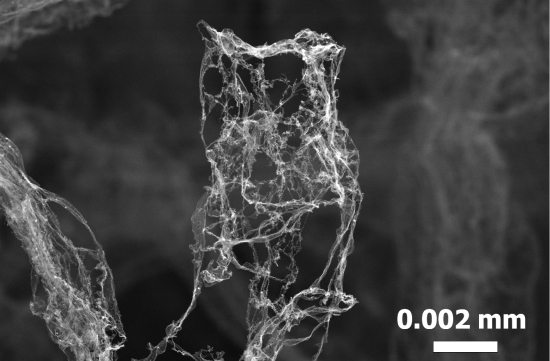 Image; This graphic shows a detail of the world’s lightest material: aerographite. Open carbon tubes form a fine mesh and offer a low density of 0.2 milligram per cubic centimetre. The picture was taken with a scanning electron microscope (SEM). Credit: TUHH.

Sails have been considered for long-duration, conceivably interstellar missions since the days of Robert Forward, and Centauri Dreams readers will also be aware of such seminal works as Greg Matloff’s 1981 paper “Solar Sail Starships—The Clipper Ships of the Galaxy,” which ran in the Journal of the British Interplanetary Society. What we are after is a thin sail that is temperature tolerant and rugged enough to endure its passage through the interstellar medium. Such a sail is usually assumed to be highly reflective, though aerographite will put a new spin on this. A ‘sundiver’ maneuver, taking a shielded sail close to the Sun for deployment at perihelion, was seen as offering travel time to the Centauri stars of perhaps a thousand years. And travel times like that seemed the best we could do with solar sails.

Laser-beaming could conceivably change the equation, and the Breakthrough Starshot effort revolves around a massive, ground-based laser array that would drive small sails up to 20 percent of the speed of light for fast passage to Proxima Centauri or other stars. In any case, the question of materials figures prominently in sail literature. The most studied material to date has been beryllium, but in 2012 Greg Matloff revisited sails with graphene in mind. He described it as “a mono-molecular lattice of carbon atoms” and noted that materials experts and condensed matter physicists had graphene under intense investigation. Matloff saw prospects for graphene in terms of thin-film probes and much larger manned starships:

In its application to interstellar solar sailing, it seems that graphene can exceed the performance of beryllium with less extreme perihelion requirements, peak temperatures and maximum accelerations. Thousand-year transits to Alpha Centauri do not seem out of the question for probes and generation ships using this mode of acceleration and deceleration.

Matloff also noted the problems posed by graphene, pointing to the difficulty of large-scale preparation at high-purity levels and questions involving its performance during a close solar pass, a maneuver that colleague Roman Kezerashvili had analyzed for beryllium sails several years earlier. The question facing Heller, Anglada-Escudé, Hippke and Kervella was whether the newly discovered aerographite could significantly upgrade the performance of a graphene sail, allowing us to reduce travel times to something below that 1,000 year threshold.

Aerographite offered several clear advantages along with some properties that would need to be analyzed and accounted for. It is true that graphene’s extremely low mass per cross section ratio can theoretically enable high velocities. But graphene turns out to be all but transparent, with a reflectivity close to zero. And now we run into difficulties with creating a graphene sail that I want to illustrate by quoting the Heller et al. paper. In the passage that follows, sigma (σ) stands for the mass per cross section ratio, which for graphene is 7.6 × 10−7 kg m−2:

The absorptive and reflective properties of graphene can be greatly enhanced by doping graphene monolayers with alkali metals (Jung et al. 2011) or by sandwiching them between substrates (Yan et al. 2012). But this comes at the price of greatly increasing σ. The limited structural integrity of a graphene monolayer requires additional material thereby further increasing σ and complicating the experimental realization. All of this ultimately ruins the beautiful theory of a pure graphene sail.

To be sure, Matloff and others working on the graphene sail concept are well aware of these issues and various papers have investigated the prospects for surmounting them. But the prospect of an aerographite sail, a material with its own strengths and question marks, gives us a new entrant in the sail arena, now with initial calculations provided by Heller and team. Specifically, what the Astronomy & Astrophysics paper does is to examine a hollow sphere at meter-scale, one made out of aerographite, that can be launched into interplanetary space by conventional rocket and released, allowing solar photon pressure to go to work.

Missions within the Solar System assuming such a sphere with a shell thickness of roughly 0.5 mm could, according to these calculations, reach the orbit of Mars within 60 days, arriving at Pluto’s orbit in 4.3 years. If the material proved capable of withstanding a close solar pass, there are mission prospects for Proxima Centauri in the range of 185 years of travel time.

But a Proxima mission gets way ahead of the game. We need to look at aerographite in terms of what we can learn about it in the near-term, with missions within the Solar System of various complexity part of the learning curve. In the next post, I want to go into how an early aerographite sail could be made, and how deep space sails might be configured, and we’ll consider whether in the near-term, solar as opposed to laser sailing may be our path toward true interstellar precursors. And either tomorrow or in a third post, we need to examine how to overcome some problems raised by this material in terms of both navigation and monitoring / communications.

Next post: Solar Sails: Deeper into the Aerographite Option