Aerographite is an ultra lightweight material made of carbon microtubes, just the sort of thing that seizes the imagination in terms of material for space sails powered by solar photons or laser beam. Such materials are much in my thinking these days and have been for some time, ever since I first read some of Robert Forward’s papers on using laser beaming to boost enormous sails to a substantial fraction of lightspeed. What kind of materials would be used, and how could the mass be kept low enough to allow significant payloads to be deployed?

These days, we think in terms of much smaller sails with miniaturized payloads of the sort advocated by Breakthrough Starshot. But of course advances in sail technology enable a wide range of concepts, and the place to start is with laboratory experiment — this is where we are with aerographite right now — moving into space demonstrators that can be low-cost and near-term. The kinds of missions conceivable with aerographite include fast access to the outer Solar System and, with the help of a close solar pass, interstellar trajectories to nearby stars.

What we are examining in this series of posts is a concept paper that asks for the first time whether aerographite can become a sail material, noting its low cost and our ability to begin testing not just on the ground but in space to find out whether it can carry a payload and survive the stresses of deep space journeys. Lead author René Heller (Max Planck Institute for Solar System Research, Göttingen), with co-authors Guillem Anglada-Escudé (Institut de Ciencies Espacials, Barcelona), Michael Hippke (Sonneberg Observatory, Germany) and Pierre Kervella (Observatoire de Paris), offer a pointer to areas of investigation we will have to address. 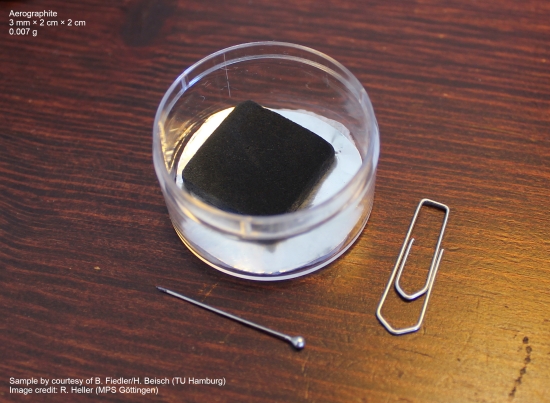 Image: An aerographite sample from the Technical University of Hamburg now under study as its potential as a sail material is examined. Sample courtesy of B. Fiedler/H. Beisch (TU Hamburg). Image by R. Heller (MPS Göttingen).

When the teams at the Technical University of Hamburg and the University of Kiel developed aerographite, they dubbed it “the lightest known material.” It is a synthetic foam connected by carbon microtubes with a density of 180 g/m3. This intriguing material has useful properties indeed, though some of these, as we’re about to see, are problematic. For now, let’s note that aerographite is ultra-black at the 1 mm scale considered in the Hamburg team’s paper (citation in yesterday’s post), though as Guillem Anglada-Escudé explained, its opacity is unclear as we go below that scale, a matter that will have to be addressed.

Aerographite’s opacity is important because we are talking about a sail that functions not through reflectivity but absorptivity. The sail concepts we’ve bandied about in these pages have for the most part revolved around reflection, so let’s pause on this. I was unsatisfied with my own description of an absorptive sail in a rough draft of this post, so I asked René Heller for his own take. An opaque sail, he replied, absorbs any light that impinges upon it:

Think of a shower of photons that bumps into an aerographite sample. The sample is almost entirely black, and so most of the photons will not be reflected but they will transfer their kinetic energy (and their momentum) to the sample. As a consequence, the sample will be heated and “pushed” into the same direction as the incoming photon shower was moving before it got absorbed. This is due to conservation of momentum. Now if the sample were reflective then the incoming photons would bounce back from the sample in some angle. If the sample were 100% reflective and if it had a perfectly flat surface, and if the photons were coming in in a perpendicular angle with respect to the surface, then the sample would receive twice the amount of the momentum that it received in comparison to the absorptive case described above. In other words, reflection is twice as effective as absorption.

And yet absorption in the right material can be enabling. While we begin deeper investigations into aerographite’s properties, it’s worth noting that the 1 mm shell thickness in the putative sail explored in these calculations is already useful for some mission concepts. Solar photons alone can push an aerographite sail of this thickness beyond Solar System escape velocity.

If laboratory work confirms that the shell can be reduced below 1 mm while remaining opaque, we can start talking about on-board technology like scientific instruments and the needed communications devices. We can also start talking about much faster transit times. As mentioned yesterday, Heller et al. find the orbit of Mars reachable within 60 days assuming an aerographite shell of 0.5 mm. That gets you to Pluto in 4.3 years, nicely halving the New Horizons travel time. As you can see, we are getting into interstellar precursor range.

This is done through solar photons alone, without the considerable overhead of the massive laser array assumed by Breakthrough Starshot, with obvious (and enormous) cost savings. Starshot wins on speed, aiming for 20 percent of lightspeed and thus a transit time to Proxima Centauri of about 20 years. But put a 1 μm thin aerographite hollow sphere at 0.04 AU (this is Parker Solar Probe territory) for a close solar pass and you achieve 6900 km/second, which gets you to Proxima Centauri in 185 years, well below the 1,000 year threshold thus far determined for a graphene sail.

How to make a sail out of this material? Anglada-Escudé explained in an email that aerographite:

…has structural integrity (it keeps its shape and recovers over deformation), and it is “relatively” simple to make. Think of it as a foam. You make a template of porous ZnO [zinc oxide], carbon fills in the gaps through a deposition process forming carbon fibres/tubes/sheets, etc. You remove the template material, and you have a block of very light aerographite foam with the shape of the original ZnO template.

The authors discuss hollow spheres as the sail’s shape, but a range of possibilities exist. The spherical shape was chosen for the paper because it provides the simplest solution at this stage of the evaluation of aerographite, but a cone is likewise feasible, and would likely provide stability — I think of this in terms of Jim and Greg Benford’s work on ‘beamriding’ sails, obviously an issue with Breakthrough Starshot.

The today typical ‘flat’ sail is likewise a possibility. The authors have discussed the matter with the Hamburg group behind aerographite, with the latter seeing no problem in manufacturing the material in arbitrary shapes and sizes. Adds Anglada-Escudé:

A spherical shell with a wall of 1 mm is already unbound to the Solar System, but if we could work with a more classic flat (or quasi flat) sail in ‘parachute’ configuration, we could work with up to 4 mm in thickness (which is pretty macroscopic) and add payload easily. I would think that the idea is to start the conversation and let the community evolve it to the most useful application. This is now mission planning, not speculative design! Deploying it would be so cheap… it is almost painful to think about why we have not done it yet.

Or we can get more exotic still, as lead author Heller told me, envisioning separate sail components connected by carbon nanotubes:

The shell (or hollow sphere) design that we focus on is just better than a solid sphere or a cube but not necessarily the optimal shape. I personally think a web of dozens or hundreds of cm-sized cones or parachutes, all of which automatically orient themselves to the solar radiation individually will be a more practical application if it really comes to moving payload through the solar system. Such a web of aerographite parachutes would be more resilient to failure (of one or a few parts) and it would allow larger mass margins for the payload. I wouldn’t pay too much attention to single-shell concepts for real applications, although hollow spheres make the math very simple, which is why we used them for this introductory paper. A web will be better for “large” (gram to kilogram) payloads.

Aerographite gives the appearance of an ideal sail material if it can be used to carry a payload. The authors produce benchmark scenarios showing that the weight of the payload is 1000 times the mass of the transport system, quite a contrast with chemical rockets — think New Horizons and its Atlas V — where the transport system is 1000 times heavier than the payload.

The authors calculate payload mass in terms of shell thickness, using benchmarks of 1 μm and 100 μm, with this result:

These are tiny payloads, which is why the authors consider the aerographite sail in terms of scalability. The notion of a swarm of aerographite spheres connected by carbon nanofibers — “the additional weight of which would be small compared to the mass of the aerographite shell” — implies a combined thrust that would allow larger payloads on the one hand, or faster travel time for a given payload. Payloads could thus be brought into the kg domain if sail sizes in the 100 meter range can be achieved.

One advantage of this concept is that it would aid in tracking the spacecraft, which is itself an issue we need to address. But so is the matter of how a payload is positioned, either attached to the sail itself or, depending on sail shape and configuration, drawn behind it in parachute fashion. This is a problem faced by Breakthrough Starshot as well as it seeks the right sail material and optimum configuration for ‘beam-riding’ with its proposed laser array. The authors do not address the question of payload configuration and attachment in this paper.

Nor are we through with significant issues. How would the aerographite sail behave in space, given its tendency to accumulate electrical charge? Navigation issues immediately arise that we need to talk about tomorrow, and we also have issues regarding aerographite’s tensile strength.

Let’s also talk in the next post about the kind of missions we might want to deploy, assuming a successful research project produces flight-testable sails. Interesting options open up long before we start talking about true interstellar flight, perhaps piggybacking on other missions as we learn both about the material in space as well as the formidable issues of tracking an utterly black sail. More on all this next time.