The Path toward an Aerographite Sail

I’ve focused on aerographite these past several days because sail materials are a significant determinant of the kind of missions we can fly both in the near-term and beyond. The emergence of a new ‘contender’ to join graphene as a leading candidate for deep space missions is worthy of note. Whether or not this ultra lightweight material produced by teams at the Technical University of Hamburg and the University of Kiel lives up to its promise will depend upon a thorough investigation of its properties as adapted for sails, one which has already begun.

Sail materials matter because we have already begun flying spacecraft with these technologies, so that as we climb the learning curve in terms of design and engineering, we need to be thinking about how to increase performance to allow ambitious missions, and perhaps even audacious ones like Breakthrough Starshot, though the authors of the first paper on aerographite for sails are skeptical about whether the material could withstand the demands of the Starshot laser push.

Aerographite seems to allow strikingly fast missions using solar photons alone — the paper discusses reaching Pluto orbit in less than 5 years, for example — but the authors of this paper are fully aware of the number and complexity of the issues that need to be addressed to make such a thing happen. The idea is to advance the concept, bat the ideas around, learn from laboratory experiment, and try this relatively inexpensive material out in space, starting probably with near-term projects on the International Space Station and going from there. 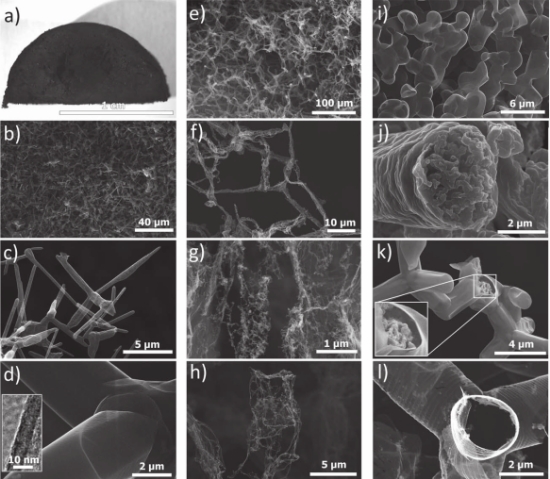 Among the issues I didn’t have time to discuss yesterday is the sail’s absorption of photons from a high-energy beam, like Starshot’s projected ground-based array. An aerographite sail that absorbs solar photons may have trouble under an intense beam, considering that the material melts at 400 C — remember, we are talking about a black sail that works through absorbance rather than reflectivity. 400 C is a figure that the Hamburg team measured under atmospheric conditions — consider it a combustion temperature, as Alex Tolley reminds me, rather than a melting point — so we would still need to learn about the situation in space. This would be a matter of simple experiment but a crucial issue to resolve if we’re interested in beamed sails.

A larger problem emerges with the fact that aerographite is an electrical as well as a heat conductor. That means an aerographite sail will accumulate charge from solar UV radiation or possibly the solar wind, as the paper is quick to note. Launching an aerographite sail from low Earth orbit could result in deflection of the sail’s trajectory by Lorentz forces induced by the Earth’s magnetic field. Interplanetary and interstellar magnetic fields pose a challenge depending on the mission.

Thus we have a navigation issue to investigate, one that would likely need to be resolved, says lead author René Heller (Max Planck Institute for Solar System Research, Göttingen) by an active, autonomous on-board computer “…and some form of photon “wings” or “rudders” to trim the sail.” The effect of charge upon aerographite can be viewed in a video: https://www.youtube.com/watch?v=Oh8skH1oQDE&feature=emb_title.

Heller said in an email discussion that before we start talking about interstellar missions, we need to figure out how to move an aerographite sail in predictable ways:

At this point, we are introducing the basic equations and some sample trajectories to show that interstellar escape is possible in principle. But steering is very complicated. There are so many unknowns that would affect a sail trajectory such as interplanetary magnetic fields (leads to deflection if the sail gets electrically charged, e.g. by cosmic particle hits), the solar wind, interstellar magnetic fields, limited knowledge of the actual position and velocity (“proper motion”) of the target star etc. that I can’t see at this point how one could passively steer an aerographite hollow sphere or cone or parachute web – whatever – to a star at 4 light years. That’s why we entitled our paper an “interstellar precursor”. Even aiming at Mars would be hard with a passive sail, which is why we talk about reaching the orbit of Mars and the orbit of Pluto rather than Mars and Pluto themselves.

Structural reinforcement may turn out to be necessary given the material’s relatively low tensile strength. All of these matters need investigation, but the beauty of aerographite is that it is available for demonstrator work near Earth, as co-author Pierre Kervella adds:

…an interstellar spacecraft would likely be very different from the presented concept. The spherical shell could be a very valuable demonstrator in the vicinity of the Earth. Once we have convincingly shown that interstellar velocities are realistically within reach, it will likely change the research landscape and boost the innovations in ultra-light materials. Aerographite has such remarkable properties, but it was not developed at all for being a solar sail! There is certainly a large margin for improvement through a dedicated research effort.

A black sail presents interesting challenges when we want to track it from Earth. We have an infrared signature to work with that would be compromised by the absorption of atmospheric water vapor, making space-based observation the key. The sail’s effective temperature will drop as it recedes from the Sun, making the wavelength of its peak emission increase. The authors calculate that the James Webb Space Telescope could track such a sail, and demonstrate this by calculating its temperature in thermal equilibrium with absorbed sunlight.

The result: JWST observations of an aerographite sail of 1 m radius are possible out to 2 AU. A sail 10 m in radius can be observed to 3 AU. But we have other options as we move into the outer Solar System. A swarm configuration of sails as discussed yesterday could, the authors believe, be tracked in deep space by ALMA (the Atacama Large Millimeter/submillimeter Array) at distances of 1000 AU and beyond as the sail’s temperature drops to 10 K.

We’re hoping, of course, for a communicative spacecraft, one relying on ultra lightweight instrumentation. Ideally we would want to implement a laser on-board to remain in contact with Earth. From the paper:

Miniaturization of electronic components has made great progress in the last few decades, but we focus on mass margins above 1 g because we do not expect sub-gram margins to be relevant for the foreseeable future. Commercial lithium-ion batteries weighing a few grams and with power densities > 1 kW kg−1 (Duduta et al. 2018) as well as ultra-high-energy density supercapacitors with power densities of ∼32 kW kg−1 (Rani et al. 2019) are already available, allowing energy emission of a gram-sized power source of 32 W in theory.

A laser sending the proper time of the sail to Earth would allow distance and speed measurements through the relativistic Doppler effect. Measurements of gravitational perturbations (Christian & Loeb 2017; Witten 2020) under consideration of dust and gas drag as well as magnetic forces exerted from the interstellar medium (Hoang & Loeb 2020) could also be used to search for the suspected Planet Nine in the outskirts of the solar system. Its expected orbital semimajor axis is between about 380 AU and 980 AU (Batygin & Brown 2016; Brown & Batygin 2016).

An interesting thought! René Heller mentioned this as well in an email, talking about the prospect of hundreds or thousands of aerographite sails, each with a gram-sized on-board transmitter to allow tracking of distance and speed relative to Earth. A reconstruction of their individual trajectories could be used to look for gravitational perturbations leading to the putative Planet Nine. Remember, this is a low-cost material. The authors estimate that meter-sized aerographite spheres with a thickness in the μm range could be produced in large numbers for roughly $1000 US. Breakthrough Starshot is using a per-sail cost estimate of $100 US.

Let’s look long-range again and consider an interstellar implication. If aerographite did allow a mission to, say, Proxima Centauri with a travel time of less than 200 years, would there be any way to decelerate it upon arrival? Obviously we could brake against the star’s light, but the problem with Proxima is that its light is relatively weak, and deceleration would be negligible. Heller and Hippke have in the past considered using Centauri A and B as buffers for deceleration, with the residual kinetic energy absorbed by Proxima Centauri itself (see By ‘Photogravitational Assists’ to Proxima b).

But I’m getting way out in front in going this route. What we need now is something we can deploy in the near-term, and here it’s conceivable that aerographite may become valuable even for a laser-beaming project like Breakthrough Starshot. From co-author Guillem Anglada-Escudé (Institut de Ciencies Espacials, Barcelona):

…we are aiming at something we can deploy immediately, at a low budget. As you know, space is very slow in demonstrating technology. But most unknowns can be sorted out if we can make it fly instead of theorising about it for two decades. That’s the spirit. All knowledge on operating sails is of high value anyway. The micro-instrumentation that Starshot needs can be installed, tested and begin producing science with these sails on Solar System exploration for example.

A rousing prospect, that. An early hollow sphere aerographite demonstrator with a diameter in the range of a few meters might be brought into space as a piggyback add-on to an existing interplanetary mission, adding little mass given the lightweight nature of the material. Add to the low cost of aerographite itself the fact that deep space missions, conceivably interstellar ones, can be implemented using solar photons alone, without the need for a massive laser installation and all the issues ground-based laser beaming introduces, and the economic justification for pursuing this research becomes obvious.

Moving a small sample of aerographite with light in the laboratory is the next step in the research, a set of experiments now being devised. Breakthrough Starshot should be keeping an eye on this research.