A Tight Fit: Planets in the Habitable Zone

How many habitable planets should we expect in the average stellar system? One sounds like a good number to me, even an optimistic one. But it’s a tough question because we don’t exactly know what an ‘average’ stellar system is, there being such a wide range currently being discovered.

There was a time less than a century ago when the idea that there might be three habitable planets — i.e., habitable by humans — in the Solar System was current. Imagine Venus as something like French Polynesia, or maybe what was then the Belgian Congo. Imagine Mars with a thicker atmosphere and ancient seas, Edgar Rice Burroughs territory.

Today we think of multiple habitability here in the Solar System as perhaps including ocean life under the ice of the moons of giant planets, but we’ve ruled out anything a human could walk around on in relative comfort. The question of what makes our Solar System able to support just one planet in the human habitability range bothered Stephen Kane (UC-Riverside) because of examples like the seven planets around TRAPPIST-1, three of which seem to be in that planet’s liquid water habitable zone. Why so many? Why so few around our own star? 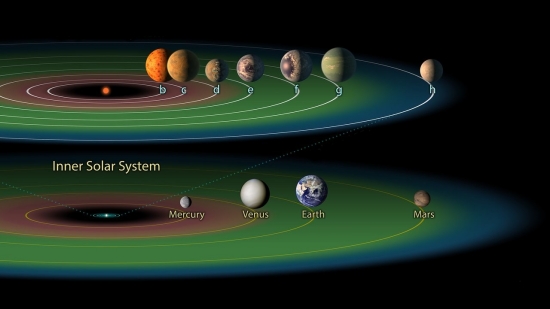 Image: The Trappist-1 planetary system has three planets in its habitable zone, compared to our Solar System, which has only one. (NASA/JPL/Caltech).

Out of such speculations came a way to analyze the question. Kane and team simulated gravitational interactions as planets at various distances from each other orbited their stars for millions of years. The upshot is that according to these calculations, a star like the Sun could support as many as six planets in liquid water habitable zone orbits. The fact that we do not see anything like this may just be the result of Jupiter and its ability to disrupt orbits because of its mass. Another needed trait of habitable zone planets: Their orbits need to be circular.

To examine these matters further, Kane has taken particular interest in Beta Canum Venaticorum (Beta CVn), a scant 27 light years away in the northern constellation Canes Venatici. This is a G-class star a bit more metal-poor than the Sun, although in most other respects it stands as a pretty fair double to our star in terms of mass and age. Maggie Turnbull (SETI Institute), a co-author on this paper, singled Beta CVn out as long as 12 years ago as one of the stars of possible astrobiological interest within 10 parsecs.

No planets are currently known here, but the very fact that there is no attendant gas giant makes Kane interested in looking for multiple smaller worlds. This is a nearby star that may yield transit results, based on the probabilities Kane calculates, and it offers the opportunity to test habitable zone packing scenarios. Finding nearby G-class stars without gas giants can be a profitable way to assess planetary orbital architectures, and to weigh how common our own Solar System’s might be:

Even though giant planets are more common around solar analogs than later-type stars (Zechmeister et al. 2013; Wittenmyer et al. 2016), they are still relatively rare, with an average occurrence rate of 6.7% beyond orbital periods of 300 days (Wittenmyer et al. 2020). Consequently, the solar system may not be representative of orbital architectures, and it is useful to directly compare with another nearby solar-type star, such as Beta CVn.

The paper presents 20 years of radial velocity data on Beta CVn from HIRES (Keck/High Resolution Echelle Spectrometer) as well as the Automated Planet Finder (APF) instrument, ruling out planets more massive than Saturn anywhere within 10 AU of the star. The potential packing given orbital dynamics around this star — numerous terrestrial-class worlds could exist here — show that relatively nearby targets like Beta CVn may also be interesting for space-based direct imaging missions of the future like HabEx and LUVOIR, as we begin to drill down toward smaller worlds in hopes of eventually characterizing their atmospheres.

Thus far we have primarily studied low-mass stars with transiting planets, which has revealed the phenomenon of compact, tightly packed systems. The paper goes on:

Some of these systems, such as TRAPPIST-1, have been found to have multiple terrestrial planets in the HZ, causing speculation as to whether such dynamical packing in the HZ is normal or rare. Our analysis presented here demonstrates that in fact the dynamical limitations to the packing of HZ terrestrial planets is ∼5 planets for most spectral types, and ∼6 planets for stellar masses ≳ 0.7M⊙. Packing 7 planets in the HZ is possible within certain specific stellar mass and architecture regimes, but becomes vulnerable to MMR [mean motion resonance] perturbations that compromise the dynamical stability of such configurations. The 20 years of RV data for Beta CVn presented here rule out a large range of giant planet masses and orbital parameters, providing an excellent candidate for complex terrestrial architectures.

A few thoughts on earlier work:

Highly packed stellar systems like TRAPPIST-1 also caught the attention of Alysa Obertas (University of Toronto). Obertas tackled the question in 2016, but a key unknown remained whether or not there is enough mass in the planet-forming disk to produce systems packed up to the limits allowed by computer simulations. The resulting paper looked at simulations involving up to 10 billion orbits, focusing largely on M-dwarf stars, of which TRAPPIST-1 is an example. “Applying the outcomes of our simulations, we show that isolated systems of up to five Earth-mass planets can fit in the habitable zone of a Sun-like star without close encounters for at least 109 orbits,” said the paper, making orbital stability unproblematic.

We’ve also talked about the implications of tightly orbiting planets in terms of astrobiology. 1530 light years away in Cygnus, Kepler-36 is orbited by a ‘super-Earth’ and a ‘mini-Neptune’ in orbits that differ by 0.013 AU, producing transit timing variations for both planets. Here we have a 7:6 orbital resonance, and presumably spectacular views from the molten surface of the super-Earth as the larger planet moves across its sky.

The system inspired work by Jason Steffen (UNLV) and Gongjie Li (Harvard-Smithsonian Center for Astrophysics), who extended it into speculations on the transmission of life between close planets in habitable zones. For that one, see Habitable Planets in the Same System.

Image: A gas giant planet spanning three times more sky than the Moon as seen from the Earth looms over the molten landscape of Kepler-36b. Credit: Harvard-Smithsonian Center for Astrophysics.

Next post: Saturn-class Exoplanet Is a Win for Astrometry