Saturn-class Exoplanet Is a Win for Astrometry

Under other circumstances, the red dwarf TVLM 513–46546 would not cause a ripple in news coverage of exoplanets. What astronomers have found there is a planet of Saturn mass in a 221 day orbit, raising eyebrows only in that while planets are common around M-dwarfs, they are usually smaller, rocky worlds. But the TVLM 513–46546 story gains weight when we consider the methods used to find this planet, which have implications for studying system architectures around many stars as we refine our techniques and new instruments come online.

The star in question is 35 light years from Earth, and we’ve found the planet through astrometry, a method that tracks a star’s position in the sky to an extreme precision and detects the minute variation in motion caused by the gravitational effect of the planet. If this sounds a bit like radial velocity methods, the difference is that with astrometry we are measuring tiny changes in the stars position in the sky, as opposed to the Doppler shift of light from a star as it moves towards us and then away from us, influenced by the gravitational tug of a planet. 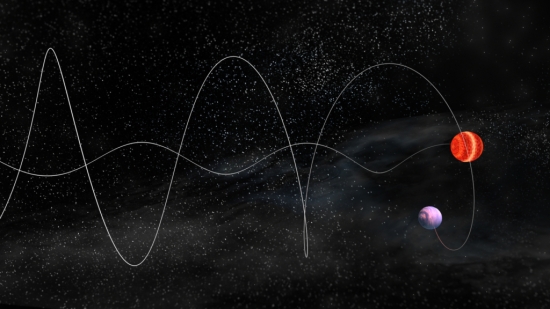 Image: Illustration shows how the star’s motion around the center of mass between it and the planet causes a “wobble” in its motion through space. The VLBA’s ability to detect this minuscule effect revealed the presence of the planet. Credit: Bill Saxton, NRAO/AUI/NSF.

The two methods complement each other in the sense that they are sensitive to planets in different kinds of orbits. Radial velocity works most readily with planets orbiting close to their star, where the gravitational effects are most apparent in the Doppler signature. The great challenge for radial velocity is increasing its sensitivity to smaller planets at progressively larger distances from the star, work that is proceeding through new spectrographs like ESPRESSO.

Astrometry, on the other hand, is more sensitive to massive planets that are distant from their star. This is useful indeed, for while radial velocity can’t yet track such worlds, neither can transit methods, or to put it more precisely, a distant orbit involving, say, 10 years would require such long observing periods to confirm that we would be unlikely to register such transits more than once. If astrometry can be made to work, we have a method for finding planets whose position in their stellar system is more like that of Saturn or Jupiter in our own. Thus astrometry finds the kind of planet hitherto accessible only through gravitational microlensing or direct imaging. 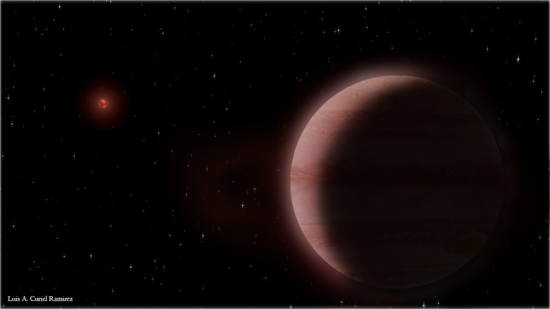 Image: Illustration of the planetary system TVLM 513–46546; the newly discovered Saturn-like planet is seen in front of its host star, a small and cool red dwarf. Credit: © Luis A. Curiel Ramirez.

Which makes the planet around TVLM 513–46546 a bit odd, in that it is relatively low in mass given the demands of astrometry. Salvador Curiel (National Autonomous University of Mexico) is lead author of the paper on this work, which appears in the Astronomical Journal:

“Giant planets, like Jupiter and Saturn, are expected to be rare around small stars like this one, and the astrometric technique is best at finding Jupiter-like planets in wide orbits, so we were surprised to find a lower mass, Saturn-like planet in a relatively compact orbit. We expected to find a more massive planet, similar to Jupiter, in a wider orbit. Detecting the orbital motions of this sub-Jupiter mass planetary companion in such a compact orbit was a great challenge.”

This is a rare win for astrometry, which has been considered since the 19th Century as a way of finding planets around other stars. Indeed, it was astrometrical data that convinced Peter van de Kamp that Barnard’s Star had one or more planets. The astronomer had been analyzing data from the Sproul Observatory at Swarthmore College for decades, but it was later learned that systematic errors in the calibration of the telescope had produced the apparent effect.

As you might expect, the tiny variation in stellar position caused by even a large gas giant is extremely tricky to measure. We can thank the antennae at the Very Long Baseline Array for the TVLM 513–46546 catch, which becomes the first discovery of an exoplanet with a radio telescope using astrometric techniques, and in fact only the second exoplanet discovery for both radio telescopes and astrometry itself. The only other exoplanet discovered using astrometry is HD 176051 b, associated with a relatively nearby (roughly 48 light years) binary system.

In addition to future work at the VLBI, the authors note that astrometric observations from Gaia “have the potential to detect many (probably thousands) exoplanets and brown dwarfs associated with solar-type and low-mass stars.” 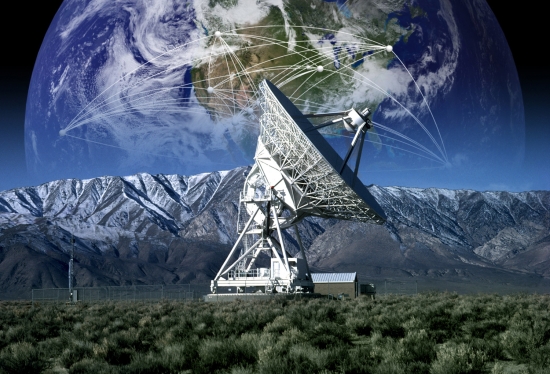 Image: The Very Long Baseline Array is a continent-wide radio telescope system spanning the distance from Hawaii in the Pacific to St. Croix in the Caribbean. It provides astronomers with extremely high resolving power, the ability to see fine detail. Credit: J. Hellermann, NRAO/AUI/NSF.

Previous post: A Tight Fit: Planets in the Habitable Zone