The exoplanet K2-25b, a young world in the Hyades cluster orbiting an M-dwarf star, raises intriguing questions. We’d like to know how it formed, for K2-25b is much more dense than we would expect for a world slightly smaller than Neptune. Planets in a range between Earth and Neptune seem to be common around other stars, although we have none in our Solar System unless we make an interesting discovery about putative Planet 9.

“The planet is dense for its size and age, in contrast to other young, sub-Neptune-sized planets that orbit close to their host star. Usually these worlds are observed to have low densities — and some even have extended evaporating atmospheres. K2-25b, with the measurements in hand, seems to have a dense core, either rocky or water-rich, with a thin envelope.” 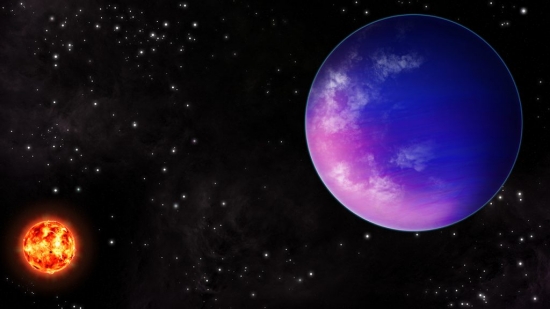 Image: New detailed observations with NSF’s NOIRLab facilities reveal a young exoplanet, orbiting a young star in the Hyades cluster, that is unusually dense for its size and age. Slightly smaller than Neptune, K2-25b orbits an M-dwarf star — the most common type of star in the galaxy — in 3.5 days. Credit: NOIRLab/NSF/AURA/J. Pollard.

Let’s put this world into the context of giant planet formation because of its unusual density. A widely studied scenario would have gas giants forming through the accretion of disk materials into a core of ice and rock some 5 to 10 times the mass of Earth. A massive gas envelope hundreds of times the mass of Earth is then drawn in through gravitational interaction with the still young disk. K2-25b’s mass — some 25 times that of Earth, and thus possessed of robust gravitational pull — has emerged without accumulating more than a tenuous gas envelope.

This planet is a Kepler discovery and a world producing a large transit depth, one mentioned in the literature as a candidate for atmospheric characterization by the James Webb Space Telescope. Particularly useful is the fact that its mass, radius and even the tilt of its orbit have been determined with the help of the Habitable-zone Planet Finder (HPF), a spectrograph out of Penn State installed on the 10-meter Hobby-Eberly Telescope at McDonald Observatory in Texas.

The size measurement was tightened with observations at Kitt Peak’s WIYN 0.9-meter telescope and the 3.5-meter telescope at Apache Point Observatory in New Mexico. I mention both because Stefánsson subjected their data to an engineered diffuser, a beam shaper that effectively spreads the light from the star to allow more accurate measurements of the planetary transit. This in turn allows transit prediction for K2-25b to be reduced from a window of 30-40 minutes to 20 seconds in a technique Stefánsson developed in his doctoral thesis.

Here you may remember Stefánsson’s name in connection with the exoplanet G 9-40b, where he used diffuser-assisted photometry at Apache Point to tighten transit timing (see G 9-40b: Confirming a Planet Candidate). Tightening the shape of the transit can be invaluable, says Jayadev Rajagopal (National Optical-Infrared Astronomy Research Laboratory), a co-author of the paper:

“The innovative diffuser allowed us to better define the shape of the transit and thereby further constrain the size, density and composition of the planet. Smaller aperture telescopes, when equipped with state-of-the-art, but inexpensive, equipment can be platforms for high impact science programs. Very accurate photometry will be in demand for exploring host stars and planets in tandem with space missions and larger apertures from the ground, and this is an illustration of the role that a modest-sized 0.9-meter telescope can play in that effort.”

The authors of the paper on this work consider K2-25b to be a ‘useful laboratory’ for examining planet formation. If so, it’s a laboratory with unexplained secrets. Why didn’t K2-25b experience runaway gas accretion to produce a gas giant? The paper offers one possible solution:

…we surmise that K2-25b could be the product of planet merging events of smaller planetary cores to produce a more massive planet. Such a dynamical environment could have excited K2-25b into an eccentric orbit, and K2-25b could be in the process of migrating to a shorter period orbit through tidal interactions with the host star. To explain K2-25b’s current moderate eccentricity from tidal circularization theory, we place a lower limit on the tidal quality factor of Qtp ∼ 105, corresponding to a circularization timescale consistent with the age of the system. This tidal quality factor is higher than the tidal quality factor for Neptune, which suggest that K2-25b’s internal structure could be different than that of the small gas-giants (Uranus, Neptune) in the Solar System. 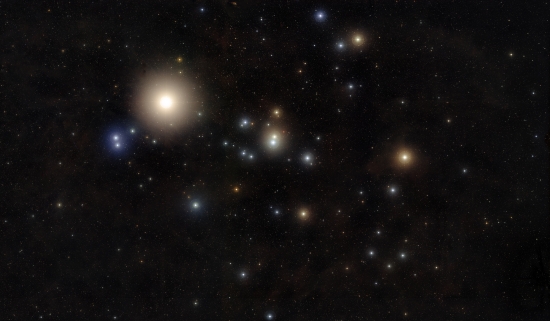 Follow-up observations will include transit spectroscopy on data from the Transiting Exoplanet Survey Satellite (TESS) mission, whose target list includes K2-25b. Also useful will be NEID, an extreme precision radial velocity spectrometer installed at Kitt Peak’s WIYN telescope. A pertinent astronomical reference is TOI 849b, a possible exposed planetary core — see An Exposed Planetary Core at TOI-849 for more on this one and its similar issues re planet formation.

The paper is Stefánsson et al., “The Habitable-zone Planet Finder Reveals A High Mass and a Low Obliquity for the Young Neptune K2-25b,” accepted at the Astronomical Journal (preprint).

Next post: Lunar Eclipse: A Proxy for Exoplanet Observation

Previous post: Saturn-class Exoplanet Is a Win for Astrometry