When it comes to detecting life on planets around other stars, my guess is that what will initially appear to be a life signature will quickly become controversial. We might, for example, find ozone in an exoplanet atmosphere with a space telescope like HabEX (Habitable Exoplanet Observatory). That would lead to hyperbolic news stories, to be sure, but ozone can happen when nitrogen and oxygen are exposed to ultraviolet light. The presence of ozone makes no definitive statement about life.

In fact, definitive statements about life may take more than a few decades to achieve. If ozone seems like a good catch, that’s because it implies oxygen, which makes us think of photosynthesis, but oxygen itself is hardly infallible as a biosignature. Oxygen-rich atmospheres can be completely abiotic, with UV from the host star breaking down carbon dioxide. For that matter, an atmosphere rich in water vapor can produce oxygen and hydrogen through the effects of UV radiation.

Better, then, to look for a mix of things. Methane and oxygen detected simultaneously would be interesting because the two would need constant replenishment to appear together, indicating a lack of chemical equilibrium, and surely that’s a life signature. Or is it? Volcanoes can produce methane [although see Brig Klyce’s comment below], and so can infalling carbon-rich debris entering an atmosphere.

No, given the significance of the find and the difficulties in the measurement, I don’t expect anything but ambiguity when we do get the right instrumentation to study terrestrial-class worlds transiting their stars. We’ll be looking at starlight screened through a thin layer of atmosphere, and I thInk we can expect a battle royal among astronomers as we try to decide among the possible causes of the chemical signatures we do find.

And then there’s the question of just where a particular planet is in its development. Our planet when young was rich in hydrogen and helium, but later volcanic eruptions would supply carbon dioxide, water vapor, sulphur. No oxygen, yet, but if we find these signatures in an exoplanet atmosphere, we may be looking at a world that will one day experience an oxygenation event like the one that changed everything on Earth two and a half billion years ago.

How tricky atmospheric biosignatures turn out to be. All this gets more complicated still because of the fact that we need an observing campaign at different wavelengths to make a detection of the different gases involved.

But ozone seems like a logical place to start. Giada Arney (NASA GSFC) is co-author of a paper that addresses biosignatures in a more local way, as I’ll explain after her quote:

“Astronomers will also have to take the developmental stage of the planet into account when looking at younger stars with young planets. If you wanted to detect oxygen or ozone from a planet similar to the early Earth, when there was less oxygen in our atmosphere, the spectral features in optical and infrared light aren’t strong enough. We think Earth had low concentrations of ozone before the mid-Proterozoic geological period (between roughly 2.0 billion to 0.7 billion years ago) when photosynthesis contributed to the build up of oxygen and ozone in the atmosphere to the levels we see today. But because the ultraviolet-light signature of ozone features is very strong, you would have a hope of detecting small amounts of ozone. The ultraviolet may therefore be the best wavelength for detecting photosynthetic life on low-oxygen exoplanets.”

Arney, working with Allison Youngblood (Laboratory for Atmospheric and Space Physics, University of Colorado, Boulder) and colleagues, has explored ozone detection close at hand through new Hubble observations. The idea here is to use light reflected off the Moon during a lunar eclipse to try to detect biosignatures in Earth’s own atmosphere. Consider it a test case for the kind of atmospheric characterization we hope to be doing with much more distant worlds in coming decades. Have a look at how things lined up for this observation. 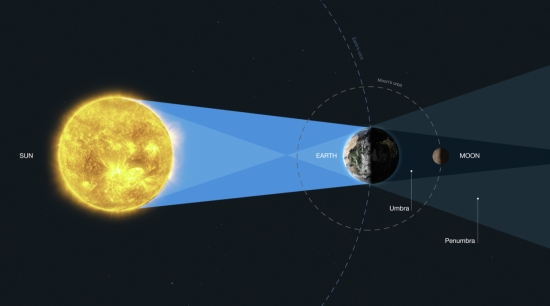 Image: This diagram explains the geometry of the lunar eclipse. When the Moon is entirely in the Earth’s umbra (known as a total lunar eclipse or umbral eclipse), all sunlight reaching the lunar surface has been refracted or scattered through Earth’s atmosphere. When the Moon is in Earth’s penumbra (known as a penumbral eclipse), illumination comes from both direct sunlight and sunlight refracted and scattered through the planet’s atmosphere. This process is similar to an exoplanet transit observation. Credit: M. Kornmesser (ESA/Hubble), NASA, and ESA.

As you can see, the Moon is reflecting sunlight that has passed through Earth’s atmosphere before being reflected back to Hubble. Make no mistake, we’ve done this kind of thing before — Earthshine has its uses — but this is the first time a total lunar eclipse has been captured at ultraviolet wavelengths and from a space telescope, so it’s a decent proxy for what we’ll do later with HabEX and other instruments. Hubble found a strong ozone signature, a photochemical byproduct of molecular oxygen we’ll hope to be finding on rocky exoplanets.

The strength of the ozone signature demonstrates the problem with working with ground-based observations at these wavelengths, for Earth’s atmosphere absorbs ultraviolet light. This work, along with other observations — ground-based but at different wavelengths — of the January 20-21, 2019 lunar eclipse, helps to develop spectral models for atmospheric characterization. The weakness of the lunar eclipse as a proxy is also clear, as the paper notes:

…observing the moon with HST has different challenges, namely lower spectral resolution and pointing instability. The moon is not a homogeneous surface, and pointing instability does not guarantee that the overall albedo and reflectivity spectrum of the lunar surfaces observed in-transit and out-of-transit are identical. Creating transmission spectra with only Earth’s spectral signatures relies on the in-transit and out-of-transit solar and lunar features being identical. We find evidence for overall albedo variations of the moon between our out-of-eclipse spectra, but defer a thorough analysis to a future paper.

This, too, is helpful, though, for previous papers in the literature have analyzed problems of refraction and transit geometries as they affect the exoplanet spectroscopic signature. The models for future work are only now being tested through events like these. 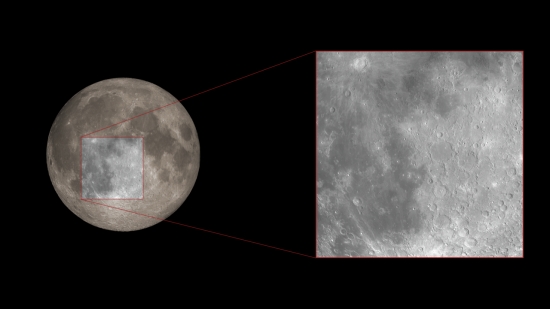 Image: This ground-based telescopic image of the Moon highlights the general region where astronomers used NASA’s Hubble Space Telescope to measure the amount of ozone in Earth’s atmosphere. This method serves as a proxy for how they will observe Earth-like planets around other stars in search of life. Credit: M. Kornmesser (ESA/Hubble), NASA, and ESA.