Ceres: The Lesson of Occator Crater

We learned some time ago from the Dawn mission just how interesting a place Ceres is. If you’re wanting to dig into the latest research on the dwarf planet, as it is now termed, be aware that a collection of papers has appeared in Nature Astronomy, Nature Geoscience and Nature Communications, all published on August 10. These analyze data gathered during Dawn’s second extended mission (XM2) phase, which closed with a series of low orbits as close as 35 kilometers from the surface. Rather than listing these papers separately, I’ll just offer this link to the entire collection at nature.com.

The upshot is that we’re continuing to learn about a small world that remains surprisingly active. Let’s home in on cryovolcanism, which leverages the temperature differential between a frozen world’s interior water and its frigid surface to produce ejections. These are becoming almost common — think Enceladus, for example, and then remember what Voyager saw at Triton. The thinking has been that some kind of cryovolcanism makes sense in the outer Solar System because the gas and ice giants place gravitational stresses on their moons that warm their interior.

But Ceres? Not only is it the only dwarf planet inside Neptune’s orbit, but it’s also the largest of the main belt asteroids. You would think that orbits between Mars and Jupiter, which are obviously not associated with the tidal forces of a closely orbited gas giant, would produce inactive bodies. The Dawn data and the papers it has spawned indicate otherwise. Dawn, studying Ceres from 2015 to 2018, shows us a world of 950 kilometers diameter that is active and possessed of its own form of cryovolcanism. At the core of these studies is Occator Crater, about 92 kilometers in diameter and possessed of a remarkably bright, white coloration.

The evidence of Occator Crater argues for the remains of a global, salty ocean, a briny mixture that remains liquid and may still be escaping from the interior. We know that the European Space Agency’s Herschel Space Observatory produced evidence of a sporadic exosphere, thin but containing water. A thin haze was spotted during the Dawn mission over Occator Crater, though only intermittently, and apparently young deposits of salt compounds containing water turn up in analysis of the Dawn spectrometer data, as presented in a paper from the Dawn spectrometer team led by the Istituto di Astrofisica Spaziale e Fisica Cosmica in Italy.

“We assume that Ceres is still occasionally cryovolcanically active,” says Andreas Nathues (Max Planck Institute for Solar System Research, Germany), who led a team evaluating high-resolution imagery of Ceres during the final phase of the Dawn mission. Indeed, the bright white coloration found at Occator Crater was picked up during the approach to Ceres, and yielded to subsequent analysis. “On closer inspection, Occator Crater has a very complex structure with elevations, a large central depression, deposits, cracks, and furrows,” Nathues continues. “In all its details, this became clear only during the final phase of the mission.”

Without a source of internal heating, the deep dive into Occator Crater found in the new papers tells us that this is nonetheless a world rich in water, one containing a brine reservoir believed to be about 40 kilometers deep and several hundred kilometers in width. This would explain Occator’s bright areas, which are found to be deposits made largely of sodium carbonate that would have moved up to the surface only to evaporate, leaving the reflective salt crust behind. It’s the deep reservoir of brine found by studying Ceres’ gravity that helps us parse its interior structure. Significantly, crustal density here increases with depth well beyond the effects of pressure. 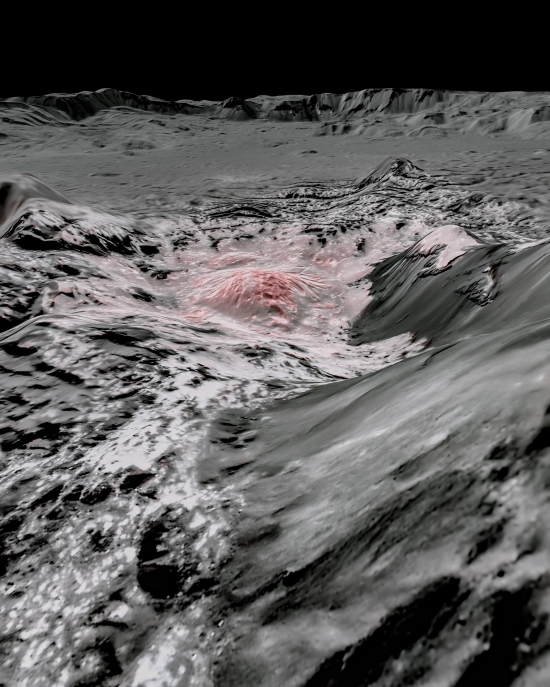 Image; NASA’s Dawn spacecraft captured pictures in visible and infrared wavelengths, which were combined to create this false-color view of a region in 92-kilometer-wide Occator Crater on the dwarf planet Ceres (in the main asteroid belt between Mars and Jupiter). Here, recently exposed brine, or salty liquids, in the center of the crater were pushed up from a deep reservoir below Ceres’ crust. In this view, they appear reddish. In the foreground is Cerealia Facula (“facula” means bright area), a 15-kilometer-wide region with a composition dominated by salts. The central dome, Cerealia Tholus, is about 3 kilometers across at its base and 340 meters tall. The dome is inside a central depression about 900 meters deep. Credit: NASA/JPL-Caltech/UCLA/MPS/DLR/IDA.

As Dawn examined the surface from a range of altitudes, it captured images of two areas within Occator Crater — Cerealia Facula and Vinalia Faculae — whose very brightness was unusual, an indication that they were youthful enough not to be darkened by micrometeorite debris. Subsequent research analyzed in this collection has shown that these faculae (bright areas) are less than 2 million years old. Moreover, the salt compounds of Cerealia Facula — sodium chloride bound with water and ammonium chloride — reached the surface only recently.

“For the large deposit at Cerealia Facula, the bulk of the salts were supplied from a slushy area just beneath the surface that was melted by the heat of the impact that formed the crater about 20 million years ago,” said Dawn Principal Investigator Carol Raymond. “The impact heat subsided after a few million years; however, the impact also created large fractures that could reach the deep, long-lived reservoir, allowing brine to continue percolating to the surface.”

So we have two paths that allow liquids to reach the surface. Again, this is happening in the absence of gravitational interactions with planets, an indication that if Ceres is active, so too may be other ice-rich bodies in the outer Solar System. Small conical hills on Ceres analyzed in this work are another avenue showing the effect of frozen groundwater. 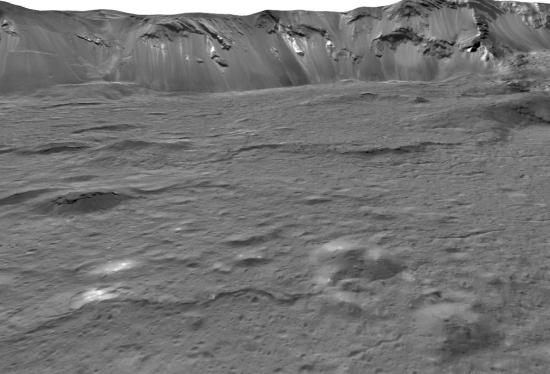 Image; This mosaic of Ceres’ Occator Crater is composed of images NASA’s Dawn mission captured on its second extended mission, in 2018. Bright pits and mounds (foreground) were formed by salty liquid released as Occator’s water-rich floor froze after the crater-forming impact about 20 million years ago. Credit: NASA/JPL-Caltech/UCLA/MPS/DLR/IDA/USRA/LPI.

So we have brine from below the surface pushed upward, the water evaporating, and bright salty deposits left behind, with the remains of a once global ocean surviving and producing a form of cryovolcanism that is most likely still ongoing. The impact that formed Occator Crater occurred perhaps 22 million years ago, with the subsequent subsiding of the inner part of the crater resulting from the loss of material from the interior.

But what stands out in these papers is that brine continued to reach the surface for millions of years afterwards, and may be part of a process that still occurs, as opposed to being the result of a one-time event caused by meltwater from the initial impact. Another dwarf planet turns out to be surprisingly active, as the once enigmatic Occator Crater demonstrates.