The first laboratory work on pushing a space sail with microwaves was performed by Jim and Greg Benford at the Jet Propulsion Laboratory back in 1999, with the results presented the following year at a European conference. Leik Myrabo (then at Rensselaer Polytechnic Institute) was, at about the same time, performing experiments with lasers at Wright-Patterson Air Force Base in Ohio. When you think about the problems of laboratory work on these matters, consider the fact of gravity, meaning that you are working in a 1 g gravity well with diaphanous materials whose acceleration depends on how hot you can allow them to become.

Advances in materials and in particular in lightweight carbon structures allowed the Benfords’ experiments to succeed, with the help of a 10-kilowatt microwave beam that produced significant acceleration on the test object. But I’m reminded by looking at a new paper on sail technologies using no beam at all that the Benfords also demonstrated something else. Molecules of CO2, hydrocarbons and hydrogen that had been incorporated in the lattice of their material at manufacture emerged under the high temperatures involved. Thus another form of acceleration came into play through the phenomenon called desorption.

Just how useful an effect may desorption turn out to be? It seems to offer an acceleration dividend. Roman Kezerashvili (City University of New York), working with colleagues at Samara National Research University in Russia and the State University of New York at Buffalo, has now analyzed the effect of desorption on an inflated, torus-shaped sail. I had the pleasure of talking with Dr. Kezerashvili in Italy at the Aosta conference in 2009, where he discussed relativistic effects that have to be taken into account in the navigation of a space sail close to the Sun. The current work follows up an earlier paper on desorption he presented in 2016.

We have the prospect of incorporating compounds into a sail that become a kind of propulsive shell that is triggered either by microwave beam or, in the case of a close Solar pass, by the Sun itself. Think of desorption as involving a kind of propulsive ‘paint.’ In terms of beaming, it is necessary to understand that desorption can take place under either microwave or laser beam, but microwaves do not damage sail materials and so heat them far less destructively. The Benfords’ work, as Kezerashvili points out, shows that microwave beaming produces more efficient absorption in the sail’s coating materials, and high specific impulse can result from desorption.

In fact, in the Benford experiments on ultra-light carbon sails, photon pressure can account for no more than 30 percent of the observed acceleration. The rest comes from desorption.

Various materials can undergo desorption at different temperatures — the sail analyzed by Kezerashvili in 2016 uses carbon, whose properties of acceleration are there analyzed. If low mass atoms or molecules can be blown out of the sail lattice at known temperatures, the mission concept Kezerashvili suggested in that 2016 paper can emerge, one in which the sail reaches desorption temperature at a particular point in a close pass around the Sun. In this scenario, no microwave or laser beam is needed:

As far as I know, this new paper is the first analysis of desorption on an inflatable sail, but inflatable structures have a long history due to their flexibility and low volume at launch. Among the earliest inflatables to be used in space were the Echo balloons launched in the 1960s, but inflatable structures have been developed extensively in the decades since. I’ve written in the past on a hydrogen-inflated sail using a molybdenum reflector that became the basis for an early orbiting radio telescope design, a concept Greg Matloff extended and investigated along with Kezerashvili and Italian physicist Giancarlo Genta for interstellar flight purposes.

This is also the first paper that considers thermal desorption in the context of solar heating alone, which leads to an interesting class of ‘sundiver’ missions with close solar passes. Thus a conventional solar sail coated with desorptive paint is heated by the space environment. 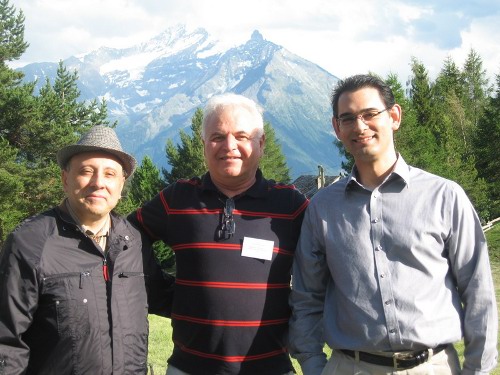 Image: From the Aosta conference of 2009, a fine memory: A snapshot taken in the Italian Alps. Left to right: Giovanni Vulpetti, Roman Kezerashvili, and Justin Vazquez-Poritz.

On deployment matters: Most solar and beamed sails discussed in the literature assume systems of electromagnetic actuation devices, often involving guide rollers and booms. All of this, of course, adds to the mass of the resulting structure as well as its complexity. Deployment through a series of inflatable booms, as assumed in the inflatable sail concept, simplifies an otherwise intricate procedure. The paper also mentions the advances in flexible polymers and high-strength fibers that allow more mass packed into the launch vehicle at lower cost.

So inflatable sails make sense. The new Kezerashvili paper looks at the dynamics of an inflatable sail, conceived as “a thin reflective membrane attached to an inflatable torus-shaped rim.” The round, flat membrane is coated with heat sensitive materials that make the transition from solid state to gas. Pressure introduced into the rim allows sail deployment from the initial stowed configuration, with deployment occurring at the chosen heliocentric distance.

At this point the sail membrane is extended into its final flat shape, with thermal desorption occurring at a specific temperature. For the purposes of these calculations, the authors cite an acceleration time for the torus-shaped solar sail due to thermal desorption of about 1500 seconds, with the mass of the coating material pegged at 1.5 kg and a desorption rate of 1 g/s.

Image: This is Figure 1 from the paper. Credit: Kezerashvili et al.

And here is a figure from one of Dr. Kezerashvili’s presentations on the inflated sail. 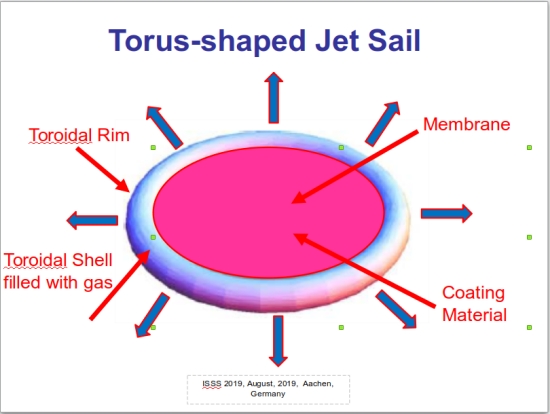 Thus we wind up with two types of acceleration at perihelion, the first being the expected solar radiation pressure, the second being that caused by thermal desorption from the sail itself. The authors assume a beryllium-coated solar sail and analyze the membrane mass of the sail as well as the toroidal rim and coating material, along with the desorption rate, under varying molecular hydrogen gas fills and a temperature range varying with the perihelion approach considered. The different gas fills change the tensile stress on the sail membrane. The paper analyzes the structural strength required in the inflatable torus to support the circular membrane of the sail and considers the deflection of the membrane due to acceleration.

A ‘sundiver’ maneuver is a mission scenario we’ve discussed often in these pages — only this one occurs with an inflatable sail, and it is a mission in which the sail is deployed just as the appropriate temperature is reached. The additional kick provided by desorption produces a substantial boost in performance over a sail driven by solar radiation alone:

The present study reveals that the inflation deployed torus-shaped solar sail accelerated via thermal desorption of coating results in high post-perihelion heliocentric solar sail velocities. With the speed 20–40 AU/year, post-perihelion travel times to the vicinity of Kuiper Belt Objects (KBO) will be less than 1-3 years, while the Sun’s gravity focus at 547 AU can be reached in 13-25 years.

What interested me in particular was the idea of extending the concept into small sails and opting for a ‘fleet’ concept:

The suggested configuration of the torus-shaped solar sail fits the cube-scale size configurations. Recent research reveals that much smaller sails could be incorporated with highly miniaturized chip-scale spacecraft. It is quite possible that a single dedicated interplanetary ‘‘bus” could deploy many cube-scale sails at perihelion. Sequential deployment of a fleet of solar sails could be timed to allow exploration of many small KBOs from a single launch. The natural continuation of this work can be extended in the following directions: i. Detailed research on materials for thermal desorption at temperature suitable for solar sailing; ii. consideration of the Sun as an extended source of radiation; iii. study the influence of solar sail surface oscillations on the motion of a spacecraft performing an interplanetary flight.

Interesting issues arise with a sail like this. The coating on the surface of the sail must be uniform, and in fact one would expect that slight variations will occur that can lead to trajectory deviations during the desorption process. Remember that the time of desorption acceleration is small, around 1500 seconds, in the configuration discussed here. The authors assume there would be a need for periodic corrections in the sail’s tilting angle as these deviations occur. You can also see how neat a fit this work makes with Kezerashvili’s earlier studies on navigation issues deep in a gravity well. An error in relativistic calculations close to the Sun could lead to substantial variations in the final trajectory.