Evidence for a Shift of Europa’s Icy Crust

A hypothesis about an astronomical object snaps into sharper detail when it can be tested. Thus the new findings on Europa and the movements of the ice shell that covers its ocean, which are the subject of a paper in Geophysical Research Letters. The work of Paul Schenk (Lunar and Planetary Institute, Houston) and colleagues, the paper argues that the shell has rotated by about 70 degrees during the last several million years. Clearly, such movement can only happen with a shell floating freely over a liquid ocean beneath, and Europa Clipper should be able to tell us more.

Remember, we are talking about a geologically young surface on this Jovian moon, as indicated by, among other things, the relative smoothness of the terrain and the paucity of impact craters. All that is consistent with ice in motion in one way or another. Schenk’s team homes in on large global-scale circular patterns that can be made out by reference to Galileo and Voyager data, previously identified features that could only have been formed during a reorientation of the shell. The process moves the outer shell with respect to the moon’s spin axis, and is known as true polar wander (TPW). The implications are striking, according to Schenk:

“Our key finding is that the fractures associated with true polar wander on Europa cross-cut all terrains. This means that the true polar wander event is very young and that the ice shell and all features formed on it have moved more than 70° of latitude from where they first formed. If true, then the entire recorded history of tectonics on Europa should be reevaluated.” 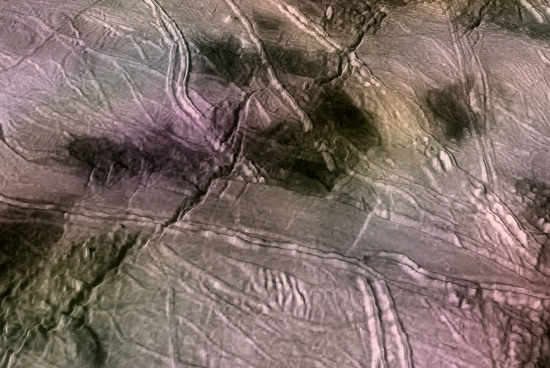 Image: Perspective views of fractures on the surface of Europa formed during true polar wander. The large cracks crossing the scene from left to upper right are ~3 kilometers (1.9 miles) wide and 200 meters deep. The double ridges crossing the scene are similar in width. Credit: P. Schenk/USRA-LPI.

The reorientation of an ice shell has been proposed for a variety of icy worlds, with the best cases, according to the paper, being made for Pluto and possibly Ganymede, the latter a world we’ll be able to analyze up close with the arrival of the JUICE mission in the 2030s. There is speculation about true polar wander as well on Miranda and Enceladus, among others.

Maps produced from Galileo and Voyager data are at the heart of this paper, as Schenk worked with Isamu Matsuyama (University of Arizona) and Francis Nimmo (UC-Santa Cruz) to correlate large fractures on the Europan surface with concentric circular depressions that had already been identified. The team analyzed the global map largely at 200-meter resolution, with highest-resolution in some areas reaching 40 meters per pixel.

The fracture systems are related to the circular true polar wander tectonic patterns previously found, according to the paper, and we can get a sense of their age because the fractures cut across all known terrains. The team concludes that the global orientation of the ice shell had to have been one of the last major events to occur on Europa. Moreover, the thickness of the ice shell, a key factor in any attempt to reach the ocean below, may have increased with time.

The spacecraft is to complete our map of Europa, including high resolution images of critical surface features, allowing scientists to determine more precisely the age of Europan fractures and depressions. From the preprint:

A return to Europa will be necessary to map out the full distribution of all known and candidate TPW-related features on Europa (including troughs, fissures, plateaus, folds, etc.) to determine their extent, stratigraphic ages, structural strain and other characteristics. These will constrain TPW processes and timing, as well as properties of the ice shell during the epoch in which they formed and will be key objectives of NASA’s Europa Clipper mission. Any putative previous TPW episodes may also be resolved in global high-resolution mapping in the form of cryptic troughs or fractures.

The paper is Schenk et al., “A Very Young Age for True Polar Wander on Europa from Related Fracturing,” in process at Geophysical Research Letters (abstract).

Next post: Far Ultraviolet Flares an Issue for M-dwarf Planets