SPARCS is the name of a CubeSat-based space mission out of Arizona State University, the acronym standing for Star-Planet Activity Research CubeSat, with astronomer Evgenya Shkolnik as principal investigator. The idea here is to look at ultraviolet flare activity on M-dwarf stars, a wavelength about which we could do with a great deal more information. The plan is to target specific stars that will be observed continuously over at least one complete stellar rotation, which could be anything from five to forty-five days.

That this is a good idea is borne out by what we are learning about GJ 887, also known as Lacaille 9352 and known to be orbited by at least two planets. Located in the southern constellation of Piscis Austrinus, the star has the fourth highest known proper motion, with parallax measurements indicating it is a bit less than 11 light years from the Sun. It is one of the brightest M-dwarfs in our sky. When TESS (Transiting Exoplanet Survey Satellite) fixed its gaze on GJ 887, it found no detectable flares over 27 days of continuous observation.

Which goes to show how much older data can help us. Fellow ASU astronomer Parke Loyd worked with Shkolnik and co-authors from the University of Colorado, Boulder and the Naval Research Laboratory (Washington DC) to demonstrate on the basis of Hubble Space Telescope data that GJ 887 is anything but a quiescent star. In fact, its flares occur on an hourly basis, the spikes in brightness showing up only at ultraviolet wavelengths. The paper on their findings has been published as a Research Note of the American Astronomical Society. Says Shkolnik:

“It is fascinating to know that observing stars in normal optical light (as the TESS mission does) doesn’t come close to telling the whole story. The damaging radiation environment of these planets can only fully be understood with ultraviolet observations, like those from the Hubble Space Telescope.” 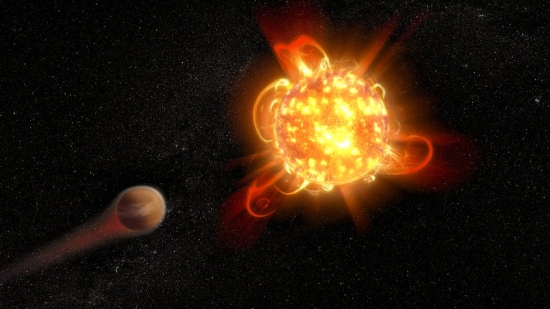 At an estimated age of 3 billion years, GJ 887’s lack of detectable flares and scarce rotational variability is belied by the Hubble findings, an indication that atmospheric erosion is a serious concern for the two and possibly three planets we thus far know about. We’re now learning that flare activity in the far ultraviolet (FUV) may be a feature of numerous M-dwarfs. Here is part of the paper’s Figure 1, illustrating how GJ 887 looks at these wavelengths.

The authors note that X-class solar flares, major events that can trigger long-duration radiation storms, are almost always accompanied by coronal mass ejections, and add that far ultraviolet flares with equivalent durations occur every few hours on other M-dwarfs across a wide range of emission levels and ages. The paper continues:

GJ 887’s similar rate of FUV flares strengthens the possibility that all early to mid M stars share the same FUV flare frequency distribution (FFD) when cast in equivalent duration. This universal M-star FFD implies that most of the molecule-splitting FUV photons M-star planets receive could be delivered in short, intense bursts that are not captured by sparse and brief FUV observations (Loyd et al. 2018a).

The paper speaks of the need to account for the “hidden UV lives” of M-dwarfs, whose radiation may have a great deal to say about photochemistry, heating and evaporation in the atmosphere of orbiting planets. At GJ 887, we may be looking at a system whose planets lost their atmospheres through erosion from such flares long ago. The goal of the SPARCS mission is to provide the extended observing time needed to extend our knowledge of flare activity on the most common type of star in the galaxy.

Next post: What If SETI Finds Something, Then What?

Previous post: Evidence for a Shift of Europa’s Icy Crust