A Deformed Protoplanetary Disk in a Triple Star System

This morning we have two interesting and complementary studies of GW Orionis to look at, both analyzing what is apparently a planet-forming disk with multiple, misaligned rings around this triple star system some 1300 light years from the Sun. In the more recent of the two, Stefan Kraus (University of Exeter) and colleagues used data from both the Atacama Large Millimeter/submillimeter Array (ALMA) and the European Observatory’s Very Large Telescope (VLT) in detecting warm gas at the inner edge of the misaligned ring, which has broken away from the larger disc, and scattered light from the warped disk surface.

So what could be going on at GW Orionis? What the images reveal is an evolving young system much different from our own. Consider: The inner stars GW Ori A and GW Ori B orbit each other at a separation of a scant 1 AU, while the third star, GW Ori C, orbits the inner stars at a distance of roughly 8 AU, the latter in an orbit that is not aligned with the plane of the inner duo. In our Solar System, we’re used to planets that move in roughly the same plane around the Sun. Here we see a deformed protoplanetary disk that may produce an utterly different result. 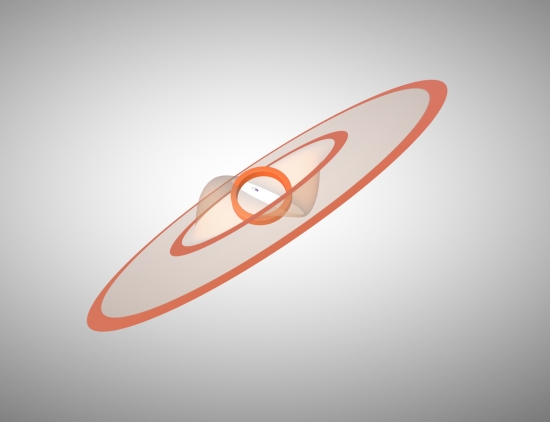 Image: Representation of the disc structure and stellar orbit of the GW Orionis triple system, as derived from the ALMA and VLT observations by Kraus et al. Orange rings are the (misaligned) rings seen by ALMA. The transparent surfaces correspond to the lower-density dust filaments that connect the rings and that dominate the emission in scattered light. Credit: Kraus et al., 2020; NRAO/AUI/NSF.

What an intriguing place to study planet formation, and to ponder scenarios as the system evolves. The ALMA data reveal three separate rings with different orientations, located at 46, 185 and 340 AU from the barycenter of the system. The inner ring is misaligned in relation not only to the outer two rings but also to the three stars. Says Kraus:

“In our images, we see the shadow of the inner ring on the outer disk. At the same time, ALMA allowed us to measure the precise shape of the ring that casts the shadow. Combining this information allows us to derive the 3-dimensional orientation of the misaligned ring and of the warped disk surface.” 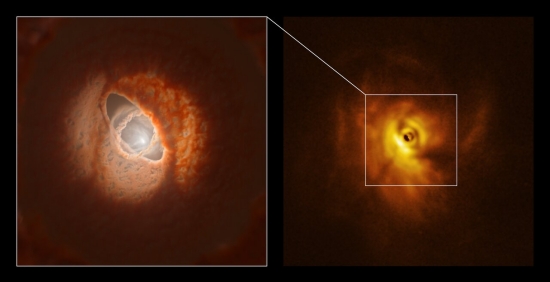 Image: New observations of GW Orionis, a triple star system with a peculiar inner region, revealed that this object has a warped planet-forming disk with a misaligned ring. The image on the right is from the SPHERE instrument on the European Southern Observatory’s Very Large Telescope, which allowed astronomers to see, for the first time, the shadows this ring casts on the rest of the disk. This helped the researchers figure out the 3D shape of the ring and the overall disk. The left panel shows an artistic impression of the disk’s inner region, including the ring, which is based on the 3D shape reconstructed by the team. Credit: ESO/L. Calçada, Exeter/Kraus et al.

Planets could well emerge here, with the research indicating that the inner ring contains about 30 Earth masses of dust. What’s intriguing is that any planets forming within this inner ring will orbit in a highly oblique fashion at wide separation from the star. Bear in mind that it’s now believed that more than half of the stars in the galaxy are born with one or more companion stars, making for the prospect of a large population of planets on highly inclined, distant orbits.

Kraus and team have been examining GW Orionis for over 11 years, mapping the gravitational interactions at work among the three stars over a full orbital period. It is clear that the stellar orbits are misaligned from each other and from the disk. We’re getting confirmation here through both observations and computer simulations that a theoretical ‘disk tearing effect’ is in play, one that emerges out of the gravitational pull of the three stars and causes the disk to break into separate rings. Observation of the shadow that the inner ring casts upon the rest of the disk was useful in calculating the shape of the ring and the overall disk structure. Moreover, the shape of the inner ring matches predictions of precisely how gravitational interactions would tear the original disk. 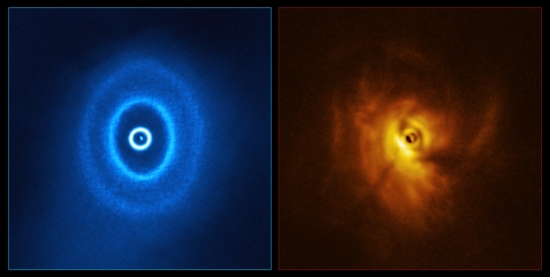 Image; ALMA and the SPHERE instrument on ESO’s Very Large Telescope have imaged GW Orionis, a triple star system with a peculiar inner region. Unlike the flat planet-forming discs we see around many stars, GW Orionis features a warped disc, deformed by the movements of the three stars at its centre. The ALMA image (left) shows the disc’s ringed structure, with the innermost ring separated from the rest of the disc. The SPHERE observations (right), repeated here for comparison, allowed astronomers to see for the first time the shadow of this innermost ring on the rest of the disc, which made it possible for them to reconstruct its warped shape. Credit: ALMA (ESO/NAOJ/NRAO), ESO/Exeter/Kraus et al.

The second team, led by Jiaqing Bi (University of Victoria, Canada), likewise used data from ALMA to observe the same disk misalignment, publishing their paper in May. This work confirms that the inner ring is misaligned relative to the outer ring and the three stars, with the outer ring being the largest yet observed in disks of this kind. Both teams used computer simulations to examine causes for the misalignment, with the Bi team suggesting a possibility that does not arise in the Klaus paper. This is team member Nienke van der Marel (University of Victoria):

“Our simulations show that the gravitational pull from the triple stars alone cannot explain the observed large misalignment. We think that the presence of a planet between these rings is needed to explain why the disk was torn apart. This planet has likely carved a dust gap and broken the disk at the location of the current inner and outer rings.”

Such a planet would be the first ever observed to orbit three stars. Moreover, it’s clear from the example of GW Orionis that stellar groupings like this can play havoc with the shape of a protoplanetary disk, doubtless producing worlds in highly inclined orbits around multiple stars. “We predict that many planets on oblique, wide-separation orbits will be discovered in future planet imaging campaigns,” says Kraus co-author and Exeter colleague Alexander Kreplin.