When we looked earlier this week at the Solaris mission, a concept designed to study the Sun’s polar regions, I commented on another early concept called the Auroral Reconstruction CubeSwarm (ARCS). The mission intrigued me because it consisted of CubeSats in swarm formation, working together with numerous ground observatories, to study the Earth’s auroras. The paradigm of miniaturization, low cost and creative design surfaces yet again in Janus, a proposal out of the University of Colorado at Boulder and Lockheed Martin that would involve twin spacecraft studying twin targets, the binary asteroids 1996 FG3 and 1991 VH.

Daniel Scheeres (CU-Boulder) is principal investigator for Janus, the plan being for the university to handle the analysis of data and images from the mission, with Lockheed Martin building and operating the two spacecraft. It should be a familiar role for both entities, as Lockheed Martin supports operations for OSIRIS-REx at asteroid Bennu, while Scheeres leads the radio science team for that mission. Each Janus spacecraft is roughly the size of a suitcase, a carry-on at that, echoing the theme of keeping spacecraft small and straightforward.

“We see an advantage to be able to shrink our spacecraft. With technology advancements, we can now explore our solar system and address important science questions with smaller spacecraft… We see this evolution to smaller and more capable spacecraft being a key market in the future for scientific missions. Now, we want to execute and show that we can do it.”

Lowering costs and preparation time by using off-the-shelf components is all part of the same parameter space that supports the movement toward CubeSats and so-called SmallSats. The mission will be part of NASA’s SIMPLEx program, which focuses on small spacecraft and satellites, and is projected to cost less than $55 million.

The twin Janus spacecraft have a long journey ahead, with a gravity assist at Earth following an initial solar orbit and a subsequent trajectory that takes them beyond the orbit of Mars. The craft are to use VACCO MiPS (Micro-Propulsion System), a low-cost, cold gas propulsion option designed for CubeSats consisting of five thrusters for pitch, yaw, roll and delta-v.

Malin Space Science Systems is to provide the instrument suite including visible and infrared cameras, with power delivered by three deployable solar arrays and batteries. Launch is to be in 2022, with the twin craft lofted as secondary payloads on a Falcon-Heavy (Block 5) in the same launch that will carry the Psyche and EscaPADE missions.

From a short summary presented at the 51st Lunar and Planetary Science Conference (2020):

Janus science will combine flyby observations of the target binary asteroids with ground-based observations, enabling the high resolution imaging and thermal data to be placed into a global context and leveraging all available data to construct an accurate topographical and morphological model of these bodies. Based on these measurements, the formation and evolutionary implications for small rubble pile asteroids will be studied. 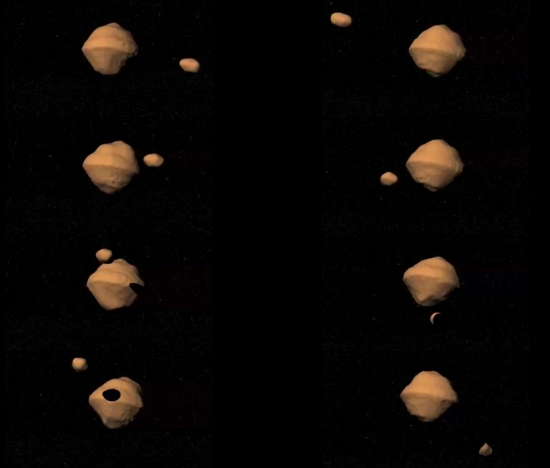 Binary asteroids have yet to be studied up close, but this is a configuration that represents about 15 percent of the asteroids in the Solar System. Says Scheeres:

“We think that binary asteroids form when you have a single asteroid that gets spun up so fast that the whole thing splits in two and goes through this crazy dance… Once we see them up close, there will be a lot of questions we can answer, but these will raise new questions as well. We think Janus will motivate additional missions to binary asteroids.”