Io, Jupiter’s large, inner Galilean moon, is the very definition of a tortured surface, as seen in the image below, taken by the Galileo spacecraft in 1997. Discovering volcanic activity — and plenty of it — on Io was one of the early Voyager surprises, even if it didn’t surprise astrophysicist Stanton Peale (UC-Santa Barbara) and colleagues, who predicted the phenomenon in a paper published shortly before Voyager 1’s encounter. We now know that Io is home to over 400 active volcanoes, making it the most geologically active body in the Solar System.

We’re a long way from the Sun here, but we know to ascribe Io’s surface upheaval to tidal heating forced by the presence of Jupiter as the gravitational forces involved stretch and squeeze not just Io but, of course, Europa, Ganymede and Callisto, all of them interesting because of the possibility of liquid oceans beneath the surface. Io is close enough to the giant world that rock can be melted into magma, but it’s the ice under more distant Europa that gets the lion’s share of interest because of its astrobiological possibilities. And now we learn that not just Jupiter but the other Jovian moons may be involved in significant tidal heating effects. 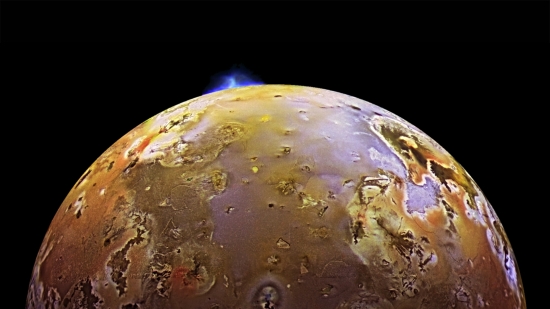 Image: NASA’s Galileo spacecraft caught Jupiter’s moon Io, the planet’s third-largest moon, undergoing a volcanic eruption. Locked in a perpetual tug of war between the imposing gravity of Jupiter and the smaller, consistent pulls of its neighboring moons, Io’s distorted orbit causes it to flex as it swoops around the gas giant. The stretching causes friction and intense heat in Io’s interior, sparking massive eruptions across its surface. Credit: NASA.

In the paper on this work, recently published in Geophysical Research Letters, lead author Hamish Hay (JPL) refines graduate work he performed at the University of Arizona’s Lunar and Planetary Laboratory. The scientists have found that the tidal response to other moons is surprisingly large, and consider it an important factor in the evolution of the satellite system at Jupiter, which comprises almost 80 moons in its entirety. Subsurface oceans could be maintained only through a balance between internal heat and its dissipation, so we need to know where this heat comes from and how it is distributed to understand these oceans.

Resonance appears to be the key. Push any object and let go and you create a wobble at the object’s own natural frequency. Hay uses the example of pushing a swing to explain it: Keep pushing the swing at that frequency and the resulting oscillations increase. Push at the wrong frequency — or in Hay’s analogy, push the swing at the wrong time — and the swing’s motion is dampened. In the case of the Jovian moons, the depth of a subsurface ocean determines the natural frequency of each of the moons the team studied. Says Hay:

“These tidal resonances were known before this work, but only known for tides due to Jupiter, which can only create this resonance effect if the ocean is really thin (less than 300 meters or under 1,000 feet), which is unlikely. When tidal forces act on a global ocean, it creates a tidal wave on the surface that ends up propagating around the equator with a certain frequency, or period.”

Image: The four largest moons of Jupiter in order of distance from Jupiter: Io, Europa, Ganymede and Callisto. Credit: NASA.

Hay and company are arguing that each Galilean moon raises tides on the others, even if we’ve ignored the process in the past because Jupiter’s gravitational effects are obviously so huge. The researchers have modeled subsurface tidal currents to study how the resonant response of an ocean shows up in the generation of tidal waves that can release significant amounts of heat into the oceans and crusts of Io (where the ocean is thought to be magma) and Europa.

The result: Jupiter alone, in this modeling, cannot account for tides of the right frequency to cause the necessary resonance to maintain the internal oceans we believe exist among these moons, because the oceans we predict under the ice on moons like Europa are simply too deep. The gravitational effects of other moons have to be added to those of Jupiter to produce the requisite tidal forces. The resulting tidal resonance produced by Jupiter and the other moons produces oceans stable over geological time that must be tens to hundreds of kilometers deep.

If this is correct, there should be observable effects on the surface, opening the way for new observations as future spacecraft explore the Galilean moons. From the paper:

Additional observable signatures may emerge if an ocean is nearly resonant. The dominant modes due to moon forcing are westward‐propagating tidal waves. These waves produce unique, zonally symmetric patterns of time‐averaged heat flux, with heating focused toward low latitudes and peaking either side of the equator (Figure 3b). Heightened geological activity at low latitudes would be expected from such a distribution of heat flow, which has been suggested from the locations of chaos terrains on Europa (Figueredo & Greeley, 2004; Soderlund et al., 2014) and volcanism on Io (Mura et al., 2020; Veeder et al., 2012), although the polar coverage is poor. The crust would correspondingly be thinner at low latitudes, which could be observable using gravity and topography data. Small‐scale turbulent mixing in the ocean may act to diffuse this heating pattern…

The heating pattern explored in this paper is, the scientists say, significantly different from the tidal heating forced by Jupiter in the crust, which tends to be enhanced toward the poles. The authors see consequences for the ambient magnetic field that the paper explores, and which would be within the sensitivity of the magnetometer to be flown aboard the upcoming JUICE mission, and probably within range of the instrumentation on Europa Clipper.

There are interesting exoplanet implications here as well. Note this:

Our study suggests for the first time a mechanism where the ocean could play a crucial role in the heat budget of the Galilean moons, as opposed to previous studies limited to diurnal frequencies where dissipation is often negligible (e.g., Chen et al., 2014; Hay & Matsuyama, 2019a). In light of this, reexamination of evolution models may be needed in the future. The effect of moon‐moon tides may be even larger in the TRAPPIST‐1 system if any of the planets contain significant bodies of liquid, as has been suggested (Grimm et al., 2018). The habitability of closely packed ocean worlds may depend on these tides.