Radar for a Giant Planet’s Moons

One of my better memories involving space exploration is getting the chance to be at the Jet Propulsion Laboratory to see the Mars rovers Spirit and Opportunity just days before they were shipped off to Florida for their eventual launch. Being near an object that, though crafted by human hands, is about to be a presence on another world is an unusual experience, one that made me reflect on artifacts from deep in the human past and their excavation by archaeologists today. Will future humans one day recover our early robotic explorers?

That reflection was prompted by news from JPL that engineers have delivered the key elements of a critical ice-penetrating radar instrument for the European Space Agency’s mission to three of Jupiter’s icy moons. JUICE — JUpiter ICy moons Explorer — is scheduled for a launch in 2022, with plans to orbit Jupiter for three years, involving multiple flybys of both Europa and Callisto, with eventual orbital insertion at Ganymede. Analyses of the interiors as well as surfaces of the three moons should vastly improve our knowledge of their composition. 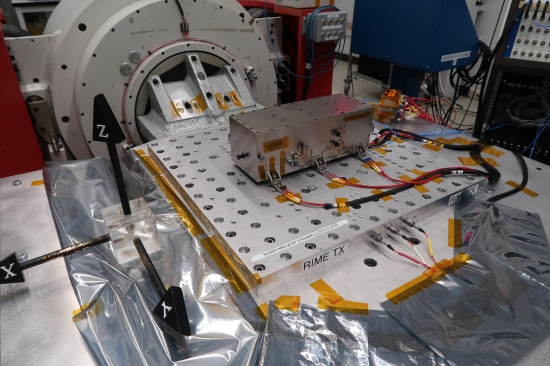 Image: NASA’s Jet Propulsion Laboratory built and shipped the receiver, transmitter, and electronics necessary to complete the radar instrument for Jupiter Icy Moons Explorer (JUICE), the ESA (European Space Agency) mission to explore Jupiter and its three large icy moons. In this photo, shot at JPL on April 27, 2020, the transmitter undergoes random vibration testing to ensure the instrument can survive the shaking that comes with launch. Credit: NASA/JPL-Caltech.

Here again we’re looking at something in the hands of humans on Earth that will one day move out beyond our orbit, in this case to the moons of our system’s largest planet, sending back priceless data. On a practical level, this is what people in the space exploration business do. On the level of sheer human response, my own at least, looking at how we build our spacecraft puts a bit of a chill up my spine, the good kind of chill that signals being in the presence of something profound, something caught up in what seems a hard-wired human need to explore.

The words “ice-penetrating radar” should resonate among all of those who wonder about the ocean under the ice at Europa. But of course we also have reason to believe that both Ganymede and Callisto have oceans whose depths we have yet to measure. Getting a sense for how thick the ice is on these worlds will be part of what the JUICE mission’s RIME instrument will, we can hope, deliver. RIME — Radar for Icy Moon Exploration — is said to have the capability of sending out radio waves that can penetrate up to 10 kilometers deep, reflecting off subsurface features and helping us figure out the thickness of the ice. 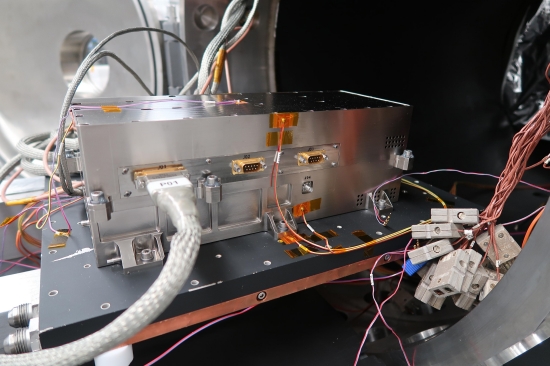 Image: The Radar for Icy Moon Exploration, or RIME, instrument is a collaboration by JPL and the Italian Space Agency (ASI) and is one of ten that will fly aboard JUICE. This photo, shot at JPL on July 23, 2020, shows the transmitter as it exits a thermal vacuum chamber. The test is one of several designed to ensure the hardware can survive the conditions of space travel. The thermal chamber simulates deep space by creating a vacuum and by varying the temperatures to match those the instrument will experience over the life of the mission. Credit: NASA/JPL-Caltech.

And as we all know, work on anything these days is complicated by COVID-19, with many JPL employees forced to work remotely, and necessary delays to equipment testing including vibration, shock and thermal vacuum tests to ensure the equipment is ready for the deep space environment. The engineers returning to work after the delay under new safety protocols faced a tight schedule, but they made it work. JPL delivered the transmitter and receiver for RIME along with electronics necessary for communicating with its antenna.

“I’m really impressed that the engineers working on this project were able to pull this off. We are so proud of them, because it was incredibly challenging. We had a commitment to our partners overseas, and we met that – which is very gratifying.”

Gratifying indeed, and a reminder that along with JUICE, we can also anticipate NASA’s Europa Clipper, set to launch some time in the mid-2020s. Europa Clipper should arrive about the same time as JUICE, and will perform multiple flybys of Europa. Will we be able to determine the thickness of Europa’s frozen surface from the combined data of both missions? A relatively thin crust would make for the possibility of eventual penetration by instruments for a look at what lies beneath, but a shell of 15 to 25 kilometers in thickness would call for other strategies. 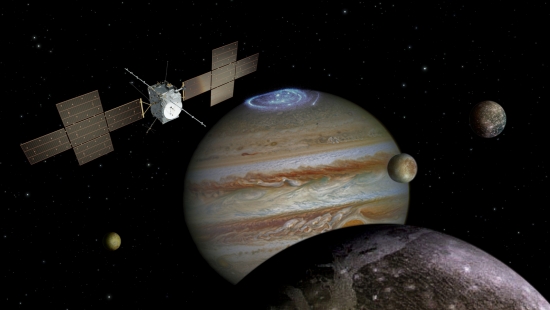 Next post: K2-315b: Tight Orbits and the Joy of Numbers