K2-315b: Tight Orbits and the Joy of Numbers

The newly found planet K2-315b catches the eye because of its 3.14-day orbit, a catch from the K2 extension of the Kepler Space Telescope mission that reminds us of a mathematical constant. As I’m prowling through David Berlinski’s Infinite Ascent (Modern Library, 2011), a quirky and quite lively history of mathematics at the moment, the references to ‘pi in the sky’ that I’m seeing in coverage of the discovery are worth a chuckle. Maybe the Pythagoreans were right that everything is number. Pythagoras would have loved K2-315b and would have speculated on its nature.

After all, as Berlinski notes about Pythagoras (ca. 570 to ca. 490 BCE) and his followers, they were devoted to what he calls ‘a higher spookiness”:

The Pythagoreans never succeeded in explaining what they meant by claiming that number is the essence of all things. Early in the life of the sect, they conjectured that numbers might be the essence of all things because quite literally “the elements of numbers were the elements of all things.” In this way, Aristotle remarks, “they constructed the whole heaven out of numbers.” This view they could not sustain. Aristotle notes dryly that “it is impossible that [physical] bodies should consist of numbers,” if only because physical bodies are in motion and numbers are not. At some time, the intellectual allegiances of the sect changed and the Pythagoreans began to draw a most Platonic distinction between the world revealed by the senses and the world revealed by the intellect.

And we’re off into weird metaphysics, down a historical rabbit hole. But enough of the Pythagorean buzz with numbers remains that to this day we love the odd coincidence. Hey, K2-315b is the 315th planetary system discovered inside the K2 data, a near miss from 314. MIT’s Julien de Wit, a co-author of the paper on this discovery, points out that “everyone needs a bit of fun these days,” and it’s a reference to the paper’s playful title: “π Earth: A 3.14 day Earth-sized Planet from K2’s Kitchen Served Warm by the SPECULOOS Team.” MIT graduate student Prajwal Niraula is lead author of the paper, published in the Astronomical Journal. 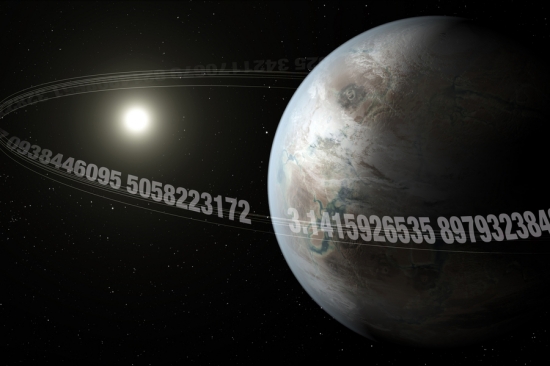 Image: Scientists at MIT and elsewhere have discovered an Earth-sized planet that zips around its star every 3.14 days. Credit: NASA Ames/JPL-Caltech/T. Pyle, Christine Daniloff, MIT.

What we know about K2-315b is that its radius is about 0.95 that of Earth and, importantly, that it orbits a cool, low-mass star about a fifth of the Sun’s size. Its mass has yet to be determined, but as MIT press materials point out, its surface temperature is around 450 K, which is about where you want your oven to be if you’re baking an actual pie. There is little likelihood of any lifeforms on this planet capable of groaning at puns, though I do think the discovery is helpful because it’s yet another case of an ultracool dwarf star that may be a target for the James Webb Space Telescope. Large transit depths make for interesting studies of planetary atmospheres.

I try to keep up with SPECULOOS, another wonderful acronym: Search for habitable Planets EClipsing ULtra-cOOl Stars. Here we’re dealing with four 1-meter telescopes at Chile’s Paranal Observatory in the Atacama Desert, and a more recently included fifth instrument called Artemis in Tenerife, Spain. The observing effort is led by Michael Gillon (University of Liège, Belgium) and conducted in collaboration with various institutions including MIT and the University of Bern, along with the Canary Islands Institute of Astrophysics and the European Southern Observatory.

Image: The SPECULOOS project aims to detect terrestrial planets eclipsing some of the smallest and coolest stars of the solar neighborhood. This strategy is motivated by the unique possibility to study these planets in detail with future giant observatories like the European Extremely Large Telescope (E-ELT) or the James Webb Space Telescope (JWST). The exoplanets discovered by SPECULOOS should thus provide mankind with an opportunity to study the atmosphere of extrasolar worlds similar in size to our Earth, notably to search for traces of biological activity. Credit: SPECULOOS.

The K2-315b work spanned several months of K2 observation from 2017 in which 20 transit signatures turned up with a repetition of 3.14 days. At this point, closer examination relied upon tightening the transit time even further, as co-author Benjamin Rackham points out:

“Nailing down the best night to follow up from the ground is a little bit tricky. Even when you see this 3.14 day signal in the K2 data, there’s an uncertainty to that, which adds up with every orbit.”

Fortunately, Rackham had developed a forecasting algorithm to pin the transits down, and subsequent observations in February of 2020 with the SPECULOOS telescopes nailed three transits, one from Artemis in Spain and the other two from the Paranal instruments. The paper points out that differences in atmospheric “mean molecular mass, surface pressure, and/or
cloud/haze altitude will strongly affect the actual potential of a planet for characterization,” with ramifications for the study even of promising worlds like those circling TRAPPIST-1.

Nonetheless, K2-315b (referred to in the K2 data as EPIC 249631677) looks intriguing enough for JWST observations to be considered:

With an estimated radial velocity semi-amplitude of 1.3 m s−1 (assuming a mass comparable to that of Earth), the planet could be accessible for mass measurements using modern ultra-precise radial velocity instruments. Such possibilities and a ranking amongst the 10 best-suited Earth-sized planets for atmospheric study, EPIC 249631677 b will therefore play an important role in the upcoming era of comparative exoplanetology for terrestrial worlds. It will surely be a prime target for the generation of observatories to follow JWST and bring the field fully into this new era.

Note that reference to ‘comparative exoplanetology.’ Not all exoplanets singled out for atmospheric characterization are going to be ‘habitable’ in the sense of life as we know it. After all, we began using transmission spectroscopy to study atmospheres by working with ‘hot Jupiters’ like HD 209458b. We learn as we go, and firming up our methods by studying small planets around ultracool dwarf stars within 100 parsecs or so is part of the path toward finding a living world.

Next post: The Technological Indispensability Hypothesis: An Addendum to ‘Bound in Shallows’